Update, January 11, 2014. Please excuse the broken links in this post. As you know from consulting my "Profile," I have lost access to my former domain name, atfirstglass.com. I plan to upload the Thanksgiving favorites from six years' worth of At First Glass, to Pluot as soon as possible. 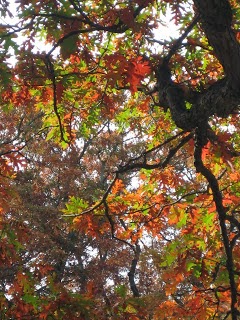 Here at At First Glass our page views begin steadily rising in about mid-October, and they carry on rising, going from strength to strength you might say -- in the spirit of Bertie Wooster and his Scripture Knowledge prizes -- until the day after Thanksgiving, when they plummet return quite to normal.


What the autumnal uptick in traffic means, of course, is that more people than usual are surfing the web looking for Thanksgiving recipes and wine pairing advice. Some of them happen to come to me. Perhaps I had better go easy on the "my fatheads" wheeze, so as not to non-plus the newcomers. Anyway to make the searching more efficient I thought I may as well create a handy little index, below, of the posts that seem to be the most consulted at this time of year. I would not dream of quoting the vigorous teen cook  Tilly, of Aunt Jo's Scrap-Bag VI: an Old-Fashioned Thanksgiving by Louisa May Alcott (I kid you not),
" 'Come now, if you want roast turkey and onions, plum puddin' and mince pie, you'll have to do as I tell you, and be lively about it!' "

If you care to read the whole of Aunt Jo's Old Fashioned Thanksgiving (the Scrap-Bag dates from 1872-82), you may find it at Google books. I wonder if Louisa May Alcott might have missed her true calling -- remember how her alter ego character, Jo March, was always fretting about betraying her art in writing sensational garbage for The Weekly Volcano? --  I wonder if she should have been a cookery writer, to join those noble nineteenth century ranks that included Mary Randolph (Virginia Housewife), Eliza Leslie, Lydia Maria Child (The Frugal Housewife), and Fannie Farmer. If you think about it there is quite a bit of food writing in Little Women, from the March girls' donated Christmas breakfast to Amy's pickled limes to the newlywed Meg's failed currant jelly; the high point of the book's foodie subtheme must be Jo's ruined banquet of overboiled asparagus, overrisen bread and salted strawberries (" 'don't try too many messes, Jo, for you can't make anything but gingerbread and molasses candy fit to eat' "). Likewise, the climax of An Old Fashioned Thanksgiving is a disastrous dinner cooked by teenagers unsupervised because Mother and Father are temporarily away. These young people are tough souls from a different era, however, "old fashioned" even to Alcott. They have already begun a snowy November day by breaking the ice in the water pitchers in their upstairs bedroom, so as to wash properly and come down to breakfast "with their cheeks glowing like winter apples." After chores and a lunch of doughnuts, cheese, and cider, it's time to set-to about dinner. They will cook, positively medieval style, over an open fireplace. While wearing long gowns and aprons, remember. We modern milquetoasts have to look up the word "andiron" in a dictionary, for a start.


Prue obediently tugged away at the crane, with its black hooks, from which hung the iron tea kettle and three-legged pot; then she settled the long spit in the grooves made for it in the tall andirons, and put the dripping pan underneath, for in those days meat was roasted as it should be, not baked in ovens.

Meantime Tilly attacked the plum pudding. She felt pretty sure of coming out right, here, for she had seen her mother do it so many times, it looked  very easy. So in went suet and fruit; all sorts of spice, to be sure she got the right ones, and brandy instead of wine. [Mem.: note the rich ingredients ready to hand.] But she forgot both sugar and salt, and tied it in the cloth so tightly that it had no room to swell, so it would come out as heavy as lead and as hard as a cannon ball, if the bag did not burst and spoil it all. Happily unconscious of these mistakes, Tilly popped it into the pot, and proudly watched it bobbing about ....

As the story moves on Mother and Father unexpectedly return, bringing the entire mountain clan with them in two sleighs. The iron-souled and busily cooking young folks had already planned to serve forth at five p.m., which is considered late and "genteel." The various details of the ruined dinner are more or less interchangeable with those of Jo's luncheon in the "Experiments" chapter of Little Women. Tilly put catnip and wormwood in the turkey stuffing, because up in the dim larder those "yarbs" looked so like mint and pennyroyal; and the turkey scorched on one side because the girls forgot to turn the spit. Just as Jo's suburban meal ended in good-natured laughter, "bread and butter, olives and fun," so the Bassett Thanksgiving finishes with a surprising amount of equanimity or even, as Bertie might say, dashed sang-froid. I would have expected hardscrabble farmers to be appalled by the young folks' waste of food, never mind the good intentions. No. Everyone laughs, eats apples and drinks cider, and dances and plays the  mysterious parlor games Hunt-the-Slipper and "Come, Philander." Meanwhile we moderns can't help but wonder, in a juvenile sort of way -- how is this family of fifteen, give or take an Aunt or two, also seeing to the needs of the body on a snowy November night? Tough souls. 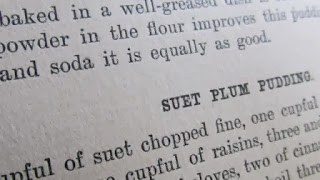 A glance at The White House Cook Book, circa 1910 (judging by the photos, Edith Roosevelt seems to have been the current First Lady). Look at that thick paper and the beautiful, firm type.
at January 11, 2014