Porcupine balls (you know you want some)

These are actually "Porcupine meat balls," but the other sounds so much more fun.

The recipe comes from an old classic of American cookery, the famed Settlement Cookbook. I had always wanted to have a look at this, and a few months ago I found the 1976 revised edition at a library cast-off book sale. The introduction tells the simple tale of Milwaukee's Settlement House, a place for new immigrants to learn English, cooking, sewing, and citizenship around the turn of the 20th century. Upstanding volunteer ladies from the community taught the cooking classes, and one of them, Mrs. Simon Kander, decided to put all the recipes together in a booklet, both to sell and so raise funds for the House, and to relieve students of the need to copy down all their meal instructions from a classroom blackboard. The first edition of The Way to a Man's Heart ... the Settlement Cookbook was published in 1901; by 1909, profits from the cookbook's sales "were able to provide the site for a new building" for the institution. My edition, seventy years on, is the thirty-third.

This cookbook, therefore, shows its provenance from page one. It is filled with recipes that were tasty enough and simple enough to be taught, shared, and eaten by multitudes of working families over the course of many years. "Mrs. Kander," it seems, insisted "that every recipe be tested not once but many times by committee members in their own kitchens." It makes the cookbook an invaluable one, and completely different from those wonders, so preponderant on bookstore shelves, which are created as works of art in themselves -- notice how often cookbooks have a theme -- by professionals whose (delicious) recipes are also works of art, but whose delicious recipes end up being usable sometimes only as an afterthought. Or as a performance.

Porcupine meat balls are an example of something I doubt we would find in a cookbook with a more artistic pedigree. They are not pretty, they are simple and the first ingredient on the list is something from a can. Nevertheless -- well, judge for yourself:

You begin with a 10 ounce can of tomato soup, diluted with a half cup of water. Put this in a large saucepan, and bring it to a boil. You will use this to simmer the meatballs. (Since commercial soups are full of gluten, I substituted two cans of stewed tomatoes.)

Make the meatballs: you will need 1 and 1/2 pounds of ground beef, 1/2 cup raw rice, 1 Tablespoon minced onion, 1/2 teaspoon allspice, 1 teaspoon salt, and 1/4 teaspoon pepper. Mix all ingredients and shape into small meatballs. Drop them into the simmering soup or tomatoes. Let them simmer for 2 hours, stirring occasionally. The long cooking time is required to fully cook the raw rice. If the liquid boils too violently, the rice will plump up too fast and a lot of it will loosen from the meatballs and fall into the sauce. 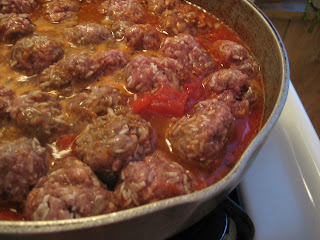 The "porcupine" name comes from the way the rice sticks out from all over the meatballs. The cookbook doesn't explain this, but you see how bright I am. And their delicious flavor is owing, I think, to the combination of tomatoes and allspice. Two hours later, we ate them with mashed potatoes on the side. 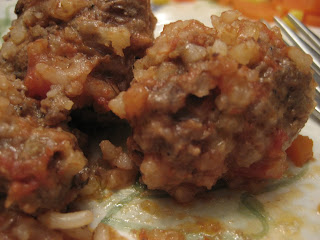 The wine we poured was a Bolla valpolicella ($7.99), from Italy by way of the local grocery store. My notes for it say:

A sweeter wine might have been a better complement to the acidic tomatoes in this dish. What would Mrs. Simon Kander have served? In the "Beverages" section she -- or one of her committee ladies -- writes a brief half-page on wine service, acknowledging that "wine makes even the simplest meal taste better" and suggesting the traditional, unfussy pairings of a previous era: sherry with soup, sauternes with fish (again!), claret with beef, champagne with everything. Far more space here is devoted to cocktails. Some previous reader has put an enthusiastic checkmark next to the recipe for Pink Lady, a tipple that calls to mind glittery 1930s romantic comedy movies. (It does sound good. Gin, apple brandy, lime juice, grenadine, and an egg white.)

And is this the same reader who actually, selfishly cut out six pages of chicken recipes from the book? Everything from pages 308 to 315 is gone. I hope, in some terribly hot kitchen in the next world, Mrs. Kander is giving her what for.