Incredible that I forgot lemon bars

My daughter wants the recipe for lemon bars. There is only one recipe, of course, my own. I thought it would be the work of a moment to rummage among the 600+ posts I had to upload overnight, into Pluot, when poor old At First Glass went kaphut at the loss of the domain name. And yet lo! Search though I might, it seems I forgot to import "At First Glass turns four -- and bakes those classic lemon bars," which first swam into our ken on New Year's Day, 2012.

Now we might think lemon bars are too ordinary to be worthy of discussion. Who has not learned to make them in a long-ago junior high school home ec. class? Who has not enjoyed them at dozens of Fourth of July picnics and PTA bake sales ever afterward? Here we are, on At First Glass's fourth anniversary, mucking about with (appropriately enough, to be sure) preschool-level treats while grander blogs are fishing ("crabbing") for their own Dungeness crabs, making green lentil soup with curried brown butter, or serving up orange-clove chocolate chip pancakes with coffee-clove syrup.

Yet I submit them, for a variety of reasons. They are simplicity itself. They are a delight to prepare, requiring the use of only one mixing bowl, which can do double duty for the preparation of both crust and filling. There is no need to fuss with softening or creaming butter, nor with greasing a baking pan. Made with fresh squeezed lemon juice, they are the most scrumptious morsels imaginable -- as with so many delicious things, it is their great buttery richness which satisfies you and prevents you from devouring the entire plateful.

And why else? Once upon a time, I made these for some evening PTA function. They lay, all anonymous and humble and ready for any hand to choose among them. People milled about in the blaringly lit, crowded gymnasium, mothers, fathers, grandparents, children. Preschoolers. I happened to be standing chatting with someone, when I saw a woman pick a lemon bar, take a bite of it, pause, and then throw it in the closest garbage can.

Witnessing that, I could only guess that this poor soul had never tasted good, properly made lemon bars before. Are they available in a box mix? Probably. Was that all she knew? Perhaps. It must have been the intense, unaccustomed flavor that put her off -- or perhaps she didn't like lemon and didn't realize until too late what these were. But how could anyone not know? Had she missed that day in Mrs. Pemberton's home ec. class? Is her name legion? All the more reason for me to do my small part today in getting the word out, to dear poor souls everywhere, about this great, commonplace, origins-lost-in-the-mists-of-culinary-prehistory cookie bar.

Work in with your fingers until the mixture is moist and crumbly:
1 cup (2 sticks) butter


Divide the dough in half simply by taking it up in fistfuls and putting it alternately in the two pans. Pat the dough down and bake each pan 15 to 20 minutes. Remove from oven.

Pour the filling over the partially baked crusts. Return to the oven and finish baking for 18 to 20 minutes, until the bars shrink away from the sides of the pan and the edges toast just a little. Let them cool before sprinkling with powdered sugar. 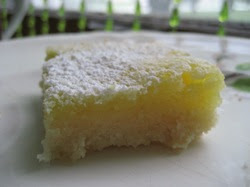 Postscript: do we dare mess with such beauty? Years ago, as Chicago Baking Examiner, I shoehorned this recipe into Examiner.com's random "Vodka month" theme by suggesting a vodka icing to replace the dusting of powdered sugar the bars usually receive. A plain sweet icing starts with 3 Tablespoons of hot water in a bowl, to which about 2 and 1/2 cups powdered sugar is added; you beat the mixture until it reaches a good consistency for spreading or drizzling. Any liquid may be substituted for the hot water, depending on the flavors in the baked treat you plan to glaze. And so, -- vodka with lemon? Or gin ....
at November 14, 2018 No comments:

First time at a Latin Mass

I attended a Latin Mass for the first time, at St. Joseph Church in Rockdale, about half an hour east of me, a tiny old village caught up on some very steep hills between the I-80 expressway and the Des Plaines River, south of Joliet. A small, old church, in the old, spangled-ceiling and Corinthian (golden) capital style; about 150 people, of the same wide variety of ages as in any parish, including quite a few obviously growing young families. Many women and girls wore chapel veils, even little toddler girls in pink. Each (somewhat rickety) pew had large missals full of golden-bordered photographs, not only of priests at various parts of the Mass, but also of ancient illuminated manuscripts; at the beginning of this Saint Edward Campion Missal was an exhortation from the publishers hoping that many more houses would take care to reprint these ancient and beautiful testimonies.

We were celebrating today, bizarrely but for a sound procedural or calendrical reason, the Fifth Sunday after Epiphany ... there was an altar rail. Everyone knelt by fives and sixes. No one says "Amen." There is no question of a chalice and communion in both kinds. Ten people indifferently dressed do not pump hand sanitizer beforehand, and do not then drink down the last of the "Precious Blood" in a hallway after. No cell phones rang, although I imagine they must do sometimes.

Above all else I was impressed, not so much by the Latin, which after all does cloak meaning, and not even by the invisible and modestly talented choir (though that was a relief). I found myself impressed by the altar servers. They were four young men, plus a boy and an even smaller boy, and what I think is a "subdeacon," a man around fifty who stood and simply faced the congregation a lot. So much for the Novus Ordo caterwaul about girls "stepping up to serve" because the boys won't. The boys will serve, I daresay, if the job is serious and they are treated seriously about it. They were dressed in the old style, black cassock and white surplice, not the vague sort of baptismal shift a la Jesus Christ Superstar in 1972, that looks all right for boys and for girls with their hair hanging down their backs, and they had full jobs to do: much kneeling, incensing, bowing, and holding out of thick beribboned book. One young man corrected a boy's mistake with just one flaming eye, it seemed to me. Here is continuity, it seemed to me: at least a chance that these are tomorrow's priests, whereas the altar girls can only be the mothers of tomorrow's altar girls -- which is exactly what they brag about on FaceBook.

And I don't for a moment hold that the Novus Ordo Mass is not the same as the "TLM," the Traditional Latin Mass. Clearly, behind the Latin, they are essentially the same, especially since more traditional translations have been put into use in the last ten years or so. What must be done away with next, I hope, is the excessive lay participation. The six altar servers today were like a liaison between the priest's work at the altar, and us. They left us free to be the faithful. Incessant lay participation is oppressive and the seedbed of irreverence. They gum up the work because where they want to serve, the work must be altered for them. If nothing else, they alter it by their appearance, their attitude, and their numbers.

All that aside, I can begin to appreciate why so much of the Mass used to take place behind a "rood screen" in English churches for example, for it may as well do so. The men at the altar -- climbing the mountain, facing east with us and for us -- need scarcely turn around at all. And I can understand why Henry VIII and Anne Boleyn and other woolgathering types would have exchanged love notes scribbled in their very Psalters during, or why young Italian dandies in particolored hose might have wandered in whenever they liked, to see who was there. Yes, the vernacular was a good thing, for it had to have refocused comprehension.

This experience also makes my grandmother's old Missal all the more useful, for it is the English-language "TLM," for the full year, forever. I wonder if "our Lord" -- as today's Father only ever called him during his homily, and as my own father only ever called him -- he was never the casually familiar "Jesus" -- would permit me to read those Masses whenever I like, and if he would count them as such. 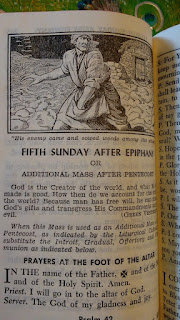