A fine how do you do 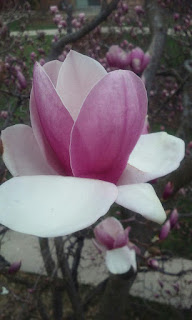 Well! my fatheads. This is a fine how do you do. I am distracted because I have to move. I mean, actually move, change house, live in another place. Out of the blue. Granted I was not planning to stay here forever -- so true of all of us! -- but still, another year living virtually in the branches of a magnolia tree, with some leisure to plot my future, would have been nice. How often do we get a chance to look over at a new bird, a chipping sparrow, perched on a branch not five feet away? You can spot them by the reddish orange cap on their heads, and their delicately striped gray-brown wings, gray belly, and tiny size. That is, provided you live in the branches of a mature magnolia. 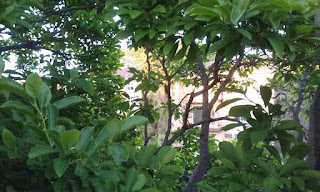 No more of that. Some sort of glamorous, hard edged property management company has taken over this rustic but agreeable apartment complex, so it's in with the remodeling and stainless steel appliances and charcoal-gray decor, and out with -- well, with the tenants who can't afford the rent for the upgrades. Not to mention that even if you wish to stay, they shall move you out of your unit in order to remodel that, and chuck you into a new one, and you never return to the third floor magnolia tree. So true of all of us. 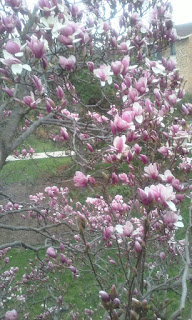 This gives one the new experience, however, of house-hunting. (One makes the decision: good grief, for that kind of rent, I may as well try to buy.) One learns about mortgage pre-approval, and especially about property taxes, which in the end seem to be all that matter.  One meets realtors, and sees the inside of houses and condos. There is the constant mental grappling with trade-offs, which is of course the basis of all economics. The ease of a condo versus the work of a house; can a balcony substitute for a yard -- perhaps for quite a long time? What's the point of paying a mortgage just for an interior? Then again, who wants to come home from work and do nothing but serve the house? And how is it that Colette ended up in a stone-flagged cottage in Provence, surrounded by lavender and olive trees, all on a rock blown clean by the Mistral? 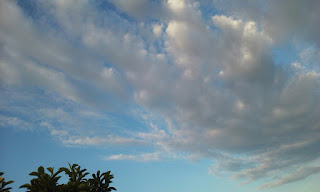 I believe she is the one who scoffed at Virginia Woolf's yearning for a room of one's own. No, she said, better a villa of one's own, with a cook, a gardener, and a good-looking man. 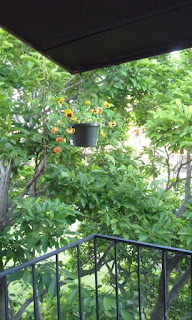 She may have said "boy," in fact, but that is hardly an appealing image. I will let you know how the condo inspection goes today ....

Email ThisBlogThis!Share to TwitterShare to FacebookShare to Pinterest
Labels: life, the move, unpolished 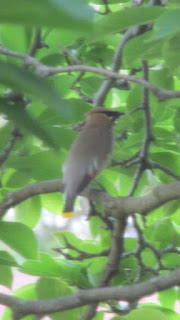 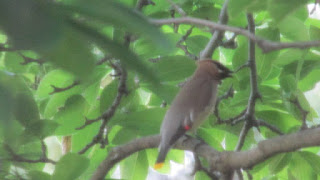 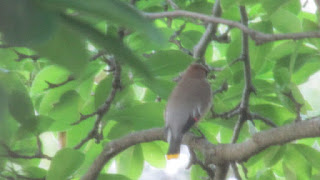 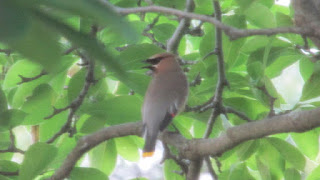 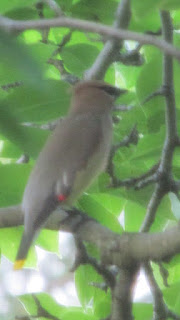 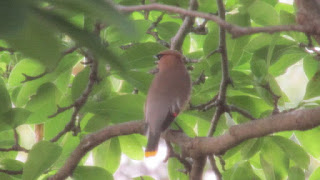 "One of the most beautiful of all birds" (Birding, ed. Lindsey, Fog City Press, 1994), the cedar waxwing. Bombycilla cedrorum.

Email ThisBlogThis!Share to TwitterShare to FacebookShare to Pinterest
Labels: life

Star: from Middle English sterre and old English steorra; Indo-European base ster, meaning star; from this, the Greek aster and Latin stella, a diminutive (ster-ela, star).

I don't know if there is anything more pleasurable than to sit out on a third floor patio on a balmy breezy dark May evening, and eavesdrop on the young people's modest get-together in a first floor patio's grassy yard below. One has all the vicarious enjoyment of a party: greeting new arrivals, gushing to the hostess about the food, going outside for a smoke -- if one is a man -- to get away, probably, for a moment from the female squealing. There was a lot of that, and some talk I couldn't quite make out, concerning which year everyone graduated, and who is having a hard time finding a job. Then a man arrived with stories to tell about having just got back from Paris. A woman exclaimed that she had been there recently too. She said how strange it was that Parisians had all this history around them, they had churches and statues from a thousand years ago simply as part of their lives. I longed to call over "did you see many Muslims?" but possibly it is true the tourist sites are guarded from that. Anyway it wasn't my party.

One has all this vicarious enjoyment, without the bother of actually having to go. No getting ready, no leaving things undone to get ready, no standing around listening to people whom one would rather not listen to -- and they the same when it comes to you, let's be fair -- no surreptitious glancing at watches to mentally note how long it will take to get home. And you can eavesdrop, one building over and three floors up, without seeming creepy. Far over their heads in the southeastern sky, Mars glowed. I only know this because a certain bright star had been equally as bright, equally as red, when it stood beside the rising full moon a week before. I had thought "that must be Mars" and had googled the matter then. It was. Mars has been in "opposition" lately, meaning that its orbit around the sun has aligned it with the Earth and made it easy to spot.

It so happened that on this night of the young people's party, the moon was gone, but Mars was still there. As the night grew darker, fainter stars in the same area emerged. One seemed yellow, and one, still fainter, for all its faintness seemed even redder than the planet.

Of course I had to google that too. I simply typed in "night sky" and learned that the yellow star is the planet Saturn, also in opposition now. The red star is a real star, Antares. It is "a red giant near the end of its life," which sounds alarming. It has been near the end of its life for a long time though; astronomers, I think, sometimes make a stunt of dealing professionally with vastness. Vast distances, vast epochs. The ancients knew Antares, of course they did what else was there to do but look at the sky at night and talk with Socrates all day, so it has been dying for millennia. They named it the anti-Mars, Ant-Ares, precisely because its vivid red color rivals the planet's. For the Persians it was "one of the four royal stars," for Egyptians "a symbol of the goddess Selkit." I quote one Elizabeth Howell from Space.com three years ago. She in turn quotes Richard Hinckley Allen's Star Names and Their Meanings (1899). Why not, in the life of Antares a 117-year-old reference is as current as any.

The star is 604 light years away. This means, if astronomers for all their stuntishness are correct, that the reddish light we see now burst out of that star in the year 1412, and has been traveling toward us at the speed of light ever since. And the people looking at it then, people like Henry V or the parents of the infant Joan of Arc, would have been seeing light that left the star in the year 808 -- not that they knew -- in Charlemagne's time. And so on, back to the ancients rather quickly.

Is it somehow mentally healthy and restful to look at Antares (and eavesdrop on other people), rather than surf stupid old Facebook or watch another movie -- or is it just kind of dotty? Occasionally red Antares seemed to flicker and twinkle as if with real energy, with movement. Astronomy books will tell you that this is the way you distinguish stars from planets. Stars really do "twinkle," because they are balls of fire, while the five planets appear as glowing discs because they only reflect our own sun's light. To look at this strange tiny object in the sky above your building and to know that it is massive, and has a color, and is doing its own thing unimaginably far away beyond all the planets, is, well, yes. I've decided it's mentally healthy and restful.

By the way. It turns out one of the young men is going to Greece on Saturday, to look for a wife.
at June 02, 2016 No comments: