Red and green wineglasses, circa 1887 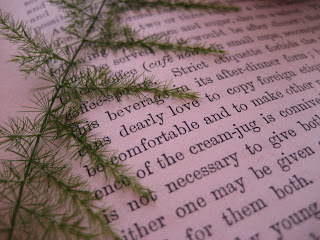 We drove to the antique mall in Crown Point, to look for a few new wine glasses (since we have found one or two pretty ones there before) and to look for old books about wine. I'd like to know what Americans thought and wrote about wine two or three generations ago, and I'd especially like to find wine books written before 1933, so that I may frankly cannibalize them for any possible art works or maps without fear of infringing copyright.

Crown Point's big red brick courthouse looms over the center of the town; I always think of my late aunt and uncle when I see it, for their elopement to Crown Point as teenagers, in 1937, was an ancient family scandal, and I suppose they must have formalized the deed inside that courthouse. (Apparently in 1937 a judge would marry two seventeen-year-olds from Chicago, because they wanted to.) As you drive south on Taft into town, you can see where the new strip malls and unnaturally wide streets are slowly encroaching on a slightly shabby core of tall Victorian homes set in small lawns, surrounding a main square of old, two-story crenelated brick office buildings. There is even a Carnegie library, now a cultural center, its cornerstone engraved -- if I remember correctly -- 1910.

The antique mall is a weird three-story monstrosity that has, over the years, been put to who knows how many uses. The entire second floor is the size of a basketball court, and was once used as such. The wooden floorboards of the third story still carry a coat of decorative paint for some reason -- flowers and curlicues making the pattern of a painted rug. Here and there in little nooks and crannies and under stairways are old kitchens, complete with sinks and cabinets, which must mean the place used to be an apartment building. There are air conditioning units shoved into odd windows, any gaps to the outside plugged by wads of newspapers of who knows what date.

And there are antique vendors, by the hundred in every nook and cranny, their wares for sale overflowing every old dry sink. We had no luck finding wine glasses -- could it be that the farmers of Indiana, who have become the unwitting source of all these dealers' livelihoods, had no wine glasses to bequeath? -- but I did find an old book.

It is called Social Customs, by Florence Howe Hall. The book was published in Boston in 1887, and someone must have received it for a present that very year, for it is inscribed in pencil on the flyleaf "Helen Louise Hutchins, Xmas 1887."

The book is charming, and entirely intelligent. It breathes of a day when leisured women sat down in their long skirts and wrote, with pen and inkwells and the vanished paper called foolscap, -- wrote, well, whatever they liked, and got it published. (Has the internet and its plethora of blogs partly recreated those conditions?) Our author gives us no less than thirty-three chapters running from "The early origins of manners, and their foundation on human reason" to "Etiquette of the ball-room" to "Gestures and carriage" to "Hints for young men -- Washington customs." Her education has been such that she can quote Shakespeare and Homer as needed, although she is modern enough to acknowledge Oscar Wilde, too. It takes intelligence to write:

... many persons think any dress is good enough to work in, no matter how old, shabby, and soiled it may be. This is a most unsound theory, and one which has more than a little to do with making people feel ashamed of work ... a person who thinks any clothes are good enough to work in does not appreciate the dignity of labor.

And it takes that touch of acidity, so delightful in an old-time author whose refined language makes her seem at first glance treacly-sweet, to notice:

Mrs. Hall -- and I am sure that is what she would have liked to be called -- writes only briefly of wine. Like Fannie Farmer, she expects her readers not to need too much detail about the subject. She notes the new fashion for "broad, low, flaring" champagne glasses, but says she prefers the flute. For serving "hock" she recommends a green glass, and for claret or Burgundy, a red glass -- both suggestions which would be anathema now, when clear plain glass is insisted upon so that the wine drinker can appreciate his wine's color. As for what wine goes with what part of the meal, again like Miss Farmer, she repeats what must have been simple standard knowledge. Sherry with soup, then chablis, hock, or Sauternes with fish, then claret and champagne with roast, finally Madeira and port after the game; then more sherry, claret, or Burgundy with dessert, and then liqueurs or cordials after everything else.

No mention of varietals, no talk of merlots or chardonnays or what "jammy hints" will go with what. Hock, by the way, was the old British word for German white wines, as claret was the British term for red Bordeaux. So, roughly speaking, Mrs. Hall is recommending white wines with fish (though a Sauternes would be a very sweet choice), reds or champagne with a roast, and reds with dessert, with the fortified Madeiras and ports dropped in somewhere between courses, near the end. While red wine with dessert may sound odd, I must say I have had a pinot noir -- in other words, Burgundy -- with apple pie and have found the combination very nice.

Mrs. Hall also tells us that the vogue for setting the table with a tablecloth, plates and glasses, and decorative flower arrangements is all owing to the Russians. "These people," she writes in wonder,control in large measure the diplomacy of Europe, invent wonderful and dreadful forms of modern liberalism, write our best contemporary novels, and last but not least, lay down the law which regulates the tables of every civilized land.

She calls this vogue diner a la Russe, and it seems she's right about it. It includes not just the set table, but the bringing in of the different parts of the meal, as portions, to each diner individually. Mrs. Hall expected your servants to "attend" your guests in this way at your dinner party; today our waitress does it at the local restaurant when she brings appetizers first, then soup, entree, and so on. As the modern vernacular puts it, who knew?

Mrs. Hall also mentions dining with Emerson. This is startling. How did she attain the privilege of dining with Ralph Waldo Emerson, one of the greatest literary lions of nineteenth century America? Her publishing house being in Boston provides one clue. A search of the internet -- little did she know she'd be googled someday -- adds another. Florence Howe Hall was prominent enough, and talented enough, to publish not one but several books, most of them on etiquette. But she also wrote The Story of "The Battle Hymn of the Republic," and there on its title page is her identity: daughter of Julia Ward Howe, poetess of the Hymn that Americans most recently pulled from storage for memorial services in the week after September 11.

History may not come full circle, but it does sometimes spiral around in striking ways. "If the reader finds as much pleasure," she says, "in reading these little details of ancient customs as the writer has enjoyed in collecting them, she will feel amply repaid for her labor."