Therein lies a tale. Your friend, or beau as your other friend calls him, bought you two lilac bushes as a springtime birthday present two years ago. He knew you loved them. You had the best of intentions to plant them in your old backyard, let them grow a year or two, and then dig them up and transplant them to whatever place, house, condo, apartment, turned out to be home, actually. You did plant them, and you planted protecting and obvious metal garden stakes at the site of each, and explained to the right people that these were to remind everyone not to mow them down. They bloomed the day you moved.

Alas, they got mowed down. They got stomped down, by the landlord who did not know the story, and who for the first time in twenty years chose that summer to fix up the side of the garage where the garden lay. Maybe all that time he had been kindly avoiding stomping the garden.

Unhappy at their loss and feeling remiss at the way I -- I mean, you -- treated the beau's presents, I waited my chance to make it up somehow. Two years, another abrupt move and some job changes intervened. Now at last I have it: a freshly purchased lilac bush, just about the right size to be two years old, placed neatly in a bright blue pot and ready to act the part of one of the very ones he chose. If pressed I am ready to say the other one didn't make it. Will he remember he did not choose "dwarf Korean," however? One trusts not. 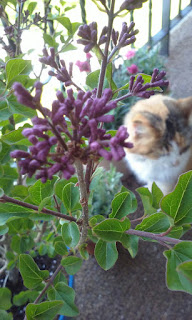 Lilac in the foreground. The lavender lies at the cat's feet and the "pinks" behind her. It's a very small garden. Lilac: from the French lilas, via Arabic lilak and Persian lilak or nilak, meaning bluish; further, from nil, indigo, and Sanskrit nila, dark blue, indigo. The plant is a member of the olive family, Olea, imagine that! I almost bought a sweet olive, Osmanthus fragrans, from a grower out east, until I realized that $25 for a plant in a three-inch pot was in itself a recipe for horticultural disappointment.


What you also wanted were tulips to go in the real, outdoor garden your neighbor began planting, even without the condo association's permission twenty years ago -- remember? -- and so you slung a few closeout-priced bulbs in the ground last fall and here they are. Some are small and orange. Some are pink, and bigger. Tulip: from the Fr. tulipe, via Turkish tulbend, turban. 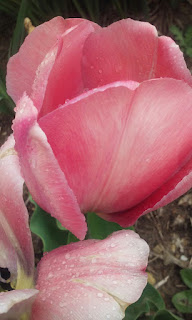 She also has bluebells, more of a forest plant, but welcome. 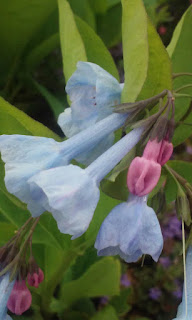 Another English word I have learned lately is sedevacantism, but therein lies an entirely different tale. It is from the Latin, and means "vacant chair." You would almost have to enjoy theology.