A cabernet from third grade

There are definite advantages to working with a -- well, I won't say wine geek, because that does anyone a disservice. There are advantages to working with a colleague who has thirty-plus years of experience and interest in the wine trade. Last week, I got to taste a California cabernet sauvignon made in the year I was in third grade. This works out perfectly, since my blog friend Ann recently challenged her readers to post a grade school picture. 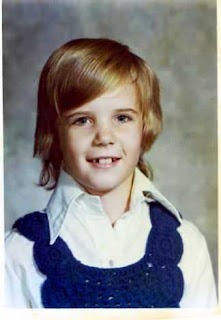 The wine was a vintage 1973 -- year of crocheted vests and home hair cuts, as you see -- Larkmead, a label that has since morphed, through one acquisition and another, into Frank Family Vineyards. The price, circa 1976 and before bar codes, was a whopping $9.99, which in fact probably was pretty whopping back then. A Frank Family cabernet sells now for about $40. To make the wine still more interesting, my colleague told me that he had opened it sometime in the 1980s and then resealed it with a vacuum pump. It so happened that when he re-opened it a week ago, it had aged a bit past its best, but was not vinegar. So vacuum seals work quite well.

The wine had a pale red ochre color and smelled vividly like port -- brine, raisins, and earth all mixed up together. Its taste was port or sherry-like, too, and it flowed down the throat completely without tannin and almost completely without acids. This is an odd experience when you are accustomed not only to chewing the fruit but also to fighting down the chalky puckerings and needle-pricks caused by the tannins and acids in so many red wines, especially those drunk too warm.

This 1973 Larkmead cabernet had done what young, aggressive cabernets are supposed to do with all their powerful ingredients; it had done what the "noble" grapes are nobly capable of doing. It had aged in the bottle, and all its harshness had ripened into something mellow and new.

I must admit I'm not sure what I would have paired with this at the dinner table. Its fruit taste was just about gone -- no "cassis" here -- and it was so very like sherry that I asked my colleague, if this is the point of an aged cabernet, why not just drink sherry? I suppose there is no answer to that except that the Larkmead would have been perfectly right a few years ago, and anyway -- who wants to drink only sherry?

This bottle was not Esteemed Colleague's only cellar experiment. He also had a half-bottle of a California pinot noir which he had opened in May of 1982 and then resealed and placed in the deep freeze (let's see -- I was a junior in high school). Having just emerged from its own private Arctic after twenty-six years, it too had a pale ochre color, little fruitiness, and an aroma like sherry, although a far fainter one than the cabernet's. It, too, had no harshness going down, even if the acids that distinguish a pinot noir were still there to make the mouth water afterward. How can the miraculous transformations that make a wine age in the bottle, how can the changes that cause wine geeks to rhapsodize about the product being "alive," still take place when the stuff is frozen solid? Apparently, they just can.

I'm not sure what I would serve with this pinot, either. Esteemed Colleague judged it the same as the cabernet: past its best, but at any rate, not vinegar. Best served with notebook and pen, perhaps. 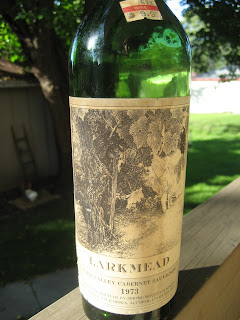