Another of the most-viewed posts from At First Glass, certainly among the top ten. Over 4,700 views. Apparently people google "boules de picolat" a lot.

These boules de picolat, or Roussillon-style meatballs, come from one of the most splendid cookbooks one could hope to find, Clifford Wright's A Mediterranean Feast (William Morrow, 2001). History, recipes, personal anecdote, historical anecdote, maps, illustrations from medieval and Renaissance art -- who could ask for more absorbing reading?

Only his politics do interfere with the fun. Scarcely a page passes without his crediting the invading Muslim Arabs, circa 650 A.D. and beyond, with being the fount of all joy, peace, health, culture, wisdom, and of course good food in the entire Mediterranean region. (If so, why was everybody also starving -- the major theme of the history?) And why should a cookbook author scold his readers not to criticize the wearing of the Muslim veil (see p. 207)? Mr. Wright's having been a staff fellow at the Institute of Arab Studies, and then the executive director of the "American Middle East Peace Research Institute," may explain a little something about his decidedly unculinary idee fixe.

A further truth be told, I have never made great practical use of the recipes in the book. They tend to include long ingredient lists and sometimes bizarre or very gourmet supplies. "A Grand Moroccan Pigeon Pie" (p. 296) will require the use of orange flower water and saffron as well as the pigeons and everything else.

Still. These meatballs in the style of Roussillon, a town in southern France, are good. I am always enthused by any recipe which combines garlic and cinnamon. And olives. 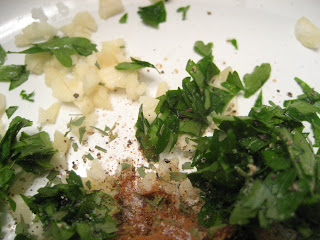 We begin with seasonings dropped in a spacious bowl: 4 diced garlic cloves, 2 and 1/2 Tablespoons of chopped parsley leaves, 1 Tablespoon of chopped fresh basil or tarragon, and some ground cinnamon "to taste" -- begin with 1/4 teaspoon, I would suggest.

Then mix in 2 pounds of ground meat, either beef, veal, sausage, pork, or a combination of any and all. Mix in an egg and salt and pepper. Knead all this together and make small meatballs of it. And yes! Wetting your hands with cold water as you make the meatballs does prevent them from sticking to you. 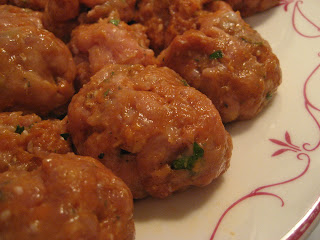 Next, dredge the meatballs in flour -- gluten-free, in our case. This is tedious and I almost never flour meatballs, but I must admit it enhanced both flavor and appearance for browning.

Brown the meatballs in batches in olive oil until they are golden. Set them aside, and then heat 1 pound of fresh or canned tomatoes, 1 large diced shallot, and a pinch of cayenne pepper in the drippings. Cook until the tomatoes reduce to a sauce, about 15 minutes. Then, return the meatballs to this sauce. 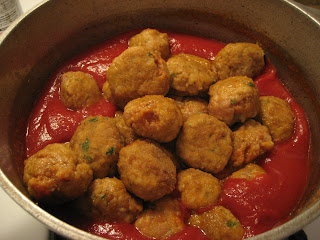 Now add 1 cup of green olives and 1/4 cup chopped fresh ham, if you wish, to the meatballs and sauce. Pour in 1 cup of beef or chicken broth, bring to a boil, and simmer until the meatballs are completely cooked, 20 minutes or more. In fact this can simmer quietly away for as long as it takes you to make some rice, or perhaps fried potatoes? -- and toss a salad or prepare a vegetable. 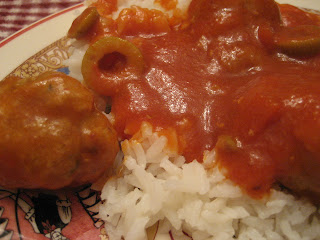 And pour the wine. Would a hearty and simple southern French Rhone do, red or white? Or even a good dry Vouvray from the Loire Valley, a wine I have been enjoying with a number of rather strong, spicy meals lately?

And what's for dessert? Here, Mr. Wright can't help us much. His is a most unusual cookbook, divided into chapters with sumptuous historical themes -- "Islands of Paradise and Isolation," "Harvest of Sorrow, Food of Dreams" -- but into nothing so prosaic as Desserts or Candies and Confections. For all his dwelling on the fact of long-term Mediterranean starvation, his recipes are heavy on meat, the food of the rich. Anyway, perhaps a nice French apple tart would do, or a little bit of chocolate. A date nut bar ... a sip of cognac ... we are staring vacantly into space, aren't we.
at January 26, 2014