One would think the combination of white bread, cheddar cheese, and canned mushrooms would be positively ghastly -- that to a refined mind it would shriek "bourgeois 1950s glop" right there on the plate. It does holler 1950s, but having tried it and gussied it up just a little, I can promise that it is delicious.

The recipe comes from a small pamphlet called Cooling Dishes for Hot Weather, published by the staff of the Culinary Arts Institute in Chicago in 1956. Last summer we found the pamphlet at our favorite antique mall in downtown Crown Point, Indiana, just across the street from the landmark courthouse where so many young couples, including an aunt and uncle of mine, used to elope. People could get married there without so much as a by-your-leave -- literally -- pretty much 24/7, as we say now. My aunt was eighteen, my uncle seventeen. It was 1937. Then they had to toddle back to Chicago and tell their parents. The earth shook.

Anyway, the casserole. You start simply by buttering a one-and-a-half quart casserole dish, and then cutting six slices of white bread in three pieces each. Layer a few of the "fingers" of bread in the bottom of the dish. 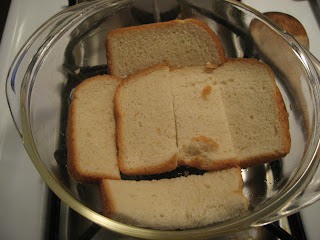 Next, you will layer in half your quantities each of mushrooms and cheddar cheese. The recipe calls for only one 4-ounce can of mushrooms, about half a cup, and half a pound of cheese in all. I opted for fresh oyster and fresh baby bella mushrooms instead, and more of them. I sauteed about two cups of them, total, in olive oil until they released some of their juices. 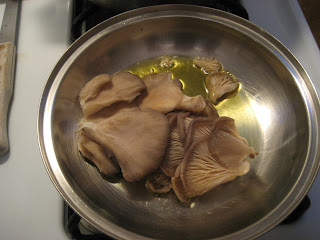 The casserole, half assembled, looks like this (I also used a variety of store-bought grated cheese): 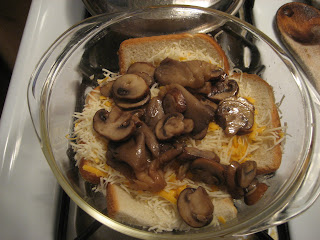 To finish, add another layer of bread fingers and the rest of your mushrooms and cheeses. Top with the remaining bread, and then dot this with 2 Tablespoons of butter, in several pieces. Remember this is the 1950s. No one is worried about cholesterol. Have some red wine, and whistle while you work. Sinatra, or Nat King Cole, preferably.

Next, you will pour over all a custard that you have made from 2 beaten eggs, the mushroom juices plus enough milk to make 1 cup of liquid, and a few sprinkles of salt, pepper, and paprika -- a half teaspoon of the salt and paprika, and an eighth teaspoon of pepper, to be precise. 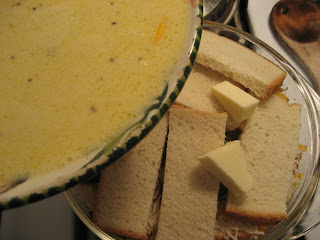 Bake the casserole in a preheated 325 degree oven for 30 to 40 minutes, or until it is "puffed and lightly browned." It doesn't exactly puff, but the bread on top toasts prettily. Like so: 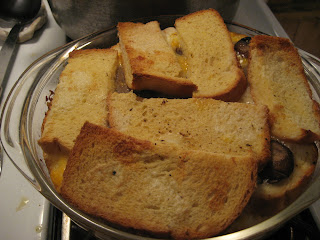 And then scoop it out and eat it, like so: 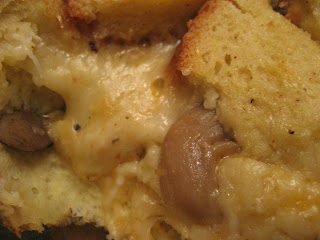 And what wine to serve with this? I think a nice, thick "fruit bomb" red would do, perhaps the same red you've been sipping, while you cook, in deference to your arteries. The kind of jammy, California style red which wine writers fear is taking over the whole world of red wine, like those space pods that conquer humanity in 1950s science fiction movies. Once you pour and then sit down to the table, a salad and maybe a soup, if you are ambitious, will probably be all you'll need to round out the meal.

I'm curious about the ladies who ran the staff kitchens at the Culinary Institute, ladies with charming names like Melanie de Proft, Hazel Beman, and Mitzi Okamoto. Whatever happened to them? Are they well known among true food aficionados? I wonder who in the world has ever also possessed a copy of Cooling Dishes for Hot Weather, and made from it things like Cheese-Mushroom Casserole, or Orange Marlow Refrigerator Pie. What's really delightful is that on our last visit to the antique mall across the street from that important courthouse, we found three more pamphlets from the Institute. All have the same look -- simple drawings of happy people in formal clothes, cooking and eating -- and all were prepared under the watchful professional eye of Miss de Proft, circa that banner year of 1956. I look forward to exploring The Southern and Southwestern Cookbook, Sunday Night Suppers, and especially Entertaining Six or Eight. (Six or eight? We'll see ....)
at January 26, 2014