Years ago the Chicago Tribune used to run a column called "Cook It Light" in its food guide section. Readers would send in recipes from the pre-cholesterol era, and would ask the Tribune's test kitchen staff to amend them and make them healthier. Calories and problems -- butter, cream, eggs, salt -- all went out the window, and the resultant triumph was printed below the old, artery-clogging horror.

In my youthful confidence I used to clip and save the original recipe, reasoning that the butter, eggs, cream, and salt probably gave the authentic dishes their flavor. Indeed, readers submitting their requests often sighed "My family loves this, but -- ". 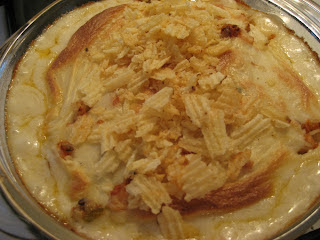 One such concoction that I have saved and used over the years is "Salmon Delight," which combined, among other goodies, canned salmon, canned cream of mushroom soup, potato chips, and sliced almonds.

Originally, the recipe instructs that we drain the salmon, save its liquid, and mix it with a little milk, which is used to dilute the cream of mushroom soup. Then the salmon is combined with a cup of cooked rice and a few tablespoons of onion and green pepper sauteed in butter. Then we line a buttered one-and-a-half quart casserole with crushed potato chips, and the salmon-rice-peppers mixture is layered in with the soup alternately. More crushed potato chips -- almost 2 cups in all -- and the sliced almonds are sprinkled on top, and it all goes into the oven at 350 degrees to heat through for 45 minutes. 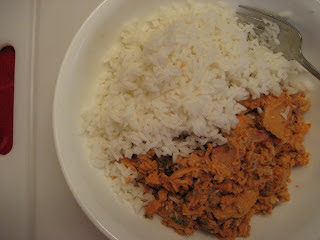 I still start out, of course, with a mix of canned salmon and a good cup or more of cooked rice. Easy enough. No need to save the salmon liquid, as I won't need it. I saute, not just a few tablespoons, but a whole onion and a whole green pepper in a little butter. 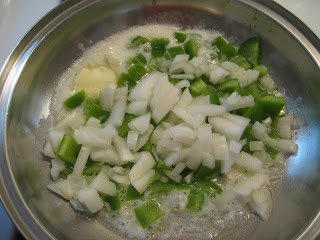 Replacing the soup with my own cream sauce is easy and healthier. I make a roux of equal parts of butter and flour (4 tablespoons each), 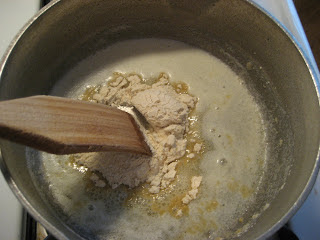 -- and since we are a family with a gluten allergy that's all-purpose gluten-free baking flour (it does the job) -- and then add 2 cups of milk and stir to make first a paste, and then gradually a sauce. 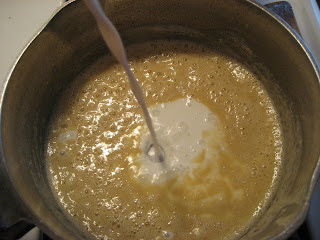 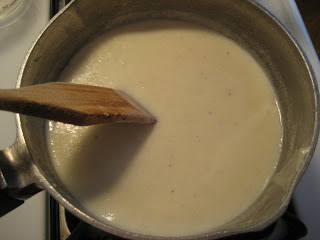 Then, it's a simple matter to layer the salmon-rice mix -- not forgetting to add the cooked onions and green pepper to this -- into the casserole alternately with the sauce. 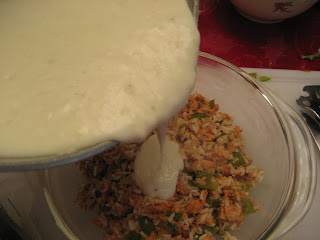 I lined the baking dish with crushed potato chips once and never did it again. They become strangely soggy and tough. Oven ready, Salmon Delight looks like this: 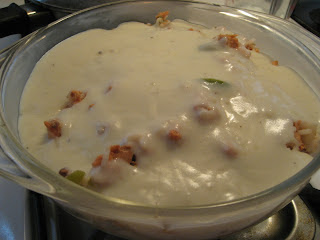 About 35 minutes at 350 is enough to give it a nice brown top. One handful of crushed potato chips, perhaps one-third of a cup in all, can be sprinkled on top after baking, as in the first photo, to give it a little crunch. I have never bothered with the almonds. 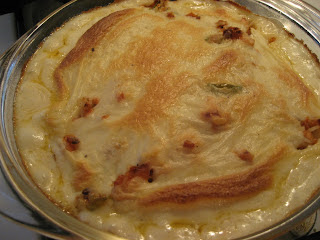 If you are married to a meat-and-potatoes guy, or a meat-and-potatoes woman for that matter, this dish may be too gloppy and pudding-like to count as "dinner." Save it, perhaps, for a night when Mom's working late, and it's just you and the kids. And yes, that's real butter and whole milk I'm using. I console myself with the fancy that at least this is more wholesome than the original recipe -- well it is -- and besides, there are vegetables in it!

Incidentally, I made fresh broccoli to accompany it, and the wine I poured was a Stone Cellars pinot grigio "by Beringer." Less than $5 at the grocery store, it was light, gentle, and freshly melon-like, a very nice accompaniment. I think a chardonnay would have been to heavy, as would most reds except perhaps for a Valpolicella or a Chianti, something clear and juicy that the Italians seem to do so well.

And anyway -- the furies are still nagging me -- don't wine and broccoli have all those flavinoids, which just whoosh the cholesterol right out of you? Many thanks to the Tribune, too -- which has unaccountably given up on its "cooking light" section long since.
at January 29, 2014