The wine in Rear Window

Rear Window is among my favorite Alfred Hitchcock movies, even though the breathtaking Grace Kelly does not prove herself here the best actress in the world, and James Stewart at times seems to phone in his performance, too. But listen carefully -- there's a wine mentioned and poured in an early scene.


It comes when we first meet Kelly's character ("reading from top to bottom, Lisa -- Carol --Fremont"), in her fabulous white and black Edith Head frock, with her carry-out dinner from Twenty-One waiting at L.B. Jeffries' apartment door. Along with the lobsters, there is wine in an ice bucket. Champagne, we assume. No, nothing so obvious. "It's a Montrachet," she says with soft excitement, and that is all. If you happened to be munching some popcorn just then, you would have missed it.


I simply love it when a scriptwriter of yesteryear matches elegant taste to elegant and sophisticated characters, and assumes that the audience gets it. A Montrachet is the most perfect and sublime of French white Burgundies, coming from an 18-and-a-half-acre vineyard which has given its name to the two nearby villages, Puligny-Montrachet and Chassagne-Montrachet, and to at least two adjoining vineyard plots, Chevalier-Montrachet and Batard-Montrachet. The vineyard Montrachet is an appellation in itself, legally identifying, on any wine bearing its name on the label, that the grapes have come from these 18 acres and satisfy the superb and strict conditions of wine-making there. As this is Burgundy, the grape is chardonnay.


"Given the incredibly meagre amount of Montrachet made -- 30,000 bottles in a good year -- and the extreme unlikelihood that most wine writers have ever possessed a bottle, or drunk it in its mature state more than once in a blue moon, there have been more adjectives expended on this than on any other wine in the world. Those who love white Burgundy dream of Montrachet and, OK, I do too." 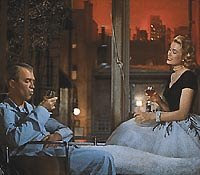 Look for it at your local wine shop, and be prepared to shell out some dough for it. I think I have seen it for $35 a bottle to start, which seems oddly reasonable for such sublimity. And be prepared to age it. " 'It needs ten years to sort itself out,' ' a friend of Clarke's tells him in the same book. " 'Don't worry.' "
at January 27, 2014