I spent a virtuous week last week, not only trying a new recipe I had always planned to try, but making great use of leftovers. I made a boeuf bouilli for the first time -- this is a simple "boiled beef," much like pot roast except you pile meat and vegetables into a pot, cover them with water, and cook, not browning the meat first. Years ago, I owned a James Beard cookbook in which the recipe appeared, and of it, Beard commented that "many a man with a sophisticated palate would choose simple bouef bouilli as his favorite meal." The remains of it, not things like the potatoes and turnips but the broth and beef, went into a spaghetti sauce the next day.

Then, a chicken fricasee -- chicken with lemon cream sauce -- left me with too much lemon sauce on my hands. Much too much. It served to spruce up a few lunchtime helpings of leftover rice, and then it did duty as the cream sauce you really must have over those nice fried salmon cakes that make such a quick, easy dinner after work.

And then along with the salmon cakes and the lemon cream sauce, I was lucky enough to enjoy an "aha!" wine and food pairing moment. A friend of mine put this well. Of course we'd like to match food and wine agreeably, and some pairings are classic. But often we don't know what we're doing, and it's so subjective that it seems taking other people's advice doesn't make any sense for a start. Often we buy a "big," tannic, over-oaked California "fruit bomb" which, all the experts with long memories and long faces will tell us, doesn't really complement anything. My friend said she never really "got it" until once, in a restaurant on a business trip, she happened to order some sort of regional specialty, fish, with a local wine. It wasn't mysterious, it just tasted fine together, instantly. As she said afterward, "I got it."

What I happened to pair with my salmon cakes and lemon cream sauce was simply the last mouthfuls swishing around in the bottom of a bottle of grocery store red ($9.99) called, appropriately, Red. It has big splashes of red on the black label. My daughter who likes CSI says those are ninety degree splashes, like blood dropping straight down. It's made by St. Francis Winery in Sonoma County, California, and is a blend of merlot, cabernet sauvignon, cabernet franc, and zinfandel. The cabernet franc grape is hard to find in grocery store or liquor store inventories, so I was glad to come across this wine and get a chance to at least taste something of its style.

Cabernet franc is a traditional blending grape for red Bordeaux, and also is vinified alone in France's Loire valley, where it makes fruity, acidic reds called Chinon, Bourgeuil, and St.-Nicolas-de-Bourgeuil. I have had my eye peeled for cabernet franc ever since reading Willie Gluckstern rave about it in The Wine Avenger. (When it comes to food-friendly wines, he said, you want acidity, the stuff that makes your mouth water for more food. For a white you want acidic riesling, not "clunky" chardonnay, and for a red you want acidic cabernet franc, not clunky old merlot. He did kind of go on and on.) Although cab franc was listed only as the third of the four grapes in this blend, I think it made itself known, and it made the aha! pairing. That rich berry-ness and yes, acidity, were just right with the richness (and acidity) of salmon, cream, and a bit of lemon. It tasted fine, instantly. I got it.

It so happens that while I was being virtuous with leftovers and having aha! wine and food pairing moments, I also poked my nose into foodbuzz, the social networking site for food and wine bloggers (or anybody). Among all the gadzillions of blogs you can surf there, you can find How To Cook Gourmet, by Chef Kathy. She tells us, on her food and wine pairings page, that "wine should be matched with the dominant flavor of the dish, which in many cases will be the sauce." Well, my goodness. Yes, I see it now. Another aha moment. Or, perhaps (murmur savoringly) ... ah-so. 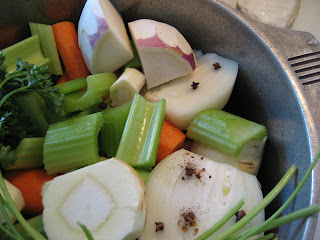