Elisabeth Luard, in The Old World Kitchen: The Rich Tradition of European Peasant Cooking, writes that ordinary families in Switzerland could, at least at the time of writing (1987), reasonably expect a knock on their door and a visit from a government official checking up at any moment on the meal they were eating that night. Swiss officialdom worried that the serving forth of traditional foods might fall into desuetude through a combination of immigration and emigration and, well -- desuetude. "Eat Swiss!" was the nation's command.

A typical Swiss recipe that officialdom would have been pleased to see on the table was Rosti, a grated potato cake. Elisabeth Luard's recipe calls for three pounds of grated potatoes to be fried in half a cup of butter, the potatoes turned over and over with a fork during the first twenty minutes of cooking and then allowed to crisp. I attempted this because I love hash browns or indeed any recipe that gives potatoes a browning. (Mashed? Meh.) The results were, as I penned beside my notes, "Glop."

Perhaps I would have done better if I were Swiss and had witnessed my mother prepare them in childhood. In Lucerne. But I think the trouble with this recipe is that it did not call for nearly enough fat. The trouble with potatoes is that they release so much water while frying that you positively must use buckets of hot oil to fend off or contain or sizzle away all that water content -- all that potential glop. What you want to do to make rosti, in fact, is to make latkes. With latkes, the point of the dish is the oil. Smart.

To make latkes, dump some cooking oil into a heavy frying pan. How much? Who cares? A lot. Don't use olive oil, as it starts to burn at too low a temperature and anyway it's too expensive for this peasant meal. Grate your potatoes into a bowl, sprinkle in some salt. Heat the oil. This does not take long, perhaps three or four minutes. (Don't leave the kitchen.) Pick the grated potatoes up in small forkfuls and place them carefully in the hot oil -- you can test its temperature by dropping in a few strings of potato first, as you see at lower right of the photo above. If they sizzle brightly right away, the oil is ready.

And fry away. You will only want to fry three or four latkes at a time. When they look golden and scrumptious, they are done. A few minutes per side is about right. The potatoes in the bowl will turn brown quickly and give off a lot of water, but they whiten up in frying, although the first batch is always the lightest and prettiest. Drain the latkes on paper towels or brown paper, and serve them, of course, with sour cream, applesauce, or both. 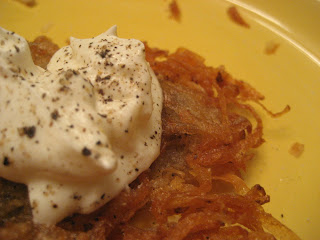 There are fancier recipes for latkes, calling for eggs, flour, and even the reserved starch from the oozing potatoes themselves -- saving that is a heroic job -- but over the years I have learned to do it the easy way. And don't trouble to peel them first. You shouldn't strain yourself.

I do believe that the best accompaniment for these is probably plain hot tea rather than wine. They are so very homely and crispy and comforting. Wine seems on another level entirely. And if you follow them up with (perhaps Swiss) chocolate, you can go on "eating Swiss," too. 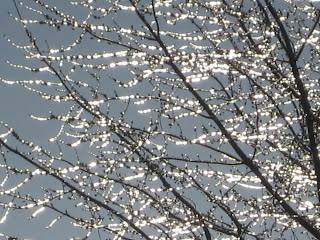