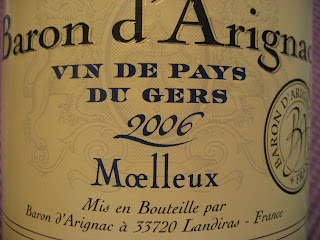 A pretty bottle, a good price, and a chance to taste both what French law considers "moelleux" -- sweet -- and what it classifies as "vin de pays" or country wine, an everyday drink of somewhat lesser quality than that usually exported. I'm there.

The wine was Baron d'Arignac Vin de Pays du Gers, Moelleux, 2006; from Landiras ($7.99). It glugged rather syrup-like into the glass, and appeared almost colorless there, although it was lovely clear pale gold in the clear, engraved bottle. Its aroma was sweet and reminiscent of riesling, its taste,and I quote my notes made on the spot, -- medium body, mouthwatering, floury, noodle-like, faintly nutty. (Noodle-like? That's what I thought.) It had an unexpectedly hard, dry finish. And it was perfectly delicious.

The official legal category of vin de pays (pronounced vahn-de-payee), country wine, was first recognized and added to the "pyramid of categories used to define wine quality in France" in 1979 (Jim Budd, pp. 248-249 in The Encyclopedic Atlas of Wine, Global Book Publishing, 2004). It is a step above basic "vin de table," table wine, and a step below the fine wines that are identified by their "appellation d'origine controlée" (AOC or AC), literally meaning their place of controlled origin. These last are the imports we usually see on our wine shop shelves -- Appellation Bordeaux Controlée, for example. The higher up one goes in the pyramid of wine quality, the more restrictions French law places on the winemaker's product, from grapes to cultivation methods to blends used to the information provided on the label. This is a good system in that it guarantees a Bordeaux, say, will be what we think we are paying for, but not so good in that it stifles innovations among "dynamic, quality-conscious winemakers" (Joanna Simon, p. 161, The Encyclopedic Atlas).

The vin de pays category was introduced, Joanna Simon goes on to explain, "principally to encourage producers of vins de table to raise their standards, especially in the vast Languedoc-Roussillon area in the south, and overall it has worked extremely well." In other words, it seems French makers of table wine -- the equivalent of Ripple, perhaps -- were told, since you'll never reach the exquisite straitjacket of AOC status, you may have the freedom to experiment a bit with grapes and vinifying and labelling, in return for which the law will boost you up to a newer, classier marketing category: vin de pays, country wine. And as for the system working extremely well in the south, well, yes, that would account for my $7.99 bottle of Vin de Pays du Gers at my local liquor store. There on a map is the département of Gers, bang in the middle of the larger Cotes de Gascogne region. Quite west of vast Languedoc-Roussillon, but still the south of France.

What is frustrating is that just when we think we have herewith puzzled out the rudiments of French wine making categories, they up and change them. According to a recent article from Vinography, the three basic classifications of wine, table wine, country wine, and higher quality wine, will now go thusly: table wine will be called "Vignobles de France," or vineyards of France. Country wine, our vin de pays in the pretty bottle, will be described as of "Indication Geographique Protégée," literally of protected geographic area. And AOC wines will now be called of Appellation d'Origine Protégée or AOP, wines of protected origin.

The laws for winemakers appear not to have changed too much in any category. What seems to be most new for the French is the new permission for lower-tier and middle-tier product to be labelled with the name of the grape. The French, historically, frown on this, again according to the authors contributing to the Encyclopedic Atlas. All those bottles shouting chardonnay and cabernet, "vins de cépages" as the French call them, confuse the issue. "Wine is much more than mere grapes -- it is terroir" (soil, place of origin, p. 161).

For that matter, what is the grape of my vin de pays du Gers, moelleux, from Landiras? According to the website Caves et Vignobles du Gers, it is likely a combination of the colombard, the gros-manseng, and the ugni blanc, which is the same grape the Italians call trebbiano -- itself "the most prolific vine in the world, yielding more gallons of neutral, bland wine than any other grape" (Karen MacNeil, The Wine Bible). Oh dear. One is so anxious for one's taste not to be bland and neutral. I look up the others: colombard, also called French colombard. "Widely planted grape for California jug wines." Oh dear, again. And gros-manseng? It doesn't rate a mention in The Wine Bible. Apparently, it produces sweet and simple bourgeois wines in the south of France, very prettily bottled, it seems. Vin de pays, in fact, country wines or IGPs, which in turn account for half of all the wine bought in the whole country.

As Miles sighs when he is offered a much more fabulous and noble New World selection in Sideways: Well, okay. And by the way, my new Moelleux washed down a chicken fricassee very pleasantly.
at January 26, 2014