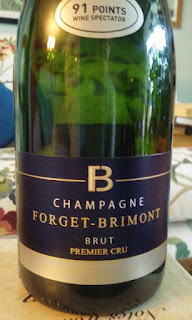 Doesn't this say it all? I mean the silver sticker on a bottle of a little-known (surely) champagne, Forget-Brimont, boasting 91 points from Wine Spectator.

Of course I liked the wine. So biscuity, so almost almond-like, so light and bubbly and yet with a solid little buttery core of body or mouthfeel, too. Of course it was delicious. I should hope any normal person would like good champagne -- and be appalled, like me, at people who don't. I say this, remembering the poor soul who came to buy "champagne" over the holidays "just for a toast, because nobody drinks it." Many people do buy sparkling wine just for a toast but no one else has ever clarified the matter to me to that extent. Why not, then, sir, "toast" with water? Toast: "[n. from the use of toasted spiced bread to flavor the wine, and the notion that the person honored also added flavor] 1. a person, thing, idea, etc., in honor of which a person or persons raise their glasses and drink; toast from the Middle English tosten < Old French toster, < Vulgar Latin tostare, < Latin tostus, < torrere, to parch, roast, see THIRST."

To be fair I'm no one to talk. I mean as far as blissful ignorance is concerned. I have been in the liquor industry for almost ten years, and yet up until two nights ago was not aware, off the top of my head, that the town of Calistoga is in Napa County. I may plead mea culpa, or I may riposte that here you see it is possible to be in the industry for ten years, and be competent, and yet not have any reason to know that the town of Calistoga is in Napa. What then must I know? "Where is the moscato? It's for my mom ... I don't know anything about wine."

Me neither, much. I had to fumfer around and act humble and charming (I hope), in my ignorance, for the young couple who didn't know Calistoga either, but who bought two thousand dollars' worth of fine wine in ten minutes anyway. They went for big points, big names, and big expense. Bless their hearts they ended up choosing the Napa Valley monster cabernets that tick all three of those big boxes. If only I had had my cheater eyeglasses with me, I could have spotted the name Napa clearly placed on a label of Diamond Creek Volcanic Hill Calistoga cabernet. The wine got 100 points from Robert Parker. Incidentally I still say that gentleman has thrown out perfect ratings abundantly and meaninglessly since he retired from tasting Bordeaux in 2015.

We all, the nice young couple and I, kept squinting at the fine print of his review, on a paper "shelf talker" clipped to the shelf, to confirm we saw the word Napa. But at his level Parker is far beyond signaling something so basic given a fifty-word space. It was all cassis and graphite and sexiness. I was almost sure this must be a Napa wine, how could it not be? Only the nice young man with a young man's eyesight said the label didn't say. I thought, well it is very likely I am wrong. Until I can retrieve my glasses, I must fumfer. It might be Sonoma, it might be Paso Robles, it might be Santa Clara, Santa Rita, Santa Lucia, it might be mountains or counties or highlands or benches, or who knows how many other nomenclatures or subregions extant within the large state of California. A day or two later I had occasion to tell another customer so simple a thing as that Paso Robles is south of San Francisco. This was a fact I absolutely knew. But then I looked at a map and double checked distance, since I had a funny feeling. It turns out that Paso Robles is south of San Francisco in the same way the Mississippi River is west of Chicago. Way west -- way south.

All in all it is peculiarly satisfying to have just finished reading Kermit Lynch's Adventures on the Wine Route (1988). Here, Kermit does France. And Kermit complains, thirty years ago already, of the big-point, big-expense uniformity, plus the legal tinkering with appellation boundaries, that makes knowing wine place-names -- even in France -- more and more an academic exercise. Cote Rotie (the northern Rhone) -- or Bordeaux or so by extension even Calistoga -- what matter? The consumer wants lush, fruit-pie wines, and if, say, wines called Beaujolais (a part of Burgundy) used to be light and fizzy enough to wash down Lyons' robust tripe-and-garlic cuisine and now no longer can, well then. It is done. Already thirty years ago Beaujolais had grown "fleshy," "supple," words Kermit considers profanities. He called what consumer taste and winemaker sellouts had done to this region, rather extravagantly, "genocide." "I cannot begin to communicate how profoundly the critics' embrace of such freak wines depresses me," because the critics' embrace persuades new wine drinkers that each new bosomy style is traditional. And so that's where they spend. Ah, the critics and the points, even then. We remember also Michael Broadbent's tired dismissal of the "global red" (Vintage Wine, 2003). And yet everyone is also trying to sniff out complexity, now! Like it's there.


So that's half the theme of the Adventures: uniformity smothering terroir. The other half is that a handful of producers were or are still doing it right, and Kermit will find them. Full circle: Kermit Lynch's name on a back label now is an indication of a palate and a badge of this-isn't-"supple"-it's-what-it-used-to-be-warning:-probably-surprisingly-thin approval, just as much as are Robert Parker's breathless "100s" on reviews clipped to the shelf beside Calistoga monsters. Broadbent has his own selections, too.

So back to the champagne at the top of the page. We could fumfer, and ask whether it's Ay or Epernay, and what was the precise dosage. But the silver sticker is the first thing we see. Do you think someday archaeologists will dig this bottle out of the ground and wonder what the sticker meant? We know the ancient Romans liked "Falernian" but we don't know what it was. We know the still more ancient Egyptians were serious connoisseurs, but can't imagine what swill must have come out of that desert furnace climate (see Hugh Johnson's Vintage). Would someone looking at this bottle understand, oh yes, they must have had a 100-point rating system for their wines, the points allotted by respected authorities in the trade who published their scores in famed magazines. Naturally a vintner whose product received such a "score" would want to boast about it, and so the business practice developed of affixing proof of the score to the actual bottle. It helped drive sales. Curious ... the archaeologist of A.D. 4017 will cock his head to one side, as he thinks alone in a windy field. The public themselves must have had little knowledge ....

This is why I declare that the people and the psychologies in wine are far more interesting than wine itself. Though generally it tastes very good of course.
at April 11, 2017 No comments: