So I have just started my subscription to Horticulture magazine, and spent a relaxing evening this week going through it from cover to cover. (I promised you the occasional houseplant or cocktail theme, remember, while we dip our toe into the ocean of Gregorian chant.) In a short article called "Air Plants Aloft" by Frank Hyman, September-October issue, I find he makes use of "the dregs of leftover beverages" like coffee or sodas, mixed one part beverage to twenty parts water, as a substitute for expensive commercial air-plant (Tillandsia) fertilizer. But he pours it into other houseplants as well.

I like this. In an old houseplant care book from the '70s I once came across the suggestion to use the rinsing-out water from milk jugs as a fertilizer for a particular purpose, I forget what, and then not long ago in a wine book -- I forget which -- was it Kermit Lynch's Adventures on the Wine Trail? -- I think maybe -- the writer admired the chic French lady winemaker who made beautiful wine and poured the tired dregs into her outdoor rosemary plants and potted lemon trees, of course this was in Provence or someplace romantic and hot, and they were beautiful and healthy too. As to Mr. Hyman's specific twenty-parts-water-to-one-part-beverage-dregs rule (mind you the French lady used pure wine), that is interesting because in his Vintage: the Story of Wine Hugh Johnson retells the Odyssey's tale of strong Thracian wine being normally diluted with twenty parts water. Odysseus gives it full strength to the Cyclops: the Cyclops passes out and Odysseus gouges out his eye and escapes.

But I am asking whether I ought to try the twenty parts water rule with my leftover wine, for my houseplants. They need nutrients, no? Why should a meek teaspoon per gallon, of some blue-green store-bought tincture that has been under my sink in a yellow bottle for a year and a half, burst more with good properties than a 6 ounce splash of a stale Rhone in that same gallon? Only it looks so odd to water your philodendrons and things with reddish water. What if it kills them? What if it attracts bugs in this early fall heat? What if it works great? 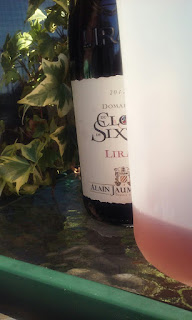 Meanwhile, chant: Three minutes and 42 seconds. Modern people (good looking people), modern dress. Twelfth-century music from our twelfth century friend, Hildegard of Bingen. I don't have the exact text handy, but it's Ave Maria and you will note the melismas, the long fluttering singing of many notes on one syllable. Of course you can also upload all sorts of very serious videos accompanied by Renaissance art full of flailing arms and legs of angels and spiky crowns, but then people think you are some sort of holy roller and all you want to show is that this is possible.

The soprano is Geraldine Zeller, the recorder player, Helge Burggrabe. Concert in February 2010. No applause! You're in church.

Dipping a toe in new water

My dear things -- my fatheads, remember? -- I hope you won't mind, but I want to dip my toe into a new ocean of a topic. I might carry on with a houseplant or cocktail from time to time, and no I didn't forget my decision to immerse myself in the 12th century -- almost the very day I started a new job, so sorry! -- but now, what with one thing and another, I have decided to learn about Gregorian chant.

I kid you not. You may recall I've delivered myself of scattershot opinions about music before. I am just coming away from a nice little vacation from retail work, therefore from the awful music that serves as retail's background noise almost everywhere; so the norm of awful, inescapable music is somewhat on my mind. I never noticed this soundtrack to all of American life until some years ago struggling into a French language textbook full of first-impression essays on the country. A writer in this book marveled at it.

Unfortunately, and here already we're talking about One Thing and Another, the modern Mass is similarly so well known as so full of poor music that I feel impelled to try to know what came before. We will certainly consult right away the fine and good-humored article "Can Bad Catholic Music be Stopped?" at Catholic Herald, and probably go on consulting it frequently and happily.

I should clarify. The topic of Gregorian chant is perhaps ninety per cent out of the blue, but not one hundred per cent for me. I read Rumer Godden's novel In This House of Brede a long time ago, too. In that alone lay a cursory education in the Divine Office, and its music, music, music. (The nuns get a new young postulant with a great high soprano voice. The choir mistress is thrilled to report to the abbess. " 'Mother! We can sing Gaude Maria Virgo again! Oh, Mother!' ") To be impelled: let's add it to our slowly growing list of twenty English words. Impel has the sense of being driven forward, unlike compel, which suggests driven together. From the Latin pellere, to drive.

Now to begin I must assume you have made for yourself  a " 'Gregorian Chant for the Seasons of the Year' radio" on Pandora. If not, there is always YouTube. This is how we must begin our learning, in bits and pieces. Only it's a bit immediately discouraging, when you load in something random having used just those keywords Gaude Maria Virgo, to see the comments from the exhausted young people that pop up below your result. "OMG, had to listen to it for Music Appreciation class." "For real nothing like old white people music..."

What I had got from my keywords was the above clip, Alleluia, O Virga Mediatrix, the composer, Hildegarde of Bingen (1098-1179 -- the 12th century!). It is meant to be chanted at a certain time during the Mass: after an Old Testament reading and sometimes a New Testament epistle, comes a reading from a Gospel; before the Gospel the congregation prepares itself by standing and singing  "Alleluia." Or it used to. More often we sing "Hah-lay, Hah-lay, Hah-lay, LOOOOO-yah!" to a kind of foot-stompin' hoedown tune with crashing honky-tonk piano accompaniment. Gracing her much nicer, medieval Alleluia, Hildegarde wrote a short acclamation of the Virgin Mary, perhaps to be sung on a Marian feast day. Note the title is O Virga, branch, not O Virgo, virgin.

Alleluia! O branch and mediatrix,
your sacred flesh
has conquered death,
your womb all creatures
illumined
in beauty’s bloom from that exquisite purity
of your enclosèd modesty
sprung forth.

The Latin and its translation are taken from The International Society of Hildegarde von Bingen Studies, which is also where we find the sheet music and a short reflection on the complex interweaving themes of words and music. Medieval people, the author writes, knew Biblical references to Aaron's flowering rod and the flowering branch of Jesse, and saw "the similarity of the two Latin words, virgo (virgin) and virga (branch or rod) ... [also] the illustration of salvation history as a tree of life rooted in those patriarchs and blossoming into the Virgin and the fruit of her womb was popular in medieval art."

Not only must we new learners address ourselves to that sort of background, it appears already we must learn some basic music. Like what a melisma is. "A succession of notes sung upon a single syllable," from the Greek melos, song. I did know one small thing about chant already, namely, that the more important or dense the meaning of the text, the more elaborate the singing will be. It's on purpose. You see how the last word orto, "sprung forth," is honored, by my count, with forty-seven notes thanks to its religious significance. That is going to require some memory skills, practice, and breath control.

And all this in the 12th-century Rhineland, which we shouldn't think of as some sort of Dark Age impenetrable green forest but we probably do. (Were they drinking riesling yet?) Given the professionalism of the soprano in our YouTube example, from whence -- we must ask -- could a 12th century German abbess expect to recruit the farm girl, wattle-and-daub nuns to sing this daunting material? Our cheerful author of "Can Bad Catholic Music be Stopped" has something interesting to relate.

In Britain and most of the West, we’ve lost the habit of communal singing. The only people required to sing together are primary school children, but it’s been decades since they were encouraged to stretch and develop their voices. As a music teacher told me the other day: 'Modern adults just can’t reach the high notes that the old hymns demanded. So they don’t even try.'

If medieval farm girls were presented to convents at the trainable age of ten as Hildegard of Bingen was, though granted she herself hailed from a manor, that might explain where the voices came from to sing Alleluia O Virga Mediatrix in 1150. How do we replicate that custom? For our part, we grapple only with hoedown Hah-lay-looo-yahs, or "Let There be Peace on Earth," its old sexist references to God the Father dutifully purged. And yet, encouragingly, who leads us in a cappella "Immaculate Marys" (the Lourdes Hymn)? Who even introduces the Latin Agnus Dei sometimes ("qui tollis peccata mundi")? The priest who is either quite old, -- or quite young.

On YouTube the bored very young roll their eyes at Hildegarde's "old white people music." They may never know what Dark Age peasants knew it meant. Meantime there are those few good-humored if testy blogs out there, commiserating on the singing of bad songs and the loss -- temporary, pray, a "Babylonian Captivity" -- of a heritage, an ocean, of complex Catholic musical beauty. The testiness and humor are encouraging too, in themselves, for in them are passion and wisdom. As a returning prodigal to the Mass, I read the testy warnings about "All Are Welcome" before being asked actually to turn to it in the hymnal. Frequently. "Probably what the devil sings to welcome souls to hell," a frustrated commenter had snorted. At the same website a man fumes about it all being traceable to the smarmy 1970s, "that kidney stone of a decade."

I like that, too. (They pass.) Only the English language could express that. Kidney: from the ME kidenei; < ?. Strange. That means no known derivation.
at September 18, 2017 No comments: