The last day of August is not the last day of summer, far from it. But the date, even in writing, has a sort of ripe and conclusive feel, doesn't it? The angle of the summer sunlight at around five o'clock in the afternoon on this day is just the same. Conclusive. Not too much longer .... A ripe Michigan peach casts a shadow, just so. 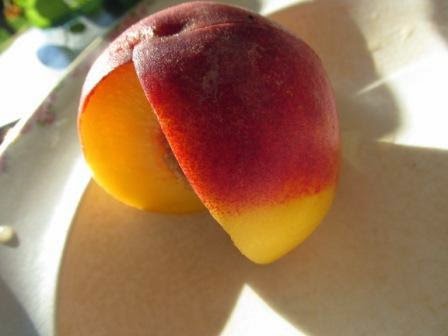 To accompany our peach we are sipping 2013 Oro de Castilla Verdejo, a fragrant white wine from Spain. We do mean fragrant. The aromas of cream and flowers waft right up from the bottle, and settle happily in the top of the glass. (So important to leave room.) The taste is at once crisp and lusty. Verdejo is the grape, the region of Spain, Rueda D.O. Why then the name, Oro de Castilla, "gold of Castille"? Because Rueda lies within the larger region of Castille. Conclusive. 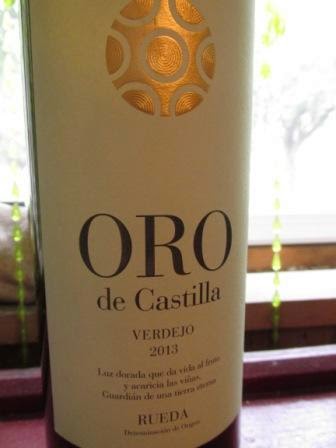 That book you glimpse, beside the glass, the peach, and the rather tired nasturtium plant, is an old copy of The Greeks by H.D.F. Kitto (1951). Someday, when my scathing and funny divorce novel/memoir is a runaway bestseller and editors beg me to do whatever I want, I plan to write a brief history of all those mid-twentieth century English classicists and historians whose names we encounter on the title pages of dog-eared Penguin books. For some reason they all only went by their first initials, and there were plenty of them. H.D.F. Kitto, E.V. Rieu, A. R. Burn, C. Day Lewis, S. A. Handford. Of course I am assuming that behind the initials and the long years spent translating Greek and Latin, they also had scathing and maybe funny lives. Possibly not. Still, they interest me because they strike me as perhaps one last cohort of modern men who were soaked in the wisdom of antiquity, and made judgements, about it and life and everything, before the progressive mania set about forbidding impure thoughts. (Before it set about forbidding classical education at all. David West, translator of The Aeneid in prose in 1990, "notes with sorrow that his career would not now be possible, since the departments of Classics at Aberdeen and Sheffield are now defunct.") What scholar today, for example, is going to so far forget himself -- or forget what fiercely open-minded martinets are in charge of tenure -- as to write of the "resigned immobility of the steppe-mind"? H.D.F. Kitto did.


City life, where it developed, was always conscious of its background of country, mountains and sea, and country life knew the usages of the city. This encouraged a sane and balanced outlook; Classical Greece did not know at all the resigned immobility of the steppe-mind, and very little the short-sighted follies of the urban mob. 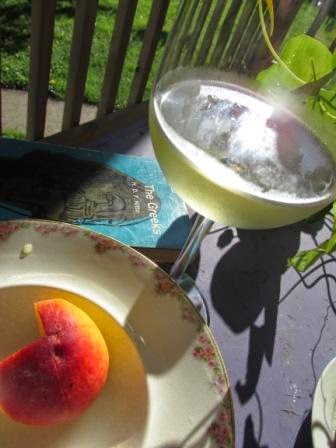 H.D.F. Kitto also wrote a travel book, "highly praised and little read," as the title page here allows, called In the Mountains of Greece (1933). Since I think he is a fine writer I would like to unearth this one. Oddly enough this is a bit of a challenge even in our information age. Will posterity hear warning bells? It probably has, long since. Both my Kindles are shall we say defunct, the local library no longer keeps old books, though to be fair this one is quite old, and even Amazon struggles. "Out of print -- limited availability."

Meantime, I forgot to show you the attractive porcelain dish that holds the peach. As luck would have it, the stamp on the back bears a classical reference. "Homer Laughlin, Genesee." 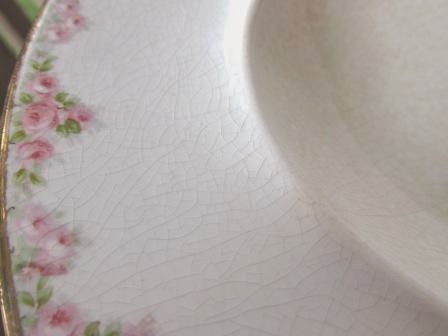 Now my fatheads, you mustn't imagine I have abandoned you. It's just that tearing up the carpet exposes one, not only to all that wood-floor craftsmanship circa 1893, but to unexpected necessities. One mops a lot, and rearranges furniture, and goes shopping for little things that have been on a "to do" list for ages, but never taken care of actually. For example I am looking forward to getting my first "Brown Betty" teapot in a few days. And then if one has to go out and buy a new router for the old exhausted computer, why, there's a day spent hooking up machinery and telephoning the Geek Squad for assistance. What luck that a new computer arrived in the mail, a hand me down from (wait for it) the ex-husband's ex-girlfriend's young son. (Thereby hangs a tale.) If only one could get the kid's picture off the home screen. It's a Mac. They were all artsy and everything.

So I haven't abandoned you. And you may have some lemon bread.

Turn batter into greased 8 and 1/2 inch bread pan. Bake 50 to 60 minutes. Blend remaining sugar and the lemon juice. Pour over bread as soon as it comes from oven. Makes 1 loaf. 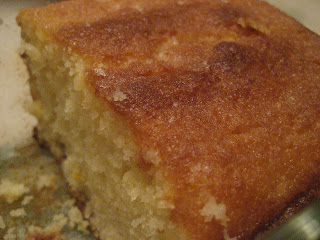 Measure twice, cut once. Take a look at the craftsmanship of a hardwood floor built, as far as I know, circa 1893. 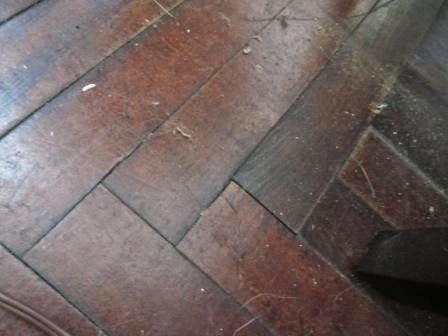 Somehow I think the men who laid this out are resting easier, beyond the veil, now that their work is no longer covered by the barbarism of wall-to-wall carpeting. My next task is to wash it up and keep it up to what must have been their standards. And their women, too. Imagine the long skirts of farmers' wives, trailing over this floor as they set out Christmas dinners, or rocked the baby by the sunny east bay windows.

I hope they all had a glass of wine, too. 2010 James Mitchell cabernet would have been nice. 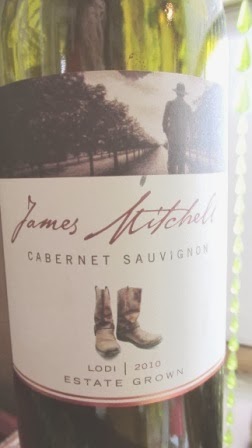