The weekend is almost here, and maybe you'd like to gussy up a weekend-treat roast chicken, duck, or a pork tenderloin with a whiff of the holidays just past. One way to do it is with my favorite stuffing/dressing in the whole world -- not that I've tried every stuffing or dressing in the whole world, but then, once you eat this, who needs to try any more? It's called Apple Stuffing, and it comes, with a twist, from my kitchen Bible, Marion Cunningham's 1986 revision of the Fannie Farmer Cookbook.

It really could not be much simpler. Core an apple (don't bother peeling it). Chop it in rough small pieces, and saute all the pieces in a small quantity of butter, perhaps 2Tablespoons or so. 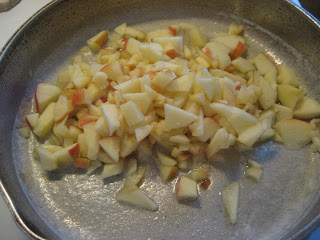 Add a few slices of cubed bread, wheat or white, heels or middle slices. Stir them into the apples. Add one-quarter teaspoon cinnamon and mix that in. Even if you love cinnamon and are playing with your other proportions, be careful not to add too much. You want a savory stuffing, not the effect of an apple cake. 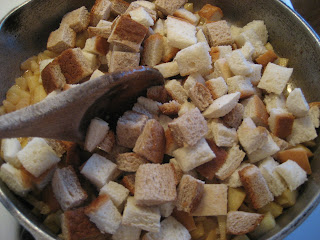 Stir and heat the bread and apples. You can now moisten the stuffing with wine, meat drippings, or a broth. Make it as dense, or not, as you like. 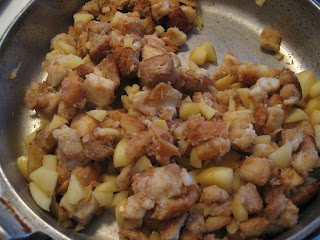 Once the mixture has reached a good consistency, pile it into a buttered glass baking dish. I use a 1 and 1/2 quart clear glass dish with a clear lid. I put the dish into a preheated 350 F oven for about 30 minutes. It all gets piping hot and the clear glass allows the bread to toast nicely. That way, the stuffing soaks up your meat or poultry gravy most deliciously. 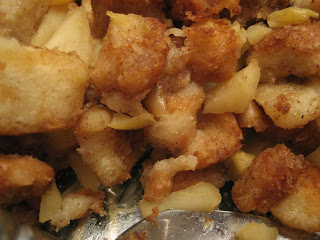 And that is quite, quite all. I never stuff the actual meat or bird in question, because I did that once and the stuffing came out horribly gray, wet, and sporting big purplish splotches from the ahem, cooking juices.

And doesn't it all just whisper chardonnay at you? Happy weekend, early.
at January 26, 2014