Just a few updates: Hey Mambo has changed its label, and not for the better in my opinion. (Now it's just washed-out reddish and pink stripes.) On the plus side, it's also not $12.99. More like $8.99 now.

I've got fond associations with this one. I first met it at my first wine job; I introduced it to the "set" at my second wine job. It's a house pour at a favorite local restaurant. The gentleman friend likes it. 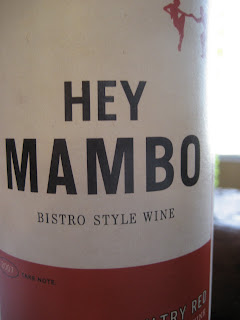 This is an all-over-the-road blend that I suppose could only be typical of California. Its grapes are, as the label orders them, syrah, barbera, zinfandel, petite sirah, malbec, and alicante bouschet (this last is a crossing of a grape called petit bouschet with the better-known grenache, and named after the botanist who bred it in 1866, Henri Bouschet).

I found Hey Mambo in a grocery store and grabbed it, remembering it was popular for good reason at what I should probably call from now on Ye Olde Wine Shoppe. The aroma of chocolate wafts up from the neck of the bottle as soon as you open it. I eagerly poured a little, tasted, and thought, yep. That's Hey Mambo. By the way, I vote No on the closure, which is an annoying plastic-capped plug difficult to get a grip on.

The flavors are everything that many people like about the California style of red wine, and are conversely everything that puts wine-drinkers with longer memories in a state of, not quite despair, but frustration. The wine is "jammy," thick-tasting, spicy, and full of fruit-sweetness. This is not sugariness, but a mouth-filling sensation which is not acidic, not bitter, not salty, not tannic. What's left? Sweet-ness: not Coca-cola sweet, but not stony dry either.

It's a mouth-filling sensation which is also the opposite of what those experienced wine-drinkers who lament California reds are looking for. They want finesse. And they want "drinkability," an odd thing to miss in a wine like Hey Mambo, which my ex-customers and I found delicious. What's undrinkable about chocolate-covered blueberries? Michael Broadbent, in Vintage Wine, explains:

...things have gone too far. Red wines are being produced which seek primarily to impress. The current vogue is for deep-coloured reds, full of fruit and flesh, sweet and easy to taste. They win gold medals. They are written about by wine writers who are always on the lookout for something new. The 'critics' on both sides of the Atlantic heap praise on monumental, small production, over-priced wines which are scarcely drinkable. The newer cult wines have no track record; will they ever come round?

...alas, it is even happening in Bordeaux. Dare I say it, the wines of many chateaux are becoming more alike in style, and the once stark differences between the various appellations are less distinguishable. European classics should be appreciated for their variety, their finesse, their ability to age gracefully and their sheer drinkability. Instead, we are being knocked off track by the outrageous, the obvious, the fashionable and the bland.

Hey Mambo is very tasty, but that mouth-filling sensation is after all a simple one, and in most cases simplicity, too, is a characteristic the opposite of finesse. And drinkability? What Mr. Broadbent means by that, as did our old friend Willie Gluckstern in The Wine Avenger, is suitability with meals. What meal do you pair with a drink, however delicious, of chocolate-draped blueberries?

And having learned this, just think what more there is to learn. Sipping a glass of Hey Mambo, unaccompanied, while reading about voguish, obvious reds, will be an experience just slopping over with finesse.
at January 26, 2014

Email ThisBlogThis!Share to TwitterShare to FacebookShare to Pinterest
Labels: reds