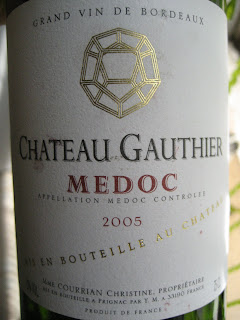 According to an article written by Robert Parker in September 2006 for Food & Wine, the greatness of the 2005 vintage in Bordeaux comes from weather conditions that also made great vintages in previous years: 2000, 1990, 1982, 1961. A very warm and very dry, almost drought-condition summer allowed the grapes to ripen to high sugar levels and flavorful complexity and to create high-alcohol, moderately acidic, high-tannin wines good for aging -- and good for Robert Parker's palate which, let us not forget, some people criticize as being horribly uniform and horribly devoted to the promotion of "fruit bomb," "monster" wines. To be fair, vintage notes from no less an institution than the great Chateau Latour agree with his assessment of the (wonderful) effects of the weather in 2005.

The Bordeaux I tried was from the Medoc region, on the left (west) bank of the Gironde estuary, from whence also come great wines with names like Pauillac and Margaux -- and Latour -- on their labels. Parker summarizes the Medoc's 2005 production as noted for "dry extract" (the grapes responded to the lack of water via a natural concentration of their juices) and high tannin. He refers in fact to "sweet" tannins, a new descriptor to me, and says these wines will not be ready to drink for ten to fifteen years.

That's a problem. I drank my 2005 already. Was its taste, chiefly of tangy red apple skins, the taste of high tannins and drought-stressed concentration? Would it have been better in 2018? And where do I place Chateau Gauthier in the pecking order of Bordeaux wines?

CellarTracker includes a handful of members' notes on previous vintages of Chateau Gauthier. Above the notes is a simple table of information where we find some obvious identifications to help place this maker in context. Yes, it's in France, the region is Bordeaux, and the wine is a red blend. Blanks for subregion and appellation are both filled in with Medoc.

Medoc, however, covers a lot of ground, if I may be pardoned the pun. For the more specific categories in the table, designation and vineyard, CellarTracker gives us only "n/a." Since in French law, the more specific the information offered on the label, the higher the standards to which the winemaker has been held and therefore the better the wine, what we have in Chateau Gauthier -- Appellation Medoc Controllee -- is a good wine not exalted enough to shout more specific characteristics to the buyer. It can't, for example, shout Appellation Pauillac Controllee, Pauillac being one of the six really quality-oozing subregions in the Medoc (there are 57 subregions in all of Bordeaux).

If it were a wine that could shout that, if it were, say, Chateau Latour Premier Grand Cru Classe, we would know we were buying a wine not only from a certain subregion in Bordeaux in a year of promising weather, but also from a particular and deeply historic chateau which, for this bottle, had used grapes from a certain vineyard, from vines of a certain age, harvested at a certain yield, and subjected to vinifying techniques and to aging which would bring us pretty close to Bordeaux perfection. (See Kevin Zraly's Windows on the World Complete Wine Course, 2007 edition, p. 119.)

And the experience would cost us some money, of course. I would say at a guess that there isn't any more Chateau Latour 2005 available in the world. Our cantankerous friend Willie Gluckstern, The Wine Avenger, would huff that it is all sitting right now in the cellars of rich orthodontists and plastic surgeons who habitually buy the finest Bordeaux en primeur, as futures. They commandeer the juice when it is fresh off the vine, before it is even bottled, and in fact would have just received their shipments of the great '05 vintage this past summer. According to Chicago Tribune wine writer Bill Daley in his article "Vintage of the Century? Already?" futures of 2005 Chateau Lafite Rothschild sold, in 2006, for $600 a bottle.

The more commonplace stuff, like my Chateau Gauthier, arrived on store shelves this past May priced at between $25-$30 a pop. It was in merry May that I got a chance to sample it. A wholesale distributor brought it in to the store for us to taste and see if we wanted to carry it for our customers. Alas, the store owner turned it down because she felt it was too pricey and also because -- and I quote -- she "doesn't like French wine." Now that the store has closed and I am employed elsewhere, I can give tiny, tiny vent to the astonishment and just slightly chattering rage I felt at hearing that. And I can muse, with a certain, tiny pomposity -- well, is it any wonder the store closed?

At any rate, to get my hands on any more 2005 Bordeaux, even of the humblest, I will have to keep my eyes peeled at wine shops and, dare I hope, at better grocery stores. I can investigate on-line buying but of course that's a problem, since the state of Illinois has fresh new laws about citizens buying their wine from just any old where, without the Illinois wholesale distributors' imprimatur. And for the future -- more puns -- I will have to do a sort of pre-homework where Bordeaux is concerned. The way to have savored a fine Pauillac at the peak of its development this ice-locked winter would have been to buy a few bottles of '82, another legendary vintage, when it was fresh and fairly cheap, in '85. No such luck. No such knowledge, at the time. 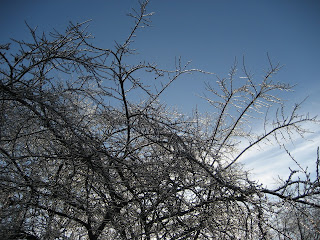 Now the 2008 harvest is in, and what was the weather like? And 2009 approaches ... the horizon expands. You can save up for a special purchase, make excited plans, generally live a winey-rich inner life, and all it requires is that you pay a little attention to the summer climate in Bordeaux.

Meanwhile, life goes on. Today's lunch was a grilled cheese sandwich with a glass of 2008 Frontera cabernet sauvignon-merlot blend, $6.99 for a 1.5 liter bottle. That's a magnum of the typical Bordeaux blend, from Chile, a good source of good value cabs and merlots. All the wine writers affirm so. Tasty, too. 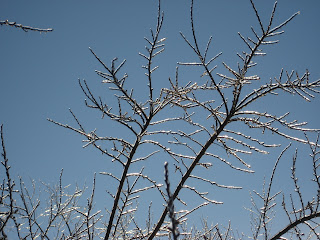