An update: to this, add a clove of diced garlic, a small piece of peeled diced fresh ginger -- think of it as a "clove" of ginger -- and sliced fresh mushrooms, patiently seared in butter over high heat so that they brown rather than steam. Most delicious. November 12, 2010.

When I was growing up, pepper steak was one of my favorite meals. Although I am sure we had it year round, I associate it with summertime, open windows, and pitchers of iced tea on the table, glowing amber in the afternoon sun. It was just a stew of beef and green peppers -- not to be confused with the genuine steak au poivre, which is a slice of beef rubbed with astonishing amounts of cracked black peppercorns and quickly pan-fried -- but it takes some thinking out. Naturally, the way you cook it will determine what cut of beef you buy, or vice versa.

My dad made it as a fairly long-cooking stovetop stew, and I've made it both that way and in a crock pot as an extremely long-cooking stew, with the help of recipes calling for good-sized doses of soy sauce, Worcestershire sauce, canned tomatoes, and ground ginger. Both those preparations enable you to buy big, economical pieces of beef chuck that will soften with the passing hours. Both preparations also leave you with a dish that is rather muddled and smothered-tasting; somehow bell peppers seem happier when not cooked to oblivion. I've eaten pepper steak in restaurants, where the meal comes to the table far more speedily. There are seared slices of much more tender beef, cooked in butter, presented still rare and bundled with strips of green pepper and onion that remained a little too crunchy for me.

So, what to do, especially if the family requests pepper steak at 2:00 p.m., when the slow-food, cooked to oblivion version really should have been in the oven by noon? I have attempted restaurant style pepper steak before, and failed -- good beef wrecked by too many crock-pot ingredients, or too much sauce boiling the meat to shoe leather in a moment of forgetfulness. This time I went to the store and picked a few pounds of a cut of beef that would prove tender and cook quickly, but not be jaw-droppingly expensive. My goal for the day was not to ruin that meat ... 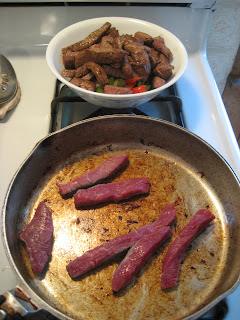 ... and yet not to serve it looking a color that I would call Supermarket Red. I saw beef that color some months ago, at a wine tasting, in fact. An aspiring young chef came to the store for a special occasion and prepared a series of appetizers to accompany wine (or vice versa). It was very nice, but he offered to everyone some slices of barely seared beef tenderloin that were terrifying in their inner redness. In their inner redness they might have come straight from the supermarket styrofoam tray. Apparently they were safe. Nobody came back and sued us. If nothing else, it taught me a little more confidence in my beef cookery. If this young man is a professional and can serve that without risking jail time at the behest of the Health Department, then lighter shades of pink must be all right at home.

So I began at about 4:30 in the afternoon with my usual ingredients, a sliced onion, olive oil, and a chunk of butter. And my workhorse heavy-bottomed frying pan, bought when we were first shopping excitedly for pots and pans before we got married, and he wanted the Magnalite he grew up with and I wanted the copper-bottomed Revereware I grew up with. We compromised and got a few of both, and the Magnalite has proved more valuable to me, even though we did worry a bit about rumors, in the '90s, that it causes Alzheimer's.

After the onion cooked to softness and the sliced clove of garlic had warmed a little on top of it, I added the sliced green and red peppers. After they had softened -- but not to oblivion -- it was just past 5:00 and time to add the beef. Only a few at a time, as the cookbooks say, and only seared to inner pinkness. Then they went on top of the vegetables in a bowl, to be returned to the pan after I had devised some sort of sauce for them to finish in.

A sauce of what? Canned tomatoes are far too much. One tomato will do, a little water, and a pinch of ground ginger, and a snippet of fresh basil from the pot on the steps outside. (Don't be too impressed. It's the only herb I have been able to grow all summer. I also planted wax beans, late, and was able to harvest I think seven of them.) 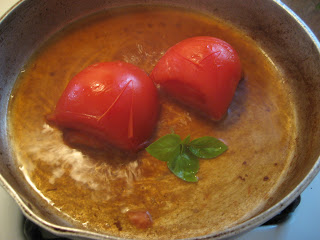 A tomato in water can boil as furiously as it likes and harm nothing. In the meantime I cooked rice and a pot of green beans (alas, rather tough). By 5:20 I was ready to pile the beef and peppers back into the pan, warm everything, and serve it forth, as M.F.K. Fisher would say, at about 5:30. No soy sauce, which is glorified salt. (I wonder what real Japanese soy sauce tastes like?) No Worcestershire, which is glorified God knows what. I tend to agree with Marion Cunningham, who in her most recent cookbooks has been saying that no recipe should call for more than five ingredients, including salt and pepper. 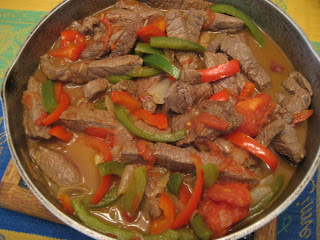 This was about the best I've done with pepper steak, in terms both of ease of preparation and, more importantly, of meat not ruined. "How's the beef?" I asked, continuing, "I was very careful with it." It was all right. A few pieces even verged on being Supermarket Red, which I considered almost a personal triumph.

The wine on hand: a Thomas Fogarty Gewurztraminer, whose sharp spice and full body proved a surprisingly good pairing.
at January 29, 2014