What would Mrs. Wilberforce drink?

A few days ago, some friends and I were discussing, among other things, gray hair. We are all at what I think the French politely call "un certain age." Nancy dyes, I don't, Melanie doesn't need to. Nancy mentioned a colleague who proudly does not dye, and who says, "I earned every one of these gray hairs."

I wonder. Not long ago I watched the old Alec Guinness movie The Ladykillers, in which the otherwise practically unknown Katie Johnson plays Mrs. Wilberforce, the sweet or eccentric or dotty or formidable (insert better adjective here) Old English Lady. In this movie, set in the (contemporary) 1950s, she dresses in the fashions of the 1910s, speaks beautifully, recognizes Boccherini, defends abused animals, hosts crowded tea parties, cherishes the memory of the late Captain Wilberforce who drowned in a typhoon in the South China Sea while rescuing the parrot General Gordon, and otherwise drives Alec Guinness and his gang of bank robbers to distraction. When she relaxes with a book in her parlor, you just know she is reading Shakespeare or Alexander Pope, or a biography of Disraeli. She is the old lady I want to be. 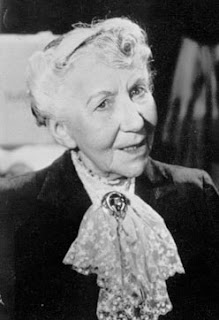 Of course she's a fantasy -- people who know the movie notice that the screenwriter and director were both Americans -- but as philosophy teaches, to what can we aim, in any department of life, if not perfection? Mrs. Wilberforce does not dye her hair. In fact during the crowded tea party, she and her many friends all warble the old song, "Silver Threads among the Gold." There seems to be something about her, about that firm pink-cheeked face, nobly hooded eyes, and carefully set gray hair, which bespeaks a lack of anxiety about stopping things that can't be stopped. One gets the impression that this lack of worry leaves her time for Pope, tea parties, and Boccherini. That it makes her, perhaps -- ageless?

What would Mrs. Wilberforce drink? I suspect she would drink what the cookbook and manners writers of her youth would have suggested, the standard sherry with soup, Sauternes and whites with fish, claret with game and champagne with the roast. Cafe noir and bonbons in the drawing room, of course; one simply cannot imagine her guzzling diet Pepsi dressed in a fleece warmup suit after her workout. How nice it is to lament the lapses in tasteful, adult living that seem to have occurred before one was born, and that are therefore not one's responsibility. Certainly, then, one is excused from trying to ameliorate them -- one may simply complain. Always fun. Besides, isn't the world full of far more important problems? I wonder.

As a tiny little point of comparison, consider that when she made The Ladykillers, Katie Johnson was about 77. Not much older than Gloria Steinem is now. That icon of youth and freedom, of the appraising eye and the milky skin and the flowing hair, will be 74 a month from today.
at January 30, 2014