In a tearing hurry, again, but "ancora imparo"*

Sometimes Saturday nights are a tad slow at work, so I use the time to self-crash-course my way to more wine knowledge. Last night, what started out as a simple mnemonic project, with the computer and a couple of encyclopedias at hand -- write down all the names of the 61 Bordeaux chateaux from the 1855 classification -- turned into an interesting bit of sleuthing. And now I know a wine I want to try, but that I don't know how to get.

In the middle of the official list of the classified growths, right in the middle of the "Troisieme crus," is Chateau Langoa-Barton. I had never heard of it, even though being in charge of the French wine section for the past four months has left me with at least a working knowledge of Bordeaux. My plan for last night's self-crash-course was to focus on the chateaux I did not know, cross-reference them in our store's chainwide inventory, and, if it turned out we did not sell them, investigate if possible why.

This turned interesting quickly and it showed a pattern quickly. I really needed to look up only one or two names, here or there. (We sell a lot of Bordeaux.) Rauzan-Gassies was unfamiliar; turns out it is known as an underperformer. Same with Durfort-Vivens. Both are "second growths." Then came Langoa-Barton, as I say in the middle of the third growths. If you scroll down through its reviews at a site like Wine Cellar Insider, you see it gets a lot of scores in the high 80s or low 90s. We don't carry it, either. That's the pattern.

But Langoa-Barton is not regretfully labeled an underperformer. I took notes on its reviews because they, too, all showed a pattern: "tannic." Masculine. Strict, classically styled. "Classic personality." Tannic, classic, earthy, cedar tobacco. Tannic and firm. Tannic, classsic, old school. Austere, tannic, firm. Powerful, masculine, beefy, "well suited for fans of traditionally styled wine." And tannic -- did we mention tannic?

So it's interesting that this low-pointed wine, I should say this chateau's wines, high 80s and low 90s, is not faulted by its reviewers as unsound. Only they seem to struggle to give it fruit metaphors, while images of dryness and inanimate things, or vegetal things, abound. It's as if the wine is less like fruit and more like the wooden box the fruit came in. Yet they keep calling it classic and traditional, and thus my curiosity is piqued, all the more because my research tells me Langoa Barton is the only classified growth still owned by the same family as in 1855. That's good, surely, if you want to reach back in time and get your hands on a bottle of a cabernet-merlot blend (that is what we are talking about) not overwhelmed by the modern love of 95-point, blueberry-pie-with-caramel-fudge "monsters."

I'll let you know where else my self-crash-course wine learning takes me. Thank God I found out what Abacus is before the nice man browsing the wine cellar pointed it out to me as one of his favorites: I was able to do something besides nod and smile about it. He left not with Abacus but with a three liter bottle of Chateau Giscours 2005 (Troisieme cru). That was fun. It's amazing how the store staff suddenly seem to lurk while a purchase like that is being gently cossetted out the door. I mean, we're not on commission or anything.

Now I have to pack up and move. 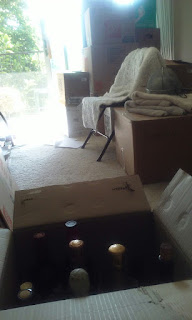 * "I am still learning," attributed to Michelangelo at the age of eighty.

I entered the Hendrick's gin contest

Captain Tarquin Shakespeare met the great alien Zephirine Felicite immediately upon leaving the galaxy's edge. She was all wings and eyes, and did not understand time. "How is it," she asked, "that your planet, merely in orbiting its star, causes living beings to 'age'?"