"... the sheep moreover are insolent"

"So you wish to stray and be lost? How much better that I do not also wish this. Certainly, I dare say, I am unwelcome. But I listen to the Apostle who says: Preach the word; insist upon it, welcome and unwelcome. ... However unwelcome, I dare to say: 'You wish to stray, you wish to be lost; but I do not want this.' For the one whom I fear does not wish this. And should I wish it, consider his words of reproach: The straying sheep you have not recalled; the lost sheep you have not sought. Shall I fear you rather than him? Remember, we must all present ourselves before the judgment seat of Christ."

From the Second Reading for Sept. 24, Office of readings of the Liturgy of the Hours (Monday of the 25th week in ordinary time) -- St. Augustine's Sermon on Pastors: "Insist upon the Message, whether it be welcome or not"


Driving home from work to see the full moon reflected in a glimmering slash of silver-gray in the dark gray waters of the local slough, itself a shadowy depthless presence in the surrounding forest night; you know how the mood of a lake changes, especially if you have vacation memories of marveling at water that was a sunny sparkling blue playground in the daytime, become a strange flat dark disc ringed with mysterious impenetrable vegetation, and possessed by sounding crickets at night; with the nice medieval music playing in the car (the library was literally giving unwanted CDs away, so I got a trove of Gregorian chant, some medieval Christmas, the odd Schubert and Debussy), -- doing this, I felt the Jeep was a more sacred space even than the church had been the Sunday morning before. Very wrong of course, but music will have effects, and the music for Mass had been more jamboree-like than usual. A small crowd of sympathizers, I won't say Commie-pinko plants, turned and clapped and whooped appreciation at the end, as usual.

The nice young seminarian, thank God there are still some, gave a talk. He said he would be with us on weekends for the next five years of his discernment. He welcomed calls and emails from any of us, looked forward to getting to know us, and said his email address would be in the bulletin. I won't be crabby and uncharitable, and say how tempting it is to take him up on his offer and write, Dear good young man, I do hope when you get your own parish you can make some sort of inroads into the ghastly music we all must hear and have heard for fifty years. Why does Marty Haugen, Protestant wunderkind, still govern the liturgy? (I have an ancient, slightly saccharine book called St. Michael and the Angels, Compiled From Approved Sources, which tells me for example, "St. Michael offers to God the prayers of the faithful symbolized by incense whose smoke rises towards heaven ... his name is mentioned in the confession of faults made by the priest at the foot of the altar, and by the faithful in turn ... St. John Chrysostom, among others, states that 'When Mass is being celebrated, the Sanctuary is filled with countless angels who adore the Divine Victim immolated on the altar.' " Who knew? What incense? What Divine Victim? To think that this was the sort of thing got rid of for the sake of contemporary relevancy, and bongo drums.) ...The whoopers at the end are not the majority. I judge this by the grim, clamped-mouth silence of most of the congregation. Most of them are, at best, offering up their suffering to God. They don't want to clap in unison with the happy blonde at the podium, either.

But I won't be crabby and uncharitable, for what do I know? Can't sing, can't read music, can't play an instrument. It's very wrong to suspect that musical people are oddly authoritarian. "Better to light a candle than curse the darkness," and so on. Why not ask to join the choir and make changes from within? Can you imagine the new person, unable to carry a tune in a bucket, suggesting to the seasoned performers and the professional choir director fresh from his role in the off-Broadway show in the next suburb over, that we start singing Hildegard of Bingen? Perhaps I should write a novel in which a crabby -- but musically able -- old woman does this, or at any rate writes that letter to the visiting seminarian. She could be formidable but elegant, and perhaps solve parish mysteries (who killed the blonde?), and have two cats named Sassicaia and Egypt.

The CD in the Jeep, which made the moonlight on the water seem like something eternal and sacred that God himself and all the communion of saints were looking at right that moment, also has the word ancient in it. It was Ancient Music for a Modern Age, by an ensemble called Sequentia. They have been doing God's work for forty years. They have even recorded everything by Hildegard of Bingen, nine discs. Who knew?

We began with St. Augustine telling his parishioners in Hippo around the year 400, that -- yes -- he and they were obliged to bring in straying sheep, even if the sheep were insolent and did not want to be retrieved. What an amazing thing. I'm just adding, at the risk of beating my own bongo drum that I may go on beating for a good long time, good music would help. 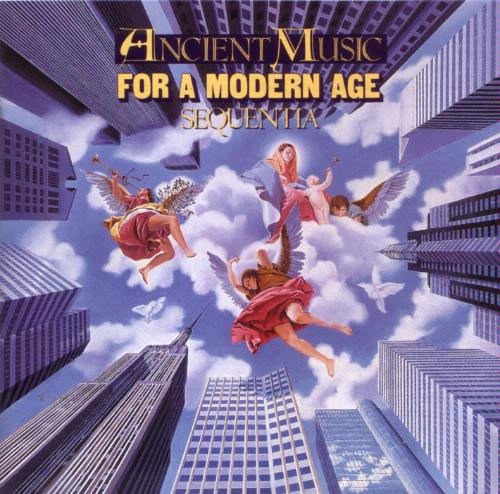 I have an uncharitable habit of imagining how I may reach people through lofty and rapier-like intellectual scolding. The young things at work were outraged, yesterday, by whatever videos they had seen on some correct and outraged political site. "She interviewed this Trump supporter, and the guy didn't even know what a refugee was! He just kept saying, 'I don't believe that.' "

"Oh my God," the other young person said. She may have said oh my Jesus fucking God. "Oh my God. Kids are dying because of this asshole." And she stormed off, speaking in the asshole's voice. "Yeah, just fuck the kids, who cares."

These (mostly polite and good) young people have a raging passion for justice but would of course not dream of marrying their significant others, settling down, and having any children of their own, for a start. Never mind the college 101 indoctrinations, defining justice in very narrow terms, and still as fresh as yesterday. Naked but sterile evangelical outrage simmers beneath every dewy-complexioned surface.

And I fancy pondering how to correct them through gently startling rhetoric. Then I heard a caller on Relevant Radio, a lady marking the feast of the Korean martyrs, say that she brings a prayer journal to work and writes down in it the names of people whom her co-workers have asked prayers for. And I realized, that is the much better way. As with the Gospel reading of that very day, in which the Pharisee Simon loftily notes within himself that Christ cannot be a prophet, or he would know the truth about the sinner touching him, in other words he would see interior lack, and Christ responds to his thoughts -- she loves much because she is forgiven much -- so it would be more to the point for the outraged young people to know the offer of prayer rather than an offer of what I consider probing intellectual correction. Love first, in short.

The downside is that one must consent to be the sweet (I suppose) religious middle-aged lady at work, who says she will pray for you. Then again, if it's totally crazy but you do kind of start noticing good things happening to you, it's so weird -- maybe they would also think a thought, and crack open a book.
at September 21, 2018 No comments: