The one trick to poaching an egg

One morning I began my news surf over at Orangette, where I am a "lurker" because I never comment. Molly's most recent posts detailed a simple dish of a fried egg on a bed of kale on toast.
Mercy, I thought -- I can do that. My egg is poached, and the greens are spinach, not kale, but otherwise it's the same. Is it all right if the photograph was taken last April? I make this all the time. 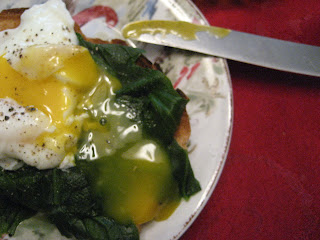 The recipe is so simple it hardly counts as one. Make toast and butter it. Boil some water in a shallow pan. Place a handful of fresh spinach into it, stir it, let it wilt -- this is almost instantaneous -- and take it out with a fork. While it is draining on a paper towel, poach an egg in the nice green spinach-water. There is only one trick to making a poached egg, and that is to learn, through practice, how to pry the egg gently off the bottom of the pan without breaking the yolk into the water. The egg will stick, and that's that. Neither greasing the bottom of the pan first, nor adding vinegar to the water, nor creating a whirlpool in the water before adding the egg, has ever helped me.

Watch your timing. When you have pried the egg off the bottom of the pan and it is done, lift it out of the water, drain it on paper towel, and place it on top of the bed of spinach which you have piled on the buttered toast. Add salt and pepper, and you are ready for lunch.

Somehow, tea or coffee seem a better match with this than wine, unless it is a dark and snowy winter afternoon and you want a small glass of something powerful, red, and warming with it. Or even -- a sip of tawny port, and then a little chocolate?