Another library book sale treasure, picked up for one dollar about a year ago, was this, published by Houghton Mifflin in 1958: 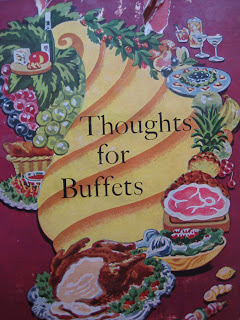 It is the "companion volume" to Thoughts for Food, which I have not yet been lucky enough to find. Thoughts for Buffets, however, must have been popular, as the library recently sold a second cast off copy in another book sale -- sold it to us, as it happened. I couldn't go to the monthly sale and so I asked my daughter to look out an interesting old cookbook for me while she was there. "Pick any one that looks good," I said. Not knowing my collection, she brought home, once again, Thoughts for Buffets. Great minds must think alike, I told her.

Among the carefully arranged menus, recipes, and advance preparation schedules for dozens of buffets, there is a delicious and simple winter stew called Brisket Arcadia. (I love the fact that old cookbooks were written by literate people who knew enough to call a recipe Arcadia, and assumed the reader and cook at home would know, too. Arcadia was a pastoral region of ancient Greece, and has always been a byword for peaceful simplicity.) As long as you take care to block out seven hours to prepare this meal, you'll find the actual work involved is almost nothing. 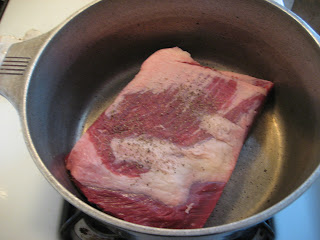 Start with a brisket of beef. Season it with salt and pepper, add water to cover, bring it to a boil, and simmer for 30 minutes. 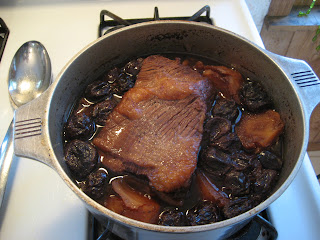 Then add 1 cup of dark corn syrup, 3 or 4 white potatoes, halved, and a pound of prunes. Simmer for 3 hours. 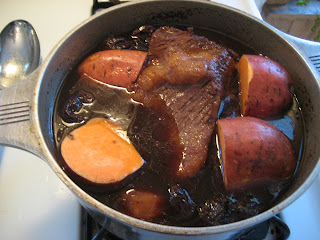 Then add 2 large sweet potatoes, halved. Simmer 3 more hours. Be sure the meat is always covered with liquid, and DO NOT STIR, the recipe exhorts. "Shake the pot from time to time to be sure the meat is not sticking. The meat and potatoes should be a luscious red-brown when prepared." (They are.) 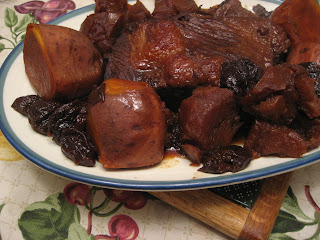 Serve it forth, as even older cookbooks say, with the meat surrounded by the potatoes and prunes. Brown rice would be an excellent accompaniment, unless like me you find that you are all out of brown rice at the moment. Luckily, there is a new, adventurous (for us) vegetable to go with the new, adventurous dish. We had mashed rutabaga with butter, salt, pepper, nutmeg, and cream. My thirteen year old son actually reached out for it. And ate it. 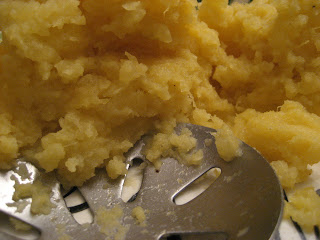 Our accompanying wine was Agua de Piedra, a delicious, uber-cheap Argentinian malbec (Daniel Fernandez, Mendoza 2006). A wine of meat and fruit flavors happened to be just right with a meal of meat and fruit. The malbec grape, formerly put in red Bordeaux, is now scarcely grown in France and has become instead Argentina's pride. At $5.99 a bottle, I'm proud of it, too.
at January 26, 2014