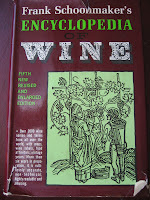 It's fun to come across a wine book from thirty or forty years ago and find that it now contains just slightly outdated information. The grapes don't change -- much, although vitis vinifera in general is said to be quite prone to sudden sports and mutations (Karen MacNeil in The Wine Bible) -- and winemaking is still a matter of sun and rain, ripening, fermentation, and waiting. What changes, I suppose, is fashion and business trends, in wine as in anything else. Here is Frank Schoonmaker on the chardonnay grape, in his Encyclopedia of Wine (1973):

"In California, due to its extremely small yield per acre, [chardonnay] has not been widely planted; its wine, almost always marketed as 'Pinot Chardonnay,' is perhaps the best white table wine made in the United States ...."

Flash forward a few decades to spend some time with one of my favorite wine writers, Willie Gluckstern, and you will find an entirely different opinion on chardonnay. (I like Gluckstern's The Wine Avenger precisely because he is so opinionated he makes things easy for a newcomer to understand. Later on, we can learn subtlety.) By the time he wrote, of course, chardonnay had become the grape that ate California. He considers chardonnay ridiculously overrated, lacking in aroma and flavor, but bland enough to take on a nice, consumer-friendly, and rather sweet uniformity through fermentation in oak barrels -- or simply through being aged in stainless steel fermenting tanks along with giant "teabags" of oak chips. Jancis Robinson, in How To Taste, agrees with him on chardonnay's intrinsic blandness ("perhaps that's why so many people like it," she hints) and also points out the grape's tendency to reach high alcohol levels, which among other effects can make the wine taste still sweeter. That easy-to-pronounce, easy-to-spell name is no drawback.

But dear me, what are we to think if we still like chardonnay? Are we bland? And wasn't the grape designated "noble" a long time ago?

It seems that chardonnay keeps pride of place in the wine books as well as in the vineyards because, no matter what fashion and business trends come and go, it retains the characteristics of "nobility": it is a grape that can produce consistently excellent wine, capable of aging well in the bottle. Excellent here seems to imply not just our reaction of gee-this-is-tasty, but to mean complex, different each time, changing, even mysterious. In other words, perhaps, it means responsive to the wine maker's art. After acknowledging the grape's basic blandness, Jancis Robinson nonetheless goes on to describe what a great chardonnay will taste like, and she uses words like broad, weight, meaty, fullness, intensity, serious, fascinating, and powerful. Some combination of physiological factors -- sugar levels, acid levels, skin thickness -- have to be present in the grape for this kind of mysterious excellence to emerge in the wine, and for noble to be applied to the variety. And even before the winemaker's expertise can be factored in, the grape has responded to the climate. And to the soil ...

The chardonnay grape is native, as far as botanists have been able to uncover these things, to Burgundy in eastern France, and that is exactly where the greatest chardonnays -- "white Burgundies" -- are made. It was here also that wine makers learned to ferment chardonnay in small oak barrels, giving the wine new flavors, clarifying it, smoothing out some of its astringencies, and helping it age (from How to Taste). It is these wines -- a Meursault, a Montrachet, named European-style after the place, not the grape -- that will set you back $35 or $40 a bottle at least. Because white Burgundies have been so good for so long (nobility, again), Burgundian wine making techniques are followed anywhere chardonnay is grown. And that leads to, as Robinson puts it delicately, "a remarkable uniformity among BFC's (barrel fermented chardonnays) virtually everywhere."

So much so that there has been a reaction, and on some chardonnay labels now you will see the proud announcement that the wine is unoaked. Here, winemakers are not bucking but are still following French traditions. Some French chardonnays have almost always been unoaked, particularly in Chablis, the very northernmost region of Burgundy. (Which means, strangely enough, that a Chablis is a Burgundy.)

As it happens, thirty-five years ago Frank Schoonmaker's encyclopedia entry on Chablis was far longer than that on chardonnay. Even then, place names were better known than varietal names. He tried to dispel the confusion. "Those interested in finding a California counterpart [of chablis]" he said, "should look for bottles labeled 'Chardonnay' ...."
at January 30, 2014