There is no joy quite like the joy of library cast-off book sales. Okay, there are other joys, but no joy quite like this one. At the sale I most recently attended, I scooped up three new cookbooks, one of them being French Country Favorites, published by the Bon Appétit magazine people in 1987. That very afternoon in thumbing through it I found a recipe that I had to try, because it featured cinnamon doing savory rather than sweet duty, and I must leap at any savory dish made with my favorite spice. It was "cauliflower soup with cinnamon." 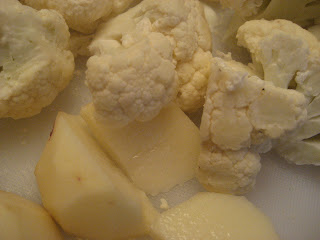 You begin with a head of cauliflower, chopped into florets, and two boiling (not baking) potatoes, also chopped roughly. Saute them for ten minutes or so in about 3 tablespoons of butter. Then add salt, pepper, and one-quarter teaspoon cinnamon. 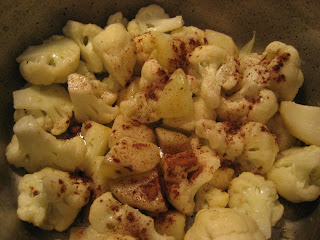 Then add 4 cups of water, bring to a boil, and simmer gently for only about fifteen minutes, until the vegetables are cooked.

Now you will purée the soup in a blender, and return it to the saucepan to reheat. Add one-quarter cup of whipping cream, and blend this in. The soup is ladled into bowls and each serving is garnished with a sliver of butter, a sprinkle of cinnamon, and some fresh snipped chives if you have them. I regret I didn't have them.

This soup is definitely for those who really, really like cauliflower. Madame Du Barry, for instance. La Du Barry, born plain Jeanne Bécu, was the last mistress of the French king Louis XV, he of "après moi, le déluge" fame. The poor lady had her head cut off during the Revolution, because she made the mistake of returning to Paris from London in order to retrieve her jewels from the chaos, and so betrayed herself as an aristocrat. They dragged her screaming to the guillotine; her last words were a desperate refrain of "wait a minute -- wait -- sir -- just a minute" to the executioner. In better times, la Du Barry had been so fond of cauliflower that "the royal chefs created special dishes aggrandizing the crunchy, creamy-hued vegetable," and to this day, preparations called "à la DuBarry also connote any dish that is garnished with the pretty little florets" (from La Bonne Soupe Cookbook, by Jean Paul Picot and Doris Tobias). La comtesse would have loved this soup.

I didn't care for it. I tried amending it with a splash or two of madeira, that unique, strangely salty, tawny, orange and apricot-like fortified wine which I had on hand because I made a special trip to a good wine store to get it. Nothing doing. The cauliflower simply picked up any madeira taste and threw it right out of the pot, and I thought, I am not wasting any more wine in this battle.

So I served the soup forth, luckily having put a chicken in the oven to roast and feed the family with while I experimented with this. It was not a big hit. But who knows? Love of cauliflower (or not) may be genetic. Lots of other people might find the soup delicious. And I have lots more hunting to do, in the cookbook section at the next library book sale.