In that fun old movie, Life With Father, Clarence Day (William Powell) strolls down the stairs of his house with his wife Vinnie (Irene Dunne) on his arm, and asks her, in the midst of some swirling upheaval with the servants that he has caused, whether they can't have "chicken fricassee tonight for dinner." She replies only that he must know "chicken has gone up, it's eight cents a pound!"

The plot of the movie unfolds such that the Day family and guests all end up dining at Delmonico's instead, but the way he almost smacks his lips over chicken fricassee does make it sound good. It sounds like just the sort of rich, comforting fare a New York gentleman of 1883 would want to come home to. In her reworking of the Fannie Farmer Cookbook, Marion Cunningham agrees it is "a great old-fashioned dish, the essence of chicken in a creamy sauce." 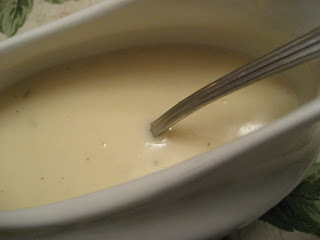 It is, however, another recipe which calls for the braising of chicken pieces, that is, browning them in melted butter or oil and then adding water, some usual soup vegetables (onions, carrots, and celery), and simmering all until the chicken pieces are done. Then the chicken is taken out of the broth and the broth used to make a sauce in a separate pot, where a roux of butter and flour is bubbling. The addition of a cup of cream and 2 Tablespoons of lemon juice finish off this sauce, and dinner is served.

It makes for an efficient production, with one step leading logically to another and no effort wasted. I can well imagine the Day's cook, stout Margaret, bustling about in the kitchen in her draggy Victorian skirts and getting all this ready for a family of six in about an hour, meanwhile teaching the new servants their business.

But I have never perfected the art of braising chicken pieces. I can never quite get the browning right. Everything is pale, the chicken skin becomes soggy, the meat rubbery. For braising recipes, I have learned to prefer roasting a whole chicken and making any sauce separately. To capture the chicken flavor needed, I keep pouring off the juices from the roasting pan into a clear Pyrex cup. Their fat rises to the top and I can then siphon off the good juices from below with a bulb baster, incorporating them into the sauce.

Chicken fricassee is a bit different from some braising recipes, however, in the very large amount of broth it produces for you to use (after browning in fat, "pour on boiling water to cover the chicken"). To replace that, I made a chicken broth of my own. It was a Sunday afternoon. Nothing easier. Chicken pieces, onions, celery, carrots, and water, salt and thyme, brought to a boil, skimmed, and simmered for three hours or so. 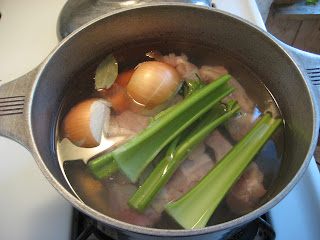 This big pot of soup will give you not only the 1 and 1/2 cups of broth you need for the lemon cream sauce, but also enough liquid to cook the rice to go with dinner. Before you know it, while your roast chicken rests on a plate, you will be multi-tasking, like so: 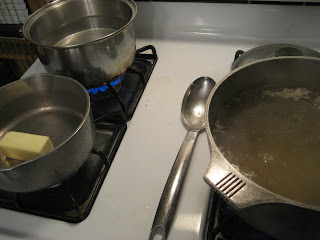 Above, butter melts to begin the roux for the sauce, while the remains of the chicken stock boils to cook the rice. A pot of water boils in the back, for some green beans. 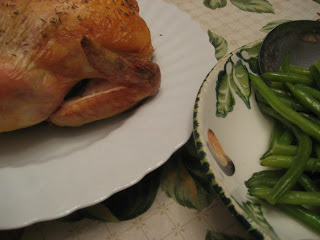 Of course, done my way, chicken fricassee is no longer a fricassee. It is a roast chicken with a lemon-flavored bechamel alongside, and it amounts to nothing that any accomplished chef would be impressed with. (I only just realized this, much to my mortification, when I a)planned to submit this very post to a foodie website that desires original content, and b)noticed that this same post gets some of the highest traffic numbers of anything else I've written here. As Mr. Day would put it, "Oh GAD!")

Mortifications aside, now Mr. Day would be summoned to the table. I think he would be pleased. As to the foodie website, he might growl as he did over the children's catechism, "What do you want to fool with that for?" The lemony sauce over the rice simmered in chicken broth is utterly divine. If only Margaret had had more help in the kitchen, she could have produced an even robuster Victorian meal, including a soup to start, and perhaps rice croquettes with currant jelly, and asparagus on toast, and some sort of dessert to follow -- prune whip perhaps. (These are all from the menu suggestions of the 1896 edition of Fannie Farmer's Boston Cooking School Cookbook, Marion Cunningham's source material).

Mr. Day, who spoke French so fluently at Delmonico's, would also know what wine to drink with this. I wonder if he would have turned to "hock," i.e. Hochheim wine, i.e. wine from the vicinity of Hochheim in Germany, i.e. riesling. This hock was a later, generic British term for the Rhine wine -- i.e., German wine -- that they had generically dubbed "Rhenish" throughout the middle ages. The British, as Michael Broadbent writes in Vintage Wine, "have been importing Rhine wines for a thousand years. Not only were the wines palatable but transporting them was relatively safe and easy: down the Rhine, pausing only to pay robber barons a toll, and a short hop across the North Sea." By Victorian times, excellent German wines were fashionable and expensive, on both sides of the Atlantic to be sure, more renowned and sought after than the finest Bordeaux. Hock entered the American language too at some point, for in his late-1960s Encyclopedia of Wine Frank Schoonmaker noted "it is still legally possible, under American regulations, to manufacture California and indeed New York and Ohio Hock." From what grapes these treasures were vinified, Schoonmaker does not say, but if they existed in 1883 I doubt Mr. Day would have had them on his table. ("Oh, Gad!")

The original recipe for Chicken Fricassee follows, for those who would like to tweak it to suit themselves. Or for those who know how to braise a chicken.

Rinse the chicken and pat it dry. Heat 4 Tablespoons of the butter with the oil in a dutch oven, and brown the chicken on all sides. Lower the heat, pour on boiling water to cover the chicken, and add the onion, celery, carrot, and bay leaf. Cover and simmer 40-45 minutes. Remove the chicken to a platter and keep warm.

Strain the broth and remove any surface fat. Bring the broth to a boil and reduce to 1 and 1/2 cups. Melt the remaining 4 Tablespoons of butter in a saucepan. Stir in the flour and cook for 2-3 minutes. Slowly add the cream and the broth, stirring and simmering until thick and smooth. Add the lemon juice and salt and pepper to taste. Spoon over the chicken and serve.
at January 26, 2014