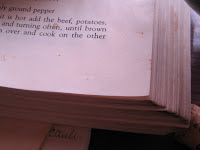 I have a facsimile edition, brought out by Weathervane Books in the 1990s, of the original Boston Cooking School Cookbook first published by Fannie Merritt Farmer in 1896. This is the cookbook that was updated by Marion Cunningham and published as The Fannie Farmer Cookbook in 1983 -- hence, no doubt, a market for the fascimile a few years later -- and Cunningham's edition, by the way, remains the most used cookbook on my shelf. I have had to "re-bind" it with brown paper once, and it needs a re-binding again (it's no use finding another copy on eBay, because this copy was a birthday present the year I got married, is so inscribed, and so has sentimental value). 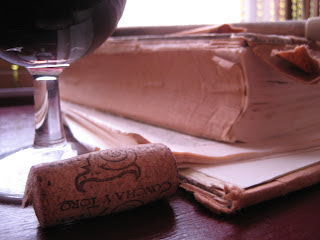 The 1896 edition, while it hasn't proved as useful, is nevertheless fun to look at. Weathervane issued it exactly as it appeared, old-fashioned font, instructions for lighting a coal-burning iron stove, and advertisements for Imperial Granum ("food for dyspeptic delicate infirm and aged persons") intact. At the back of the book there are menu suggestions for breakfasts, luncheons, and dinners, all sounding wonderfully sumptuous and all obviously from the days when even middle-class people had at least one or two servants to help with the work. "Grapefruit -- Wheatlet with sugar and cream -- Beefsteak -- Lyonnaise potatoes -- Twin mountain muffins -- Coffee" ... for breakfast. These were probably also the days when middle-class people still worked hard enough, physically, to burn off all those calories. If you have ever read the Little House on the Prairie books, you know that farmers' meals were even more gargantuan. And Ma worked without servants. 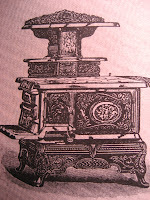 The last five menus in this section are the best of all. One is for Thanksgiving dinner, one is for Christmas, and three are simply "Full Course Dinners." Here I imagine a nineteenth-century wedding, or a great feast in honor of Junior's graduating from Yale. All the uncles sit jovially in a cloud of cigar smoke, and Grandpa's watch chain stretches perilously across his great girth .... Just reading over these menus has become a little five-minute tradition of my own during the winter holidays.

They are similar. Each has its set of ten or twelve courses, each begins with something light and ends in black coffee. Here is Miss Farmer's idea of Thanksgiving:

Only ten courses. Actually, a lot of this meal is what we would consider appetizers and desserts; we simply would not stay sitting at the table as we ate it all. Perhaps families in 1896 did the same.

At any rate, Miss Farmer then moves on to the wine. She is surprisingly brief about it. "Where wines and liquors are served," she begins, but then she simply sketches in basic suggestions, and you have the impression that she is writing for people -- "where wines and liquors are served" -- who already know what goes with what. A Sauternes or other white wine with the first course, sherry with soup, more white wine with fish, claret with game, and champagne with roasts and "other courses." What is a Sauternes, what's a sherry, what is claret? She assumes her readers know.


There's more. "After serving cafe noir in the drawing room, pass pony of brandy for men, sweet liqueur (Chartreuse, Benedictine, or Parfait d'Amour) for women; then Creme de Menthe for all." If you are a time-traveler at this lovely party, you have already drunk four or five wines with dinner. In the drawing room, after a bracer of coffee, you will now have two liqueurs, and Miss Farmer has not mentioned the port that the gentlemen might have had privately after the ladies left the table, nor the aperitifs the whole company might have had even before the butler rang the gong for dinner. When it is all over, "Apollinaris should be passed." That's sparkling water. By this time it must have been quite enough.


And incidentally, a Sauternes is an expensive, luxurious and famed sweet white wine from Bordeaux; a sherry is a fortified wine, either sweet or dry, from the Jerez region of southwestern Spain, near Seville; and a claret is a red Bordeaux -- there are all kinds of possibilities here, and we can only surmise that Miss Farmer meant her readers to serve the best they could afford. 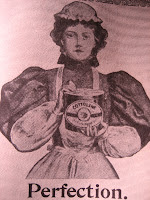