"Grape Harvesters' Soup" comes from Richard Olney's Simple French Food, published in 1974 by Wiley Publishing. The presence of ripe tomatoes would indicate a recipe meant for August or September -- grape harvesting time (without that New World vegetable, it is simply a variation of the many variations of French onion soup). We ate it before a meal of leftovers, but being fresh-tasting, light, and a little tart, it would be a good first course before something really rich like duck or a pork tenderloin. 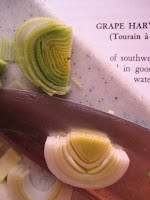 1 and 1/2 lbs. onions, thinly sliced (I used a leek as well);
1/4 cup olive oil;
Salt;
4 cloves garlic, peeled and finely chopped;
3 medium tomatoes, peeled, seeded, and coarsely chopped (I must admit I never peel or seed tomatoes. Once your fresh tomatoes are cooking, you can lift the peel from each one, especially if you only cut them in half to begin with and they have a big outer surface exposed to the heat. No need to chop coarsely -- they will fall apart. As for the seeds, my philosophy is deal with them.)
1/2 teaspoon sugar;
1/2 cup dry white wine;
6 cups water

Cook the onions gently in the olive oil in a large heavy pan, until they are light golden and uniformly soft. Add the salt, garlic, tomatoes, and sugar and continue to cook slowly, stirring occasionally, for another 10 minutes. Add the wine, increase the heat, and reduce by half, stirring, and then add the water. Bring to a boil, and continue simmering, covered, for 45 minutes to an hour. You can float a piece of garlic-rubbed toast in each soupbowl for serving. 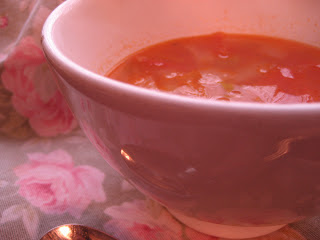 These "Poached pears" come from La Bonne Soupe Cookbook by Jean-Paul Picot and Doris Tobias (Macmillan, 1997). The ingredients are simple: 4 or 5 pears, a lemon, sugar, and wine. 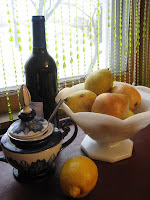 It will take about a week or so for your hard, grocery-store pears to ripen. Peel them (really), cut them in half, and cut away the stringy core. Immerse the halves in a small bowl with water and the juice of half a lemon. Bring 3 cups of wine -- red or white -- to a boil in a heavy-bottomed saucepan along with 1 cup of sugar and a 2-inch slice of lemon peel. Once it boils, keep cooking it over high heat for 5 minutes. Reduce the heat to medium, drain the pears from their lemon-water, and slip them into the hot wine syrup. Cook the pears until they are tender, about 10-12 minutes. Turn off the heat, and let the pears sit and cool in the syrup. They can be served at room temperature or kept in the fridge and served chilled. If you use red wine, after a few days in the fridge they will take on a deep red color. They are especially delicious at room temperature the first day, accompanied by a little scoop of vanilla ice cream. 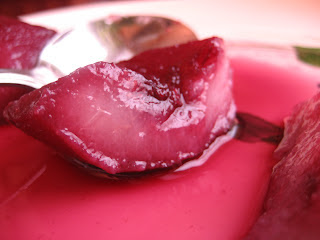