"So does the wine really have blackberries in it?" 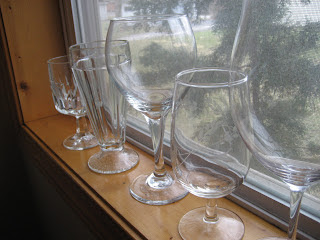 I am currently enjoying, in spots, Lawrence Osborne's The Accidental Connoisseur, published by Farrar Strauss & Giroux in 2004. Although his prose is often lovely, Osborne has written here the kind of highly personal travel book -- for it is essentially a travel book -- that I usually find off-putting. Maybe it's because no editor has ever called me to ask me to write a highly personal book on ____________ (fill in the blank). At any rate, I find travel books of the here's-what-happened-to-me-when-I-met-an-eccentric-character-in-the-Tyrol-after-my-car- broke-down variety tend to move quickly beyond the personal, to the self-absorbed, dare we say the untrustworthy, and the dull.

For all his fine prose, Lawrence Osborne does follow this path in The Accidental Connoisseur. A stay in a decrepit anarchist hostel in Italy ... an interview with Robert Mondavi, in which the coolly observant author, for all his surface humility, treats the subject as a kind of multi-legged monster under a microscope ... the winemaking family, again in Italy, whose matriarch loathes electricity. Sure she does. But he redeems himself, in many spots, with real information about wine, information that can at least be double-checked in other people's books.

One of his best passages comes in the chapter "An Idea of France," in which he traces the development of the wine-tasting vocabulary whose expectations create such a burden for me and, I'll bet, for many new wine drinkers. Up until the 1970s, Osborne says, wines were described very simply in terms of social class and sex. Wines had "breeding" or "finesse," or were "coarse." Wines were masculine -- "assertive" and "big" -- or feminine: "soft," "beguiling." (The French have a masculine and feminine version of a grilled ham-and-cheese sandwich: Croque Monsieur and Croque Madame.)

Then came one Maynard Amerine, and a "landmark 1976 book which changed all that." The attitude of previous authors like Lichine, that "wines were surrogate humans," evaporated, replaced by the insistence on wine as a product identifiable through associations with plants and animals. Indeed, earlier in the book Osborne quotes a European winemaker who laments that wine used to be a mystery and is now a commodity. And Osborne says, because of this landmark 1976 book:

Wines, in other words, were no longer to be seen in terms of a snobby European-style class system; they were to be seen as fresh, democratic, healthy, and natural. In other words, American. The core of the new vocabulary was fruit.

He then goes on to quote a professor of English at Northern Illinois University, Sean Shesgreen, who wrote an article explaining that the "new wine lexicon" happened to be overloaded with the high-sugar, often tropical fruits of the American grocery store and kitchen, especially any and all berries, plus all sorts of spices and other cooking ingredients, plus "bizarre exotica" like leather and smoke, which we are all supposed to be able to detect in our glass now. To this stew has been added the "psychiatric metaphor." Wines are "chewy" or "diffuse" or have "personality." (This reminds me of the wines called Mad Annie, Fat Bastard, Royal Bitch, Happy Camper, or The Prisoner.)

But where does all this leave us, faced with a glass of wine that we want to enjoy properly? Early on in his book, Osborne meets a winemaker who points out that describing a wine as having "lots of red fruit," for example, is a no-brainer. " 'Guess what? Grapes are a red fruit.' " The anxiety to enjoy wine correctly, soothing that anxiety by learning to smell and taste the right red fruit, is the whole theme of Osborne's book. What is taste? Really, who in the world worries about enjoying a steak or fried chicken correctly? He suggests at the end of this passage that the "florid patois" of modern wine descriptions does a disservice to everyone, "bursting with curiosity about our own tastes" but having no way to experience anybody else's and therefore no real points of comparison. All we have is words. Probably awfully silly ones, lately.

I imagine that the words and the anxiety and the silliness are all bundled up together in one phenomenon, and that is that wine has become popular among large populations for whom it was never a normal part of life. Neither the peasant's carafe nor the lord of the manor's cellar casts any shadow over the average American's -- Osborne thinks, the average English-speaker's -- life. Not having grown up with wine, good or bad, we learn from books and experimentation. The point of words, as Jancis Robinson says too, is simply to remember what you liked and what you didn't like, so that you can repeat a pleasure and avoid what was disagreeable.

What is tricky is that a wine can be beautifully made but still taste bad to an inexperienced person. (Or are there wines, Opus One perhaps, that are "all hat and no cattle"?) And that touches our ego: we'd all like to think we have such class, such taste, that we could recognize a fine wine the way we would recognize and enjoy a filet mignon. I have observed that people new to wine love being told that what they are trying and enjoying now is heavy-duty stuff, a "big" cabernet sauvignon or a flinty white. "It would be like a teetotaler liking scotch," the staff says, and the customer postitively purrs. Then again, customers also purr when they stump the staff. "Do you have an Amarone?" "Why no, I'm afraid I've never heard of it." "Really?"

Class, taste, fine-ness. Uncomfortably snooty words crop up already, and as we travel with Lawrence Osborne we were only trying to understand "what I am tasting and why." No wonder that in the last forty years or so we wine newbies have taken refuge in strawberries and things. I may not know wine, or femininity or aristocracy, but I do know what a strawberry tastes like. Maybe as wine becomes more and more a normal part of the English-speaking person's life, we'll be able to stop expecting every bottle to hold a grimly scientific stew, and learn to see the product instead as a mystery, a surrogate human. Really, that's a beguiling image. After all, who peers at his friends and relations, analyzing them for hints of this and that, and then feels puzzled when they are not there?
at January 29, 2014