... because it's summer somewhere.


The wine gods may reserve particular punishments for me on this one, but the more I sample wines, white, red, and in between, the more I conclude that in fact it's those light, refreshing summertime whites that are not necessarily perfect for patio sipping all by themselves. It may be I think this because I am more partial to red wines anyway. Their rich cherry colors and caramel-berry flavors -- not to speak in generalities, of course -- just seem to have vigorous stand-alone personalities in a way that whites do not, at least not always. Some people distressed at what's happening in the wine industry these days would agree and say, but of course: hideously jammy reds, their acids softened with malolactic fermentation, teetering on the brink of port-style alcohol levels, are becoming the uniform cocktail sippers that the (American) market wants.

Another argument lies there, but at any rate I find that a white wine -- a sauvignon blanc filled with grapefruit and lime aromas, a steely German kerner (new to me), a zesty and slightly lemony Spanish airen (also new) -- develop so much more fully when they stand happily next to a meal rather than when alone. After the first few sips, a solitary white is like an acerbic schoolmarm. She is virtuous and clean, brisk and no-nonsense, but needing some company around her. A cat, a geranium, perhaps a nice fireplace or a cozy pot of tea. Something to eat.

My theory on this was recently confirmed when I happened to put together a delightful pairing. This wine, 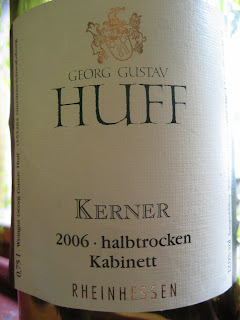 ... that steely dry Kerner (a cross of riesling and the red grape trollinger) new to me, and a recipe for "Salmon-Cucumber Salad" from a vintage cookbook-pamphlet picked up at my favorite antique store in Crown Point, Indiana. Yes, it's that antique store -- the one that supplied the props for the scenes Johnny Depp filmed right across the street, at the old jail, for his upcoming Dillinger movie. So it's almost like I've met him. Anyway the recipe, from the Culinary Arts Institute in Chicago circa 1956, goes like this:

Mix together lightly, chill, and serve. Garnish with melon balls and water cress.

The recipe calls also for the addition of "Creamy Celery-Seed Dressing" at the time of serving, but since this is nothing more than the throwing together of small quantities of ketchup, Worcestershire sauce, and celery seed -- and more msg -- into a mixture of equal parts mayonnaise and sour cream, and sounded ghastly, I omitted to make it.

The marriage of plain salmon salad and the kerner wine was very good. I highly recommend it for a lazy summer holiday weekend.

And I'm a heretic about that, too. Yes, September is still summer. As Dr. George H.T. Kimble pointed out in Our American Weather, another gem of the fifties, September is "one of the loveliest months of the year -- a month which, whether we spend it by seashore or inland lake, bears itself like a gentleman and dresses like a woman in love. It is a month to be embraced, not discarded, lingered over like a vintage wine, not swallowed like a pill." So true. (He also writes that it's senseless to start school in the early heat of September, "when polio is stalking the corridors." The things we forget ....) 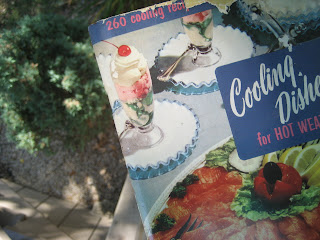 Incidentally, this pleasant little cooking pamphlet must have been written at a time, or for an audience, that found wine unacceptable as a meal time drink. Another recipe, for a dish of lavishly spiced, sweetened, and creamed crab, shrimp, and lobster, stuffed into avocado halves and garnished with fresh tomato and cucumber, is admitted to need -- rather schoolmarmish -- "an equally noble beverage to enhance it -- and what more suitable than full-bodied coffee, poured steaming hot and fragrant over crystal cubes of ice?" 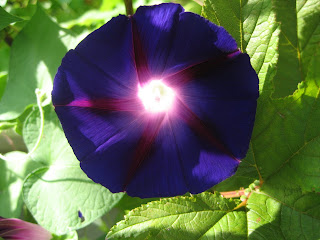