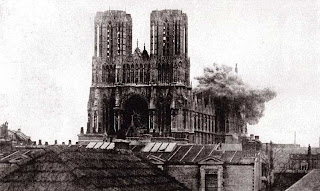 Ninety years ago to the day after the guns of World War I, "the Great War 1914-1918" fell silent -- at the eleventh hour, of the eleventh day, of the eleventh month of 1918 -- the above are a handful of everyday expressions and words dating from that time, which we use without thinking of their origins. To go "over the top," for example, meant to undertake something far more awful than merely to appear extravagant, goofy, or out of control.

Ninety years ago, when the guns fell silent, the toll in European casualties was unbelievable. The Germans and the Russians lost over 1,700,000 men each in battle deaths alone. France lost over 1,300,000 troops; Austria-Hungary over 1,200,000. Britain sacrificed over 900,000 men, Italy 650,000, Turkey 325,000. Civilian deaths at both fronts, in Serbia or in Poland, in Belgium and northern France, are estimated to amount to five million. These figures come from Appendix III to Norman Davies' book Europe (Oxford University Press, 1996). He points out, in tiny print beneath one of the tables, that some of these counts come from "post-war demographic shortfalls," not the actual cataloguing of smashed bodies in the field. A lot of people just disappeared.

This is hideous stuff, and not the sort of information we want to associate with champagne, the wine, in all its froth and joy and celebration. But listen to a wine writer describe Champagne, the land, in France:

The northern edge of the old province touches Belgium, and it includes the departement of the Ardennes, the cool, forested hill country which abuts the frontier. The southern neighbour is Burgundy. To the west lies Paris, to the east, Alsace and Germany. (Champagne by Serena Sutcliffe, Simon and Schuster, 1988).

It begins to sound sinister. She goes on to say that Champagne not only lies thus at the crossroads of western Europe, but also that its flat, open land and the wide valley of its river, the Marne, all make it quite easy of access to invaders. Its capital, Rheims, was captured five times in four fairly recent generations (1814, 1815, 1870, 1914, 1940), and its splendid Gothic cathedral was "virtually destroyed" during World War I. When you read history books on this war you will find that the place names sprinkled about in them, still and forever tinged with eerie melancholy, often belong in lovely Champagne.

And it's not just names in books about this war. Leap back in time 1600 years, and meet, prowling the vulnerable province circa 450 AD, no less a figure than Attila the Hun:

The valour of Attila was always guided by his prudence; and as he foresaw the fatal consequences of a defeat in the heart of Gaul, he repassed the Seine, and expected the enemy in the plains of Chalons, whose smooth and level surface was adapted to the operations of his Scythian cavalry.

This is from the wonderful Edward Gibbon, in his The Decline and Fall of the Roman Empire (Vol. II, chapter XXXV). A quick look at a map will clarify that in Chalons, we are in Champagne. Incidentally, we are a long way from Scythia. The Battle of the Catalaunian Plains, given him here by "the last of the Romans," a general named Aetius, is considered one of those seminal events that prevented the West from being swallowed up by gigantic, slave-like, and always predatory Asia.

Leave Attila and leap forward again: Champagne was also prowled over by (non-Asian) armies of different religions and different nationalities in -- pick a century -- the 1400s, the 1500s, the 1600s. Any thirsty troops could readily drain the cellars of the wineries whose fields they were tromping underfoot, not least of all the cellars of a place like the abbey of Hautvillers, once home to the monk Dom Perignon. The abbey lost 600 barrels at one go, it seems, when one Marshall Turenne was there in the 1650s (Hugh Johnson, Vintage: The Story of Wine). When Russian soldiers were quartered in Rheims in 1814 -- think Napoleon, and all the enemies he made -- an enterprising woman champagne maker decided to appeal to the occupiers' taste by loading up her house's sparkling wine with sugar. The rewards were excellent: the occupiers liked it, took the taste for it home, and soon bottles of Veuve ("widow") Clicquot "became very popular in the land of the Tsars" (Sutcliffe).

What proportion of Champagne's wine making history, dating back two thousand years at least, has been spoiled by war? Did Attila's horsemen also treat themselves to a gulp of something good from the cellars beside the Marne, before abandoning hopes of Europe and commencing that long jog home? And I wonder if it seemed too grotesque for the men signing the armistice in Marshal Foch's railway carriage on November 11, 1918, to drink afterward the wine of joy and celebration. An American in Paris described the delirious happiness of that day.

The streets are crowded and all traffic held up. There are some things, such as this, that never will be reproduced if the world lives a million years. They have taken movies of the crowds, but you can't get sound nor the expression on the people's faces, by watching the pictures.

He doesn't mention champagne, but it does seem that after four years of most unexpected carnage, the public festivities in a victorious capital that day were, shall we say, over the top.
at January 27, 2014