I discovered a new pinot noir at the grocery store which I thought was delicious, and so it became necessary to prepare a dinner to go with it. A pot roast is a heavy dish for warm weather, but as luck would have it our spring has been so cold and rainy that we might almost consider this May to be still "an R month." Or a dead loss, depending on one's mood -- though to be fair the rain has been very encouraging to all that spring greenery.

A pot roast is one of my favorite meals. I start with a two-and-half or three-pound piece of beef chuck, and brown it in olive oil. After browning, I remove it to a plate, and then throw in to sear in the pan some chopped onion, celery, carrot, perhaps a leek, and -- this time -- some sliced mushrooms. It's easy to forget the garlic, but don't forget the garlic. A clove or two, sliced or whole. 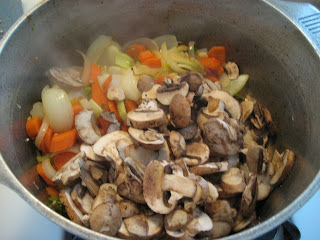 When all these vegetables have begun to soften, I return the meat to the pot. This time, I poured over just a little of the pinot I planned to serve with dinner. 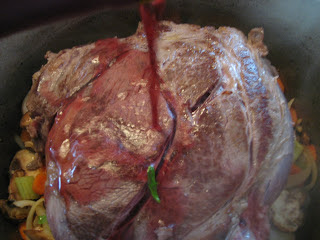 When making a pot roast, it seems to me that you can plan to have the finished product taste either mostly like tomato, mostly like wine, or mostly like beef. It depends on what a recipe might call for, and how you have changed and combined recipes based on your taste and experience. A near-authentic boeuf bourguignon will require two cups or more of red wine, while some old recipes from the '50s are heavy on canned tomatoes or -- rumor has it -- Coke. If you want just a plain beef flavor, you will braise the meat in water, but not too much, and don't forget the salt. More salt than you'd think, as James Beard advised.

I add thyme and basil, fresh or dried, and a bay leaf or two. A clove might be nice, or even a quarter teaspoon allspice. It goes into the oven at 350 for an hour, and then I turn the heat down to about 225 and let the roast simmer in there for at least three or four more hours. When it's done, you have this: 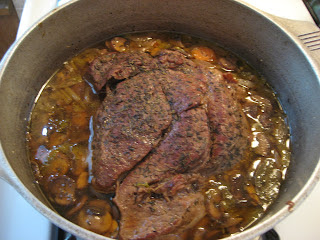 About half an hour before dinner, I remove the pot from the oven, take the meat out of the pot, and bring the accumulated juices to a boil. These I thicken with a cold water-and-flour mixture. 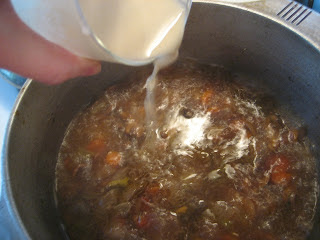 Back the meat goes into the gravy, and back the pot goes into the oven, while the rest of dinner throws itself together somehow and the kids set the table. (They hate that.)

Then we eat. Mashed potatoes and a vegetable of your choice go very well with all this. So did the wine, that Talus vineyards pinot noir that I found at the grocery store. No need to worry whether it had raspberry notes or a structured finish. It was just quite good. ("Quite" in the correct sense, meaning utterly, not more or less, as we use it now. A starchy character in an old Miss Marple novel, I think, explains this difference.) 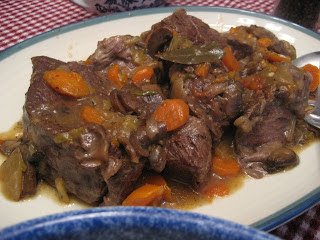 Quite. Is it any wonder that religion found a way to give thanks for food?