This is one of those wines that make you realize, from your first putting your nose over the rim, that the aroma and taste of a few ounces of red grape juice in a clear glass can be very wonderful. Enclosed please find Match Book tempranillo, fragrant with spices and cola, plum skins and cedar. It makes one want to tell a story. 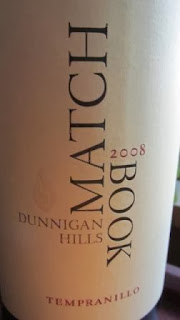 But then, a story about what? Heaven knows. Above, the very early dawn softly lights up the bottle in the window. I snap photos while coffee percolates. I could tell, I suppose, a story about my friend who has suffered a family tragedy abroad, and who now copes at secondhand -- his daughter is navigating the legal system -- with gruesome police reports, notary publics' fees, passport problems, and the copying of eight-hundred-page documents proving and re-proving one's relationship to, and therefore one's right to inherit the property of, the deceased. Because birth certificates can be so easily faked, you see. The copyist wanted a tip for working late.

Stories. Now after we discussed "Queen of the Night beer marketing" and sopranos recently, I ventured forth to my local public library and tried to borrow some good, or even firmly acceptable, biography of Maria Callas. Nothing doing. The library hasn't got one. (What kind of library hasn't got -- ? But we'll leave that, since we already stormed off in a huff.)

I ventured instead to the local Goodwill store, where I found Gladys Denny Schultz' Jenny Lind: The Swedish Nightingale (1962), purged in its turn from the Mackinac Island public library, Mackinac Island, Michigan. The island's loss is my gain: I don't wonder that in a community of 500 year-round residents, interest in a fifty-year-old biography of Jenny Lind is less than nil, but now I get to turn to page 105, and learn of things like the concert in Leipzig. Date: Thursday, December 4, 1845. Venue: the famed Gewandhaus concert hall. Felix Mendelssohn performed, and he summoned Clara Schumann out of the audience to play also. She had traveled from Vienna especially to attend, with no thought of sitting down to the piano herself. To crown all, Jenny Lind sang. Every spectator realized "they had been privileged to witness a legendary musical feast." One of them was a sixteen year old lad who happened to record the event in his diary. He speaks of clutching his ticket all day for fear of losing it, and of the standing room only crowd, and the people overflowing even into "the little room where the buffet is" (Memoir of Madame Jenny Lind-Goldschmidt by Henry Scott Holland, 1891, p. 329). Aha! Now what would have been on the menu there? One imagines, oh I don't know, central European cooking -- herrings, little meatballs, potatoes, sour cream, pastries. Hock (riesling), surely. Probably our timid imaginations do the buffet a severe injustice.

Turn a few pages in Gladys Denny Schultz' biography. Here we find Jenny Lind in the midst of her triumphant London debut. It is May 4, 1847. She will sing Alice in Meyerbeer's Robert le Diable. "H.S. Holland [aha! note the name] recorded that when the curtain rose, 'the excitement was indescribable.' " Small wonder. Not only was it "the Lind's" first role in London, but how could a five-act opera about demonic sex, including a ballet in the third act of nuns' ghosts rising from the grave to seduce the hero, not be exciting? Our poor vulgar shocking celebrities today are such amateurs by comparison. Anyway on page 123 we hear another charming little story. One of the audience bowled over by the Lind was the seventy-eight-year-old hero of Waterloo, the Duke of Wellington. Thereafter, Gladys Denny Schultz writes,


The Duke seldom missed a performance of Jenny's, occupying a box just below that of the Queen, 'like a loyal old watchdog, guarding his mistress,' Chopin remarked. As soon as Jenny appeared on the stage he would rise, bow and ask her ceremoniously how she did. Jenny would bow in her turn, thank him and say she did  very well, after which the performance would go on.

Fancy an opera production today being halted every time the greatest man in the house wishes to greet the prima donna. Of course we wouldn't allow it, perhaps because we have chosen long since to elevate art to fearfully untouchable status, while ruthlessly diminishing heroes. I suspect we're the duller for it.

But we were drinking Match Book. Would Wellington have drunk whatever tempranillo was to hand, I wonder, during the Peninsular war? I should explain that he was in Portugal and Spain then, the Iberian peninsula, fighting Napoleon's armies, and the tempranillo grape is Spanish. Perhaps a clay jug at some little rustic inn, and the hero in his dirty boots and cloak, surrounded by attachés and studying a map by candlelight ... this would have been forty years before he stopped operas to salute Jenny Lind. It would have been a good fifteen years before she was born.

Stories ... I do try fiction myself, sometimes, but when I revisit my own things I always find them clunky and didactic, perfect monuments to what I should not be doing. I had better stick to telling you what Gladys said about Jenny. Meanwhile, a thunderstorm complete with tornado warnings and blaring distant sirens has gone by, leaving just raging warm winds, clearing skies, and eerily spring-green grass strewn with yellow leaves in the sun. Even the trees, with their last foliage still clinging on, oddly recall the new growth of March or April. It isn't.
at January 11, 2014