The retro art! The men in straw boaters, à la Maurice Chevalier! That deep French (or rather perhaps Flemish) blue! 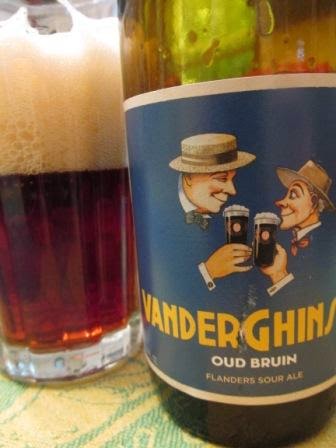 And that delicious taste. We know how we love sours. VanderGhinste ranks right up there with our favorites, the Duchesse and Ichtegem's, which is now hard to find.

Now my fatheads, I have just finished a three year project, writing, polishing and re-polishing my memoir/novel, so you must pardon me if I use Pluot, at least for a while, as an excuse to relax a bit and still write, but perhaps polish less. There above, you have your sour to enjoy; and what else?

Quite a while ago, some nice people at a p.r. firm sent me a copy of Adam Rogers' new book, Proof: The Science of Booze (Houghton Mifflin, 2014). It's full of good information and interesting stories from his travels in the researching of booze, and I especially like the organization. The eight chapters take us right through the making and ingesting of drink, from microbes up, "Yeast," "Sugar," "Fermentation," "Aging," etc., all the way to chapter 8, "Hangover." What I find difficult about it is the style. It's written in very conversational, abbreviated guy-magazine talk, into which old-fashioned prose formality still creeps from time to time. All of it becomes halting and distracting. "That'll be where we go next," "what'd be the difference if it did?" and so on. But if you are going to use constructions like that in a book, I suppose for the sake of hipness and accessibility, why not maintain them? He jumps from "would've" and "it'd" in one sentence to something like "it would not have been the first time that" in the next. Shouldn't macho hipness and accessibility in language be good all the way through?

So I would suggest you want Proof as something to consult, not to savor. Full disclosure: I must admit that for me a little chemistry goes a very long way. My gentleman friend would probably roll his eyes and sum up. "You females like your romance novels, don't you."

What else? We've been through this before somewhat, but the new opera season is starting and I have also surfed a bit on the station's "Chime In" comment board and so have seen the way people unburden themselves of their opinions there, so we'll revisit the issue --

-- I have a sort of love-hate relationship with our legendary local classical radio station, WFMT. I love the fact that it exists, that it educates me and often plays nice things; I hate the fact that, for example, its potentially most interesting program, "Exploring Good Music" with Bill McGlaughlin, is hosted by a man whose "dese dem 'n' dose" diction should drive anyone to madness ("an' den Bayd'ven wrote a sym'fny, over by dere"). I furthermore hate the fact that so much of its late-night programming is so awful. After 10 p.m. is precisely when I want WFMT to lull me to sleep with nice things, harpsichords mostly. And yet, on four or five nights out of seven, 10 p.m. is precisely when the station chooses to be awful. Monday is "Critical Thinking with A---- P------" (liberals, nattering). Wednesday is all about the Chicago record company Cedille, which might be all right as a subject except this hour, too, seems to involve little else but liberals nattering. Friday: hoary rebroadcasts of Studs Terkel -- more "dese dem 'n' dose" diction, and liberals, nattering. Saturday is folk music: liberals nattering.

This leaves only Thursday as our prime hope for good late night music, followed by the smaller hope of Tuesday. Thursday gives us "The Baroque and Before," usually sheer delight, and Tuesday gives us the Tuesday Night Opera. Sometimes this is screechy -- to this day my son, who sleeps in the bedroom next door, remembers the time he couldn't get any peace for an hour because the opera was a very early and awkward Verdi -- but sometimes it is Handel. (We have forgotten to finish the tally of our nights of musical hope from WFMT. Last of all is Sunday's 10 p.m. "Pipe Dreams" and its organ music. We can't count it, because it's simply strange beyond reckoning. That people go to churches and applaud what sounds like one-dimensional calliope or baseball park thundering is fascinating in itself. We wouldn't even know they did so, except that "Pipe Dreams" always seems to play live concert recordings, from churches, where the people clap sacrilegiously after the organist is done.)

At any rate it happens that on a recent Tuesday, the opera was Handel. Rinaldo. Lovely and pleasant. Some weeks ago, sometime in August, it was Vivaldi. Griselda. Also lovely and pleasant. And, yes, full disclosure, I did fall right asleep both times.

However, I did also rush to YouTube the next afternoon to look up Handel and listen to whatever I might find. Can there be anything more lovely than Joyce DiDonato singing "Dopo notte" (after night), from an opera called Ariodante? Or, than Ann Hallenberg singing Rinaldo's "Laschia ch'io pianga" (let me weep)? We must have more operas in which medieval Crusader princesses resort beautifully to prayer after being abducted by an evil sorceress. I even bought a CD of Joyce DiDonato's Furore, to play in the car. ...a bit screechy.

Now company has arrived for a visit, so I must go.


VanderGhinste oud bruin, retail, about $5 for a 12 ounce bottle.

Navan, or -- "you need to start being more shy"

Since in a few minutes we are going to try a Navan sour -- a cocktail made with Navan, a vanilla-infused liqueur that the Grand Marnier people no longer produce -- it seems appropriate to have a little discussion about retiring things.

My daughter and I were having this talk the other day. She happens to be the youngest and newest hire at her workplace, but is also tagged as "acting manager" when the manager is not around. The air quotes are put in for a reason, because her "title" causes problems. Surely no normal twenty-two-year-old enjoys telling fifty-year-olds what to do, just for a start. And it's not easy for the personality type uncomfortable with do this and go thither to say those words. The difficulties are compounded when everyone knows so much of the thither to be commanded is unworkable and silly.

I said to her that her situation reminds me of my years teaching Sunday school. Just as her co-workers know that going out "prospecting" -- accosting innocents at the spa, dunning them to sign up for more services -- causes clients to flee in impatience, so my students and their parents knew perfectly well that Sunday school was fake school. Yet, in both those situations, if you as the authority figure don't carry on smiling and enforcing the pursuit of fake work, pretty soon nail techs are lounging around your desk gossiping instead of prospecting, or nine-year-olds are ignoring you. Pretty soon you have people above you saying, "you need to be more assertive."

Upon hearing this the retiring person unsheathes, at least mentally, that sword he will likely never use. You'd like me to be more assertive? Really? As in, get away from my desk and go find clients, it will help you run off some of those extra pounds? As in, fake school or no, if your home life were different I don't think we would be seeing these behavioral problems? .

Oh, of course not. That would be going too far. People who ask the reticent to be more assertive always have rules about it, unspoken shape-shifting rules, which they don't dream of obeying because aggression comes so naturally to them anyway. They don't need guidelines. And it's very curious that no one ever seems to ask the bumptious to change their personalities, except perhaps in school, which is just exactly when everybody has one thing in common. We're all children then. After that the world seems to throw up its collective hands at the bumptious, and leave them to the coercion of law and other forces. Or the world politely marvels: "such a strong person." Anyway while a teacher may say "quiet down" she doesn't dream of telling some six-year-old, no one ever tells any adult either in that flat judgmental way, "You need to start being more shy."

There is no answer for it, I suppose. The quiet and the slaveringly pushy must simply reconcile themselves to sharing the same planet. The pushy rush about founding charitable non-profits and not taking no for an answer when someone does not care to attend an event -- say, the annual golf outing and shrimp boil. "It's so much fun! I'll call you again in a few days." The quiet remember Marcus Aurelius' injunction to live for the gods, and stealthily write everything down.

We mentioned the liqueur Navan at the outset. I unearthed a tiny sample bottle in the back room the other day, peered anxiously at the difficult-to-read label, identified it as a cognac and decided to take it home and try making a sour with it. It's all right to attempt cognac sours, our master Charles Schumann allows it in his American Bar.

Out came the mixing cup, the dab of sugar, the half lemon, the lemon juicer, the cocktail glass, the barspoon and the tray of ice cubes. The little sample bottle was of course the perfect jigger, as sample or "airplane" sized bottles tend to be. I measured, squeezed, mixed, dropped in the jingling ice and stirred and poured. And the sweet, sweet vanilla, wood-like and faintly smoky aftertaste of a Navan sour reminded me exactly of the smell of my local liquor store. This is not a slur, only a description. Every time I push open the door of this place, to toddle in and buy my inexpensive and delightful bottle of rum to make my real after-work sours, I sniff the same smothering aroma. The fresh air of the outside world rushes away behind me and I am enveloped in the scent perhaps of a few old cigarettes, but mostly of -- what? I am not sure still, but the smell calls to mind stacks and stacks of old wooden liquor crates, soaked in vanilla and sitting in the back room for years. And now, it calls to mind Navan.

Navan was once made by Grand Marnier. Flavored with Madagascar vanilla, it was produced for a few years in the early 2000s and then discontinued when its sales did not please. I gather the complaint about it was too sweet. (It must be frustrating to develop sweet liquor products for the sweet-loving American market and then find out you've, inexplicably, gone too far.) ...the retiring tend to be that, too. 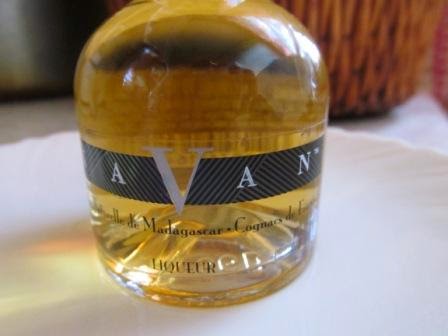