True story: when I first published this post, I called it "OMG -- fettucine Alfredo," in reference to all the butter and cream. At the time I was a part of the BlogHer network. An editor told me she wanted to feature the post in the food and drink channel, but BlogHer had a policy not to have anything to do with religion, so would I please change the title. I couldn't understand this at first. Was there a Saint Alfredo whom I could be perceived as mocking? Then I realized. It was the G in "OMG" that was the problem.

Oooh. Yesterday evening it was getting to be 3:30 and then close to 4:00 and I asked my daughter -- she happened to be loitering in the kitchen -- "who's got dinner ideas?" I laid out my usual joke stipulations, which I drag out when it's getting to be 3:30 and 4:00 and the time to make something fancy and complicated is past for the day. "It has to be quick, easy, delicious, new, exciting, unusual, and cheap -- I mean, inexpensive." She hemmed and hawed and then said, "Fettucine Alfredo."

I said, "Ooooh. What a good idea." It is quick, easy, delicious, inexpensive, and if not exactly new, it is sort of unusual to us because we are a family with both a lactose intolerance problem and a gluten allergy problem, and so I haven't made Fettucine Alfredo -- all cream, butter, and noodles -- in a long time. I was excited.

"But what will Dad and E---- eat?" she asked. I paused and considered. "They'll think of something," I said cruelly. (Luckily they both like a treat of Chinese carryout now and then.) And I went to the store, bought the handful of ingredients needed and a bottle of wine, came home, and set to work.

The recipe comes from Marion Cunningham's 1986 revision of the Fannie Farmer Cookbook, and yes, it begins with a half pound of butter (you will boil a pound of fettucine). While the butter begins to melt over a low fire, add two cups -- yes -- of heavy cream. Warm and melt it all together gently and thoroughly. If a Cub Scout den leader rings the doorbell meantime to deliver the popcorn you ordered two months ago, well, don't forget while you are handing over the money and asking him What's New, that you've got a very quick dinner cooking on the stove. Maybe he'll notice.

While the noodles and butter and cream sauce are each in preparation, grate some fresh Parmesan cheese. A cup and a half of it. Yes. (This is the dish once famously dismissed as a Heart Attack on a Plate, isn't it.)

When the noodles are done, drain them and combine them with the butter-and-cream and the cheese. 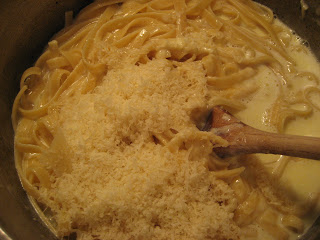 A bit of salt and pepper, an extra grating of cheese per person if desired, and dinner is served. The pile of fresh boiled spinach on the plate is meant to be a kind of tasty talisman against all that fat. 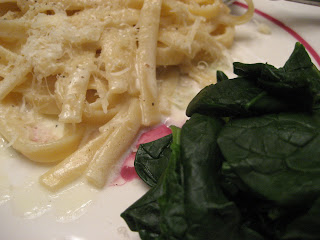 And OMG, is it good. The wine, also meant to be a tasty, red, resveratrol-laden talisman against all that fat, was an inexpensive Chianti from Bolla. I like Chiantis. They have a gorgeous, cranberry-jewel color, and a unique flavor that combines tart-sweet raspberries, briny green olives, and something piquant, something leathery or almost horsy. In a good way.

Marion Cunningham says that the Italians would serve this as a first course. For us, it was dinner. What on earth could follow it, and not seem anti-climactic?
at January 27, 2014