Yesterday I had an interesting conversation with a customer at the wine shop. This was a middle-aged gentleman, originally from India, who said among other things that his grandmother would spin in her grave if she could see him drinking wine. He also said that all religions forbid alcohol because it is not necessary for, and in fact interferes with, spiritual growth, the practice of any kind of meditation, and closeness to God.

Now I had to (affably) take issue with him on the pronouncement that all religions forbid alcohol. Jews usher in every Sabbath, for one thing, with wine, and re-creating Jesus' Last Supper with ceremonial bread and wine is the heart of Christian liturgy. In antiquity, wine was so sacred and so miraculous that the Greeks believed that in drinking it, one drank the blood of Dionysus, the wine god himself. His rituals were weird and exciting, half-understood, apparently often grotesquely violent (and possibly fueled by narcotics, apart from wine); in the book Vintage Hugh Johnson traces Dionysus' worship from the very ancient East to Greece to Rome, and offers as one of its lessons "the truism that wine is a blessing in moderation, and a curse in excess." This seems to approach what my customer was saying: that religion, all of it he thinks, shies away from alcohol because it is a product that can lead to loss of control and, I suppose, loss of God-given human dignity.

His contention that wine doesn't bring one any closer to God, however, puzzled me. How is that wine's job now? He elaborated by saying he felt sure the Pope, for example, does not drink wine with his meals as a regular thing. The Pope is so far advanced in spiritual matters, my friend implied, that he would hardly tolerate so pointless a thing as a glass of wine at his table.

I would have taken issue with this, too, except that a) I'm a coward and b) there's no point arguing with a customer too much. But why would the Pope not enjoy wine with his meals? He's a European, a German, from a land of glorious wine and winemaking traditions. My friend's assumption that wine has small purpose apart from, is even by its very nature in competition with, spiritual concentration struck me as pouring far too great a burden into the glass. Given that we all don't go up into the mountains and tear men's heads off in honor of Dionysus anymore, isn't wine just a healthful and tasty pleasure?

In any case, my customer's linking of alcohol, the divine, and taboo did make me think about those two poles of human experience, pleasure and (often religious) duty. Jews sanctify wine, but follow kosher laws which, in all their strictness, do put out of bounds a great many foods and food combinations which seem to me just innocent pleasures that need not have been quite so thoroughly forbidden. And a careful reading of the Bible will show that health was never the rationale for them. Indeed, why not forbid wine? Muhammad did. It may have been sheer luck that Moses did not.

Of course, to a devout person, these things are not luck, they are divine law and are to be rejoiced in, not altered by human whim or human temerity. Christians forbid nothing that I know of in the realm of comestibles, but traditionally include in the liturgical year some sort of limits to what can be eaten and when: meatless Fridays, Lenten sacrifices. Hindus forbid beef; my customer of yesterday said he had been a vegetarian all his life, as many Indians are. Here is a man who has never eaten a roast chicken, a steak, a filet of grilled salmon. I look at all the religious taboos on good things to eat and drink, and I consider -- another truism -- how short life is, and that each of us only gets one. And I wonder if human beings were ever right in their notions that somehow, denial of gustatory pleasure pleases God. 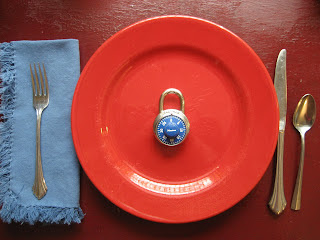 I suppose once again devout people would point to the inexplicable-ness of divine revelation, and would further say that it would have been always salutary anyway for people to impose some sort of control on human appetites. Perhaps. But the control imposed on you or me can often be such a matter of luck. Born Muslim, and stay obedient, and you will be denied wine and pork. Born Jewish, you will be denied pork, shellfish, and the mixing of meat and dairy. Born Hindu, you will be denied beef. Why is there no divine revelation forbidding lamb or chocolate specifically, or insisting -- why not? -- that one must eat cat? And of course, there is no end to what you may deny yourself, not least of all by religious conversion. Even apart from that, there can be the denial of fat or sugar or caffeine or carbs, for the sake of health or to help in what I believe the English used to call "banting" (dieting). I have read that some people even embrace a gluten-free diet, willingly. This is a doozy of a choice for which I have no respect, because I live in a family with a serious gluten allergy: for us, avoiding bread, noodles, pie, crackers, cake, cookies, and everything else made of wheat is necessary and permanent. We can't change our mind about it if it gets tiresome, or if dieticians' advice for the average healthy person changes.

At the end of her book How To Cook a Wolf, M.F.K. Fisher wrote something that would most likely outrage a religious person. It will be easy to spot:

...since we must eat to live, we might as well do it with both grace and gusto. ...I cannot count the good people I know who, to my mind, would be even better if they bent their spirits to the study of their own hungers. There are too many of us, otherwise in proper focus, who feel an impatience for the demands of our bodies, and who try throughout our whole lives, none too successfully, to deafen ourselves to the voices of our various hungers. Some stuff the wax of religious solace in our ears. Others practice a Spartan if somewhat pretentious disinterest in the pleasures of the flesh .... I believe that one of the most dignified ways we are capable of, to assert and then reassert our dignity in the face of poverty and war's fears and pains, is to nourish ourselves with all possible skill, delicacy, and ever-increasing enjoyment.

Somewhere in one of his books, The Importance of Living I think, Lin Yutang wrote that Chinese civilization is so old that it has learned to abandon all the "blind alleys" that younger cultures explore, alleys leading to abstractions like political ambition, grand social betterment schemes and frankly, religion's dwelling upon ritual, sin, theology, and taboo. China, he wrote, loved instead simply being human, eating, drinking, looking at the moon with pretty women, planting vegetable gardens, and so on. Like M.F.K. Fisher, he seems to be saying that in the quarrel, if there is one, between pleasing the body that God created hungry, and pleasing the God who also mysteriously forbids selected pleasures, really pleasing the body ought to win out. Here the body is, after all; it is going to get fed, or die; why should the feeding be a penance? God doesn't eat or drink. We do.

It is odd that sensual pleasure, not riot or dissipation but just pleasure, should be such a threat to holiness, but my wine shop customer seemed to sense that it is, and Fisher seems to and Lin Yutang, on behalf of all China, seems to also. Did the prophets also sense it, and is that why it was revealed to them to forbid things? Perhaps the Greeks were wiser to try to co-opt it, and call it Dionysus the god.

Then, on a lighter note, there is the quite scary chef Anthony Bourdain, who in Kitchen Confidential doesn't philosophize but merely gives the back of his hand to anybody with any food or drink dislikes at all, regardless of the reason. Lactose intolerance does not impress him, and as for vegetarians, "and their Hezbollah-like splinter faction, the vegans ... they are the enemy of everything good and decent in the human spirit, an affront to all I stand for, the pure enjoyment of food." He is in the same corner with Fisher and Yutang, and I think, me. The human corner, if I may call it that, although religion is human too. (Delicious paradox.) All three repeat that word in their encomiums to food -- human, human, human.

Of course, Chef Bourdain did go on to film a TV show in which he traveled the world and managed, if I am not mistaken, to find a reason to eat raw, freshly harvested monkey brains. If I were God, that would be forbidden. Don't ask me why.