Almost as luscious as great food photography is great food writing. Sometimes you encounter it, at its best, not in cookbooks but in novels. Maybe that's because the novelist's perspective -- or the characters' -- is not that of the professional who is going to cook, but the ordinary soul who is going to eat.

Some of my favorite food scenes occur in novels I read at about junior high school age. Here is the simplicity of bread and water, from L. Frank Baum's The Wizard of Oz:

When Dorothy was left alone she began to feel hungry. So she went to the cupboard and cut herself some bread, which she spread with butter. She gave some to Toto, and taking a pail from the shelf she carried it down to the little brook and filled it with clear, sparkling water. Toto ran over to the trees and began to bark at the birds sitting there. Dorothy went to get him, and saw such delicious fruit hanging from the branches that she gathered some of it, finding it just what she wanted to help out her breakfast.

Then, a real seaside clambake from Louise Fitzhugh's (wonderful, wonderful) The Long Secret:

Mr. Welsch had taken the tarpaulin off, and with the aid of tongs, was heaping things into baskets as he got down through each layer. First there was corn, steamed in the husks. Harriet grabbed an ear, burned her fingers, and dropped it, screaming. "Wait," said Mrs. Welsch. "Just wait."

Then came a layer of steamed clams, then a layer of mussels, more corn, and then the lobsters. They could hardly wait until it was all piled high on their plates. There was a big pot of melted butter, which Mrs. Welsch divided into cups for each of them. They all sat around on logs and rocks, dipping the lobster meat, the clams, the mussels, and covering their faces with butter and grins. Everything had a marvelous smooth, smoky taste ....

As we move on to the sophisticated meals of another junior high favorite, Gone With The Wind, we begin to encounter dishes that might have been washed down with a glass of wine. Here Scarlett O'Hara, barely surviving at a ruined Tara in the last months of the Civil War, remembers delicious food from her girlhood:

...her memory would rush back to the old days, the meals of the old days, the candle-lit table and the food perfuming the air. How careless they had been of food then, what prodigal waste! Rolls, corn muffins, biscuit and waffles, dripping butter, all at one meal. Ham at one end of the table and fried chicken at the other, collards swimming richly in pot liquor iridescent with grease, snap beans in mountains on brightly flowered porcelain, fried squash, stewed okra, carrots in cream sauce thick enough to cut. And three desserts, so everyone might have his choice, chocolate layer cake, vanilla blanc mange and pound cake topped with sweet whipped cream. The memory of those savory meals had the power to bring tears to her eyes as death and war had failed to do ....

But we don't know what she and her family drank with those savory meals, until later in the book when she is honeymooning with Rhett Butler in New Orleans.

The wines and liqueurs and champagnes of New Orleans were new and exhilarating to her, acquainted with only homemade blackberry and scuppernong vintages and Aunt Pitty's "swoon" brandy; but oh, the food Rhett ordered! Best of all things in New Orleans was the food .... Gumboes and shrimp Creole, doves in wine and oysters in crumbly patties full of creamy sauce, mushrooms and sweetbreads and turkey livers, fish baked cunningly in oiled paper and limes. 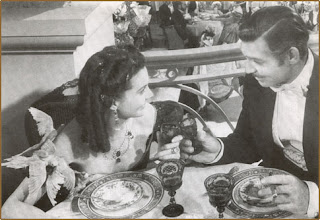 Blackberry wine is something I have not had the pleasure of tasting, nor scuppernong for that matter, but scuppernong would be a wine made from the scuppernong grape, one of the vitis labrusca species native to North America. Native, as vitis vinifera with all its noble chardonnays, pinots, and cabernets, most definitely is not. If Scarlett were depicted as a refined 19th-century lady, as she also most definitely is not, she would have known enough to drink the wines that writers like Fannie Farmer and Florence Howe Hall, or the very British Mrs. Beeton, simply hint at: with each dinner the usual round of sherry, Sauternes, and claret. Reading Gone With the Wind, you get the impression that her saintly mother Ellen O'Hara, and Melanie Wilkes, too, would have known to put these wines on their tables; Scarlett and her father, and maybe the madam Belle Watling, would have grabbed for the scuppernong -- or better yet, the brandy.

I have found that the subject of wine grows more interesting as it exposes me to more knowledge about and appreciation of food, and vice versa. I happen to work in a wine shop which has big placards above the shelves, suggesting what foods will go well with what wines. So I am surrounded at work all day by something that I like, and that is prose food. "Pasta" and "cream sauces" show up more than once, as does "beef" and "seafood" and "chicken" and "salads" and any other category of comestibles you can imagine. When I get home, I'm ready for a meal, and I'm ready to try some wine. Lots of different wines might be a good match with lots of different meals, so wine can make each meal, even the simplest, a new creation. The anticipation of a meal as an unfamiliar pleasure becomes a new grace in life, a grace made possible by wine. That's how you get into it. Another cup of coffee, another diet Coke, is like a stop sign sitting on the table in front of you as you eat. It will not make your sandwich, or your plate of buttered noodles with fresh chopped tomatoes and parmesan cheese, taste any better today than yesterday. Or the day before that.

Wine is a different experience, however, in the movie Sideways, the only movie I know of that is about wine. In Sideways, wine geek Miles asks his lady love, Maya, "what bottle did it" for her -- what experience of what wine made her, previously a newbie, fascinated with the subject. She replies with an obscure but, to professionals, devastatingly perfect example: "an '88 Sassicaia." Miles understands. This is an Italian cabernet sauvignon, by the way, new since the 1970s.

Maya's answer implies that an appreciation for wine is not something that grows on you along with the appreciation for food (whether prose or real) that it also encourages, but is rather something that bowls you over in isolation: you happen by mere chance to taste a divine glass, and immediately you decide "I must and shall love and know this forever." I think Miles' wine-geek attitude sets the bar awfully high -- come to think of it, it's the creating of an artificial bar to enjoying wine. What if you never happen to try that overwhelming vintage? Can't you also get into wine if you just pick up a $5.99 bottle of riesling for curiosity's sake? If Miles were to ask me his question, I would have to fumfer around and say, oh well, no particular bottle did it for me. I was laid off from my other job and luckily the wine shop in this pretty little neighborhood was hiring, and then I always liked that clambake scene in The Long Secret ....

And what wine goes with a clambake? Fannie Farmer and Mrs. Beeton would have equated fish with Sauternes, unless they simply drew their skirts aside in horror at the thought of a lowly clambake at all. I think I'd pick a nice riesling.
at January 29, 2014