A plea for screwcaps 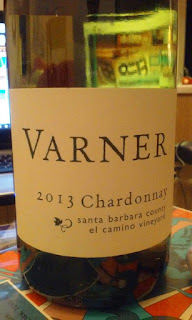 Please. I'm sure it would be lovely. Light, crisp, refined, satiny, the most perfect, gleaming eau-de-Nil color imaginable, if eau-de-Nil could be faintest silver gold instead of greenish gray (which it is).

Please. A twenty-five dollar investment. A treat. Four glasses possible. Two evenings' pleasure spoiled, and what if I had opened it for company? Who wants to taste stale moldy books and wet basement? No cheese could overpower this, and why ruin even a piece of leftover salmon by trying to pretend it's all right?

Please. No one, I can promise you, no one is planning to cellar a $25 California chardonnay for eight to ten years. No one needs the cork for that purpose.

Please, dear Varner, next time use a screw cap closure. I could try the plastic-wrap-cure, but I've tried it before and I don't think the molecule 2,4,6 trichloroanisole really sticks to Saran wrap.

Still think screwcaps are too downmarket for good wine? But what were the odds that my bottle would be "corked"? Only five percent, the books say. Only when it's the wine I bought, the odds are one in one.

Wouldn't you know it 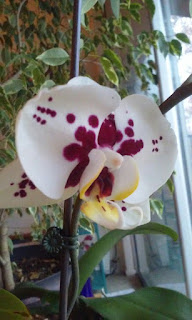 Wouldn't you know it! (This is to let you know I am still alive. Three weeks is a longish time.)

Wouldn't you know it, I no sooner turn off my electric fan in the middle of the night, because I am tired of hearing it thrum and I think I can detect soft noises as it were underneath that sound, which might be the carol of spring robins, which I do want to hear -- no sooner do I do this, than in the new hush I realize: oh no. It is the noisy neighbors after all. They had been blessedly quiet for a long time. I can hear their t.v. going, quietly, through my bedroom wall and I can hear the occasional hoot of laughter. There was a heavy thud against the wall, as of a teenager's head hitting it as he rocked backward. Wouldn't you know it, I muttered to the cats, and got up and switched the fan back on.

Last summer, this sort of thing was far worse, which is why I complained to the neighbors and to management, and got in the habit of turning my fan on just for the white noise all night, all fall and winter. One day I'll tell you the story of how I went out in my white robe at 2 am and simply stood on my balcony and stared at them in fury, the five of them who had been blithely chatting and laughing and shouting over each other when they got enthusiastic about their stories, in the dead quiet of a summer night while the brick buildings of the courtyard reflected sound back like I don't know what. They each looked at each other sheepishly one by one and then at me. One by one they trudged inside their apartment. ("Oh my God," my co-worker Anthony said, looking at me rather wall-eyed, when I regaled him with the story. "If you were my neighbor lady, that would totally creep me out.") That night I had been awakened by a slapping sound, and had been dreaming that a little girl was running in the courtyard in her flip flops, late for school. When I awoke fully and looked at the clock and saw 2 A.M., I realized it couldn't be that.

Months later, while eating my lunch in the breakroom at work, I heard that same slapping sound. I looked up to see another young co-worker slapping his package of cigarettes against the palm of his hand as he headed outside for a smoke. "That's what it was!" I almost yelled after him, but I didn't because it would have entailed long explanations that the poor young man would have had to be polite about when he just wanted to go. I had already told the apartment complex managers the story of my dream when I was still mad.

And by the way I've learned what pot smells like, too, thanks to my neighbors on the balcony and through the bedroom wall. When I first moved in and began to enjoy the balcony and the magnolia tree and the big open windows and everything, I thought more than once, "how many skunks can there be in this courtyard at night, feeling threatened enough to spray so often?" Then someone suggested pot and I understood. ("When your neighbors go out on the balcony, do they cough?" Anthony asked. "Yes!" "That's weed," he nodded.) Now I can recognize it anywhere. It's surprising how many people reek of it -- even softly -- just out in public. Even filling out job applications.

I've also got a second orchid to bloom. This is phalaenopsis I believe, moth orchid; the usual supermarket, beginner's species. 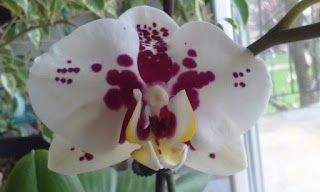 And I've met the novelist Barbara Pym, in her first book, Some Tame Gazelle (1950). I like this:


The trivial round, the common task -- did it furnish quite all we needed to ask? Had Keble really understood? Sometimes one almost doubted it. Belinda imagined him writing the lines in a Gothic study, panelled in pitch-pine and well dusted that morning by an efficient servant. Not at all the same thing as standing at the sink with aching back and hands plunged into the washing up water.


"Keble" is John Keble, 1792-1866, Anglican priest, intellectual, hymnwriter and all around gentle soul. We first heard reference to the " 'daily round -- the common task' " in Mapp and Lucia, when the Padre encourages all to buck up in the face of the tragedy of Elizabeth's and Lucia's having been swept out to sea on the kitchen table, and so apparently lost forever.
at April 07, 2016 No comments: