A one-and-a-half liter bottle, in the grocery store sale cart for $6.50 -- and beyond that, a Sutter Home Zinfandel -- qualifies, I think, as a "jug" wine. 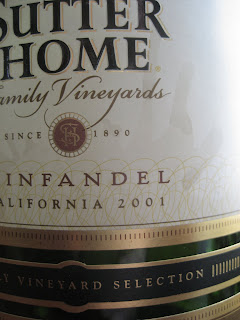 Not only was it essentially a jug, it was an old jug. Vintage 2001. Would it, I wondered, show the characteristics of having aged in the bottle, as a wine of real class would do?

Amazingly enough, it did. I don't suggest that this bottle was anything to render Chateau Latour '61 ridiculous, but it had aged. Its color bore that telltale brownish tinge, instead of being entirely the mulberry purple of a young wine, and its aromas were no longer of barbecue sauce or strawberries or red apple skins, but of brine (think olive juice) and prunes and raisins, a little port-like even. It retained some acidity, but those mouth-shriveling tannins (think plain black tea) seemed to me almost gone -- it flowed down the throat much "thinner," and more "drinkable" I suppose, than the freshly released zinfandels which often resemble gulps of liquid cinnamon cake.

The wine, therefore, had done what good wines first began to do when they met the happy, combined inventions of the glass bottle and the cork stopper in the seventeenth century; it had done, on a grocery store shelf, what fine Bordeaux, Burgundies, and rieslings are laid down in cool cellars to do. And it's Sutter Home. These are the people whose success appalls wine world professionals (see a fairly recent post from Vinography on "the truth about American wine drinking"). Sutter Home are the people who invented white zinfandel.

So I take this wine's humble quality, so to speak, as a small piece of evidence in support of the view of some wine writers, that there is more good basic wine being produced now than our vinegar-swilling ancestors could have dreamed of. Very fine wine will always be in a different category, all small production and tiny yields and centuries of experience with the terroir and every grape a bursting jewel of flavor in those expensive little French oak barrels, but still, nothing more than good grapes and sound winemaking went into this eight-year-old bottle of Sutter Home Zin. Also nothing less. For $6.50 per 1.5 liters, we're the ones who benefit, when we want something nice to go with dinner.

And speaking of quality, an aside: the American Wine Blog Awards have been announced! Congratulations to all the winners. I had the cheek to nominate myself for Best Writing on a Wine Blog, but I, alas, was not picked as a finalist. From the pool of finalists in all categories, the winners are:

Tom Wark at Fermentation invented these awards three years ago, and next year will hand off ownership of and responsibility for them to one of their current sponsors, the Open Wine Consortium. I do think that next year, someone in charge of these things should have the cheek to create a category just for, um, Best Wine Blog by someone with less than twenty years' experience in the industry who lives in the suburbs and generally buys wine of $8 or less -- the Sutter Home price level that appalls the professionals -- per bottle. People start wine blogs every day, think how big and competitive and exciting that category would be. I probably wouldn't stand a chance in it.
at January 26, 2014

Email ThisBlogThis!Share to TwitterShare to FacebookShare to Pinterest
Labels: reds