Wine in the coming Ice Age

When I was growing up -- think the Nixon-Ford-Carter-Reagan years -- I seem to remember that the Russian newspaper Pravda was understood to be a laughing stock. Of course, it was a mouthpiece of the Soviet state, and so its articles were only quoted in the American press as examples of official Soviet whitewashing of domestic problems, or conversely of the trumpeting of faux Soviet triumphs in this international sphere or that.

Today, while the newspaper's American equivalent, The New York Times, is something of joke in itself, you can go on-line and look at Pravda in English. It carries in its sidebars the kind of things that would probably have done its '70s ancestor proud: pictures of gorgeous Russian models next to teasers for breaking news about useless American weapons systems, for example. A few weeks ago, however, it carried a story on a very topical subject which seemed to be based on good science. I lack the credentials to say what constitutes good science, so I should rephrase. It carried a story based on scientific information that I had never heard of before, which seemed plausible, and whose effects I or anyone can see repeated in daily life. It was also science referenced largely from British and American journals, if that helps.

The three-page piece was all about the coming ice age. If you grew up when I did, you might remember that that phrase was once bandied about in capital letters. Pundits, and maybe even people, genuinely talked about The Coming Ice Age. For a while, it had a sort of stepchild called Nuclear Winter. Years ago when I was doing amateur research for an essay I wanted to write on Betty Friedan, I remember coming across the information that her editors at McCall's magazine had asked her, in the early 1960s, to write an article for them about this Coming Ice Age. She demurred, because she had just gotten some interesting results back from a questionnaire she had submitted to her fellow alumnae from Smith College on the occasion of their fifteenth reunion, and she wanted to write about that. (Perhaps she demurred, also, because she had already written on icy climate change for Harper's in 1958.) So she wrote a whole book about her college friends instead, and you might say the coming ice age had another and momentous stepchild, called The Feminine Mystique.

Anyway, the pertinent article from Pravda tells us that the AGW theory -- Anthropogenic (man-caused) Global Warming -- is full of holes, largely because it is only based on climate data from the last thousand years. More proper collections of data, such as deep Arctic ice core samples and ocean sediment samples, show that the earth goes through regular, even rhythmic, warming and cooling cycles about every 110,000 years. Warming and cooling seem to be caused, in turn, by natural, tiny changes in the earth's orbit around the sun, which expose it to more or less radiation.

And here is where the relation to daily life comes in. As the planet -- which is mostly water, we forget -- warms, the oceans warm. Warm liquids release carbon dioxide to the air more readily than cold liquids. This is why we keep pop, beer, and fizzy wines cold, so they don't lose their CO2 and go flat. The warm oceans release CO2 naturally into the atmosphere, and because now we can keep track of it we panic, think we put the CO2 there first, and yell for the most high lord Government to Impose Standards. In fact, Pravda suggests, not only are we probably at the end of a warming cycle, with maybe eight hundred years' worth of ocean-spewed "greenhouse gas" in the atmosphere, but when Ice Ages do return, be warned -- they return quickly. Problems result. And how's the weather in your neck of the woods?

And what does this have to do with wine? Wine is agriculture, so it has a lot to do with it. When I think Ice Age, I think of cave men hunting mastodons atop glaciers, a mile thick, smothering lands once called Bordeaux or Burgundy. But Decanter happens to carry a recent article about the possibility that Bordeaux wine growers -- alas, probably sadly behind the times -- may soon get permission to plant small quantities of syrah, zinfandel, and chardonnay for experimental purposes, to see whether or not these hot-climate grapes do as well there as the traditional cabernet sauvignon, merlot, semillon, and sauvignon blanc. The results of these plantings, says the mellifluously and so French-ly named Veronique Barthe of Chateau la Freynelle, "may be useful in terms of potential climate change. We can look into which grapes may be able to adapt to and withstand greater temperatures."

To which my riposte must now be, as I blink at all this information, Oh honey. Read your Pravda. You might want to plant ice-loving riesling, and just pray like mad for that. 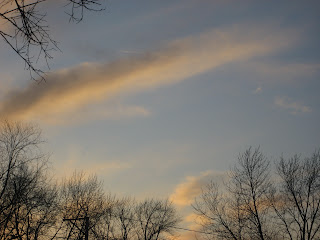