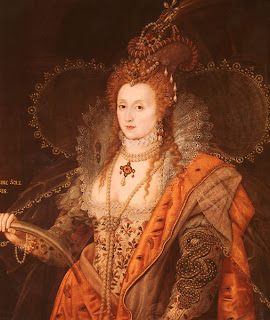 November 17th marks the 450th anniversary of the accession of Queen Elizabeth I to the throne of England (1558), so all good Tudor history geeks must stop a minute and salute her Majesty.

When you major in history in college, you are expected to choose a specialty, inevitably so when you go on to graduate school, where of course the point is to produce original research. My specialty would certainly have been the Tudors, for the sake of sheer interest and spiritual affinity, but I always felt foolish about it. Everybody likes the Tudors. A hundred gazillion romance novelists, bless them, like the Tudors. All that passion and gluttony and wife-marrying, and then Shakespeare and world exploration, and royal persons making fine speeches before beheadings and things. It's so exciting. But "it's so girly," my gynecologist agreed one day, as she was doing her thing and we were discussing What's New With You.

Indeed it is. How fitting it should be a gynecologist, and a woman, who understood this. "Girly." For a century or so, while the Tudors stomped about London and all those vanished Thames palaces, history and religion and war and diplomacy lurked anxiously outside the marriage bed and the birthing chamber. Obstetrics ruled the English court. Professional historians still tot up the miscarriages of queens, and sigh soberly over what might have been, if only this unfortunate baby boy or that had lived. Five centuries on, the history geek, particularly the woman, feels -- or once felt -- really she ought to apply herself to something more serious and worthy, like urban labor movements or changes in early twentieth-century hospital record keeping in the Tyrol or something. Besides, she can't very well do original research on good Queen Bess here on the south side of Chicago.

But true (historical) love intervenes. Having rebuffed graduate school, having spared myself the need to pick a more correct and noble official specialty, I am free to indulge myself now. ("Time to be in earnest," as Samuel Johnson quipped.) And today is Accession Day, which truly does seem to have been celebrated as such well into more modern times in England, even into the pre-World War I era. So there. So, putting aside our girly qualms, what shall we eat and drink to celebrate? Something Tudor, surely.

An article linked through an excellent Tudor blog, run by a woman in Texas as it happens, tells us what not to prepare for our celebrations. In 1558, New World products like tomatoes, potatoes, squashes, coffee, chocolate, and corn would not have been available even for the rich. Tea from China was also unknown. (We take so much food for granted. Somewhere in the famed Paston letters there is, I believe, a record of a banquet for King Henry VIII and Anne Boleyn, at which even such an Old World delicacy as a lemon was not used or consumed, but only displayed in a special cup on the high table, to show the king could afford this.)

So we won't plan a menu around New World comestibles. We'll plan it, assuming to begin with we are fairly humble people, around simple things like coarse bread, porridges, the "white meats" cheese, butter, and eggs, and possibly bacon or other salted meat. So much on the table depended on people's status then, on seasonal produce and on religious observance. Everybody was commanded to eat fish, only fish, during the seven weeks of Lent; perhaps even in November we would still be tired of it, and not want any more. Fresh meat must have been a relative luxury, since animals were only slaughtered twice a year and most of the meat salted and put aside. Simple vegetables like cabbages and onions would have grown in any kitchen garden, and fruits would have had seasons -- apples in November -- we don't always recognize anymore, because so much is available all the time. It seems the Tudors liked their salads cooked, and sweetened.

What is off-putting about the feasts of the upper classes and the very rich -- assuming we climb a bit up the social ladder now -- in Tudor times is the huge preponderance of meats and sweets served together, and jellies and pasties made with weird and fatty fish. Lampreys, for instance. I used to think the point was, again, to show one could afford all this, but it seems the more practical reason was that sweet, pasty, or creamy ingredients mollified the salt-heavy effects of preserved and pickled meats. Then, to move to the bakery, we are startled to see ingredients like rose-water, almonds, and honey in the place of much of our vanilla, white flour, and sugar.

And what would we drink? Ale, beer, and wine, some of that sweetened too. The Tudors might enjoy our drink menu of heavily sweetened carbonated waters and sweet fruit potations for children.

Carrolly Erickson says Elizabeth liked her ale "light and tart," though, and flew into a temper when it spoiled in hot weather and became "as thick and sweet as Malmsey wine" (The First Elizabeth). The Tudors would have had a variety of different wines available to them: claret from Bordeaux, sack (sherry) from Spain, and Rhenish wines (rieslings?) from Germany. All of these were considered "small," that is, light in body and taste. They also would have had heavier, sweeter, more alcoholic offerings, like Malmsey (the malvasia grape), made in the hotter climates of Italy and the Greek east -- Cyprus and Crete. The middle chapters of Hugh Johnson's Vintage trace the story of wine's spread in a western Europe just on the threshhold of the modern age. And incidentally, what was it like to take a sip of wine from public fountains, on great occasions like a coronation, when royalty decreed that all the fountains should run joyously with wine? What else had been sluicing through the plumbing just before?

Never mind. A banquet, then, a full-throttle, meat-and-sweet gentry feast: we'll eat things like meat pastries and eels in spicy sauce, roasts, chicken stewed with crayfish, almonds, and toasted bread, more fish in hot sauce, eel pastries, venison and frumenty (a pudding of whole wheat grains and almond milk), and "jellies." A light, tart ale might be the only saving grace in all that. Add to this the realization that almost everyone struggled, at every meal, with bad and painful teeth. Somewhere in my long and loving amateur study of the time, I remember coming across the factoid that people then believed sugar was a remedy for tooth decay, and that poor Queen Elizabeth herself actually cleaned her teeth with a sugar syrup. (I must find that reference, and then start taking better notes.)