Carrot pudding désastre, and so on

How it takes one back! (as Lucia would say). Georgie, depending on his mood, might answer "my dear, doesn't it" in a tone which also asks, do we really want to go back?

This is Carrot Pudding, Juliènne de Carottes au Gratin, from Richard Olney's Simple French Food (1974, 1992). I call it Carrot pudding désastre because it turned out désastreux. It took forever and  resembled une soupe, though I think it was hardly my fault. See if you can spot the problem in the recipe below.

2 pounds grated carrots
1/3 cup butter
The juice of half a lemon, or more to taste
salt
1 tsp sugar
water to cover
1 and 1/2 cups heavy cream
3 eggs
pepper
butter for the baking dish

Combine the carrots, butter, lemon juice, salt, and sugar in a saucepan. Pour over just enough water to barely cover the carrots. Bring to a boil, and simmer, covered, for about half an hour. Then over a high flame, stirring all with a wooden spoon, cook until the liquid has evaporated.

Leave to cool for about 10 minutes. Whisk together the cream, eggs, and seasonings, stir into the carrots, and pour into a buttered baking dish. Bake for about 35 minutes (at 350 F) until the surface is swelled and browned. 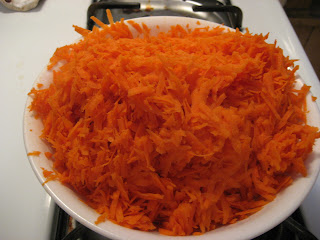 Your two pounds of carrots, grated.

Did you spot the problem? Pouring into a saucepan enough water to "barely cover" 2 pounds of carrots still amounts to a lot of water. The water fills up the spaces among all the shredded carrots, you see. This vegetable gives off a lot of water on its own as well. Covering the pan while you simmer keeps in yet more water. To attempt to cook and stir and evaporate all that excess, after the carrots have boiled to full doneness for half an hour, is hardly the work of one more petit moment.

I suggest you cut the amount of water down to perhaps a cup. That, along with the butter, should be enough to moisten the carrots and encourage them not to stick as they soften up for the spiced, whisked-cream-and-egg custard bath they will soon luxuriate in. The rest of the recipe is fine.

It takes one back because it was all rather long ago. I keep blog posts in draft for a long time. One never knows when they might be useful, but that makes it odd to look at a photograph of a bowl of carrots, or maybe a it's a cake or a plate of Thanksgiving Cornish hens, pre-divorce. I suppose when I grated them I must still have worn my wedding rings, and so on. They now -- the rings, not the carrots -- sit in the bottom of a jewelry box that he gave me. Oh, I don't want you to think I moon. It's just a little odd. I have a friend who pre-empts the problem of passé romantic possessions by giving gift cards to his current girlfriend on Christmas and birthdays, I think because he was hurt at least once by a former girlfriend dropping his old presents of jewelry into an envelope and leaving it on his front porch after a break-up. No more of that, he says to himself. Let her pick something at Macy's.

From time to time, from the day of the shredded carrots and so on, I have considered what to do with my engagement solitaire and the 10-year anniversary diamonds. (We made it to twenty-four-and-a-half before he decided the Internet girlfriend was way cooler, and less judgmental, than me.) The stones are really so tiny and represent so little cash value, and I say it not to whine but merely as a fact, that I think it hardly makes sense to get them made into something else, neither for their own worth nor still less for any sentimental value. What woman wants to repurpose her marriage jewelry? Unhealthy and unworthy of one doesn't begin to describe it.

I have thought, rather, that I might simply take them, plus the silver bangle I bought for myself as a treat one year after selling an article (and which turned out to be impossible to wear -- the bangle, not the article), and sell them all off at a gold-and-silver buyer's shop. Then I might translate the money into a new piece of jewelry. I have a yen for opals, now, possibly because one of the happiest pieces remaining in my jewelry box is an opal ring dating to my teenage years. It was a graduation gift from my parents. Come to think of it opals pair well with little diamonds; opals and diamonds are my father's and mother's birthstones. That seems nice.

Or it might be wisest just to bank the whole whopping $100 against a rainy day. Or buy more carrots, cream, and cookbooks. "Oh, wow," mother said appreciatively one day, when she watched me begin to prepare a bagful of Daucus carota subsp. sativus.(Was I wearing my sentimentally valuable, teenage opal ring? I don't remember.) "Those are big. They look like the kind your sister buys for the horses."