An article about Napa winery foreclosures

Alder Yarrow writes a post in Vinography, April 15, on "The coming carnage in the California wine industry." Dang, there's my title.

The story is simple. It takes a lot of money to produce good wines. Land, buildings, farm equipment, payroll, you name it, it all costs a lot. Even strange little "custom crush" companies, which aren't wineries themselves but which buy grapes, oak barrels, and bottles, and make wine in a rented space and label it under some dreamy fake-farm name, Plushland Hills or something, need financing. When they are finally made, good red wines in particular must be stored for many months before they can be brought to market, which just increases the scary time lag between the investment in them and the recouping of that investment through sales. This is why, Yarrow explains, you see so much California sauvignon blanc. That wine at least is a safe bet, "six months from grape to $."

Naturally, most California wine producers are not running on the private fortune of a passionate owner. They are running on loans from banks like any other business. The collateral they put up to get the loan is their inventory. If they can't pay back debts, the bank "swoops in" and sells off the wine on the market, just as it would a foreclosed house.

Enter the Great Recession. People are not buying expensive Napa wines now. Closed wallets in the liquor store aisles mean stock gathering dust there, and in wholesalers' warehouses and finally in Napa makers' warehouses, too. No money coming in of course means no funds for future production, but a concomitant problem is that all that collateral has lost so much value. Plushland Hills can no longer confidently assure a bank that yes, this stuff will sell for between $30 and $100 a bottle, should you need to take it from us. Not so. People don't want it at any price.

According to Yarrow's sources, there is so much worthless high-end wine sitting on pallets in California that there is no way it can all be sold, not even on internet sales sites which you or I might never have heard of like Cinderella Wine or Wines Til Sold Out. Napa banks don't even want to seize the inventory, because they know its value is going to keep on plummeting. Why take responsibility for trying to unload it?

Mr. Yarrow says it did occur to him that the sources he interviewed might have had some nefarious motive for yelling that the sky is falling, but he "couldn't think of one." Of course he can, and so can I, and so can some of the readers who commented on his article. (Their input is an education in itself, by the way, especially that from professionals in the "wine-related real estate field," i.e., consultants who help failing wineries sell and get out.) Let me elaborate. I got my first lessons in economics from Gone With The Wind, not that I understood them at the time. In the novel, Rhett Butler is an excitingly scandalous character because he is a speculator. He buys anything, cotton, guns, luxury goods, cheap, and hangs on to them in warehouses in London or Charleston or any port, until the demand for cotton, guns, or laces and silks grows so that he can name his own price for it all. Then he sells. He makes a killing and doesn't care whether or not the Confederacy, starved for one thing while he ships another, needs him to follow a more patriotic business model.

Now Margaret Mitchell's grasp of economics might have been a bit shaky -- warehoused goods by definition are not wanted, so why accumulate them? -- but if I were one of Alder Yarrow's sources hyperventilating about the "shitstorm" of foreclosures coming to Napa in the next eighteen months, some variety of speculation might be my motive. Warehouses loaded with wine at someone else's expense, with '06 and even '05 vintages, will be valuable again someday. It's only a question of time. " 'The sharks are circling,' " Yarrow quotes. If I had money, I'd be planning soon to make like Rhett Butler and start buying the wine up cheap, not to warehouse it again but to sell it on the spot. But of course, until the perfect time comes, I'd want to keep all the other sharks away and depress the inventories' value by insisting, in interviews with prestigious bloggers, that the sky is falling. That no one wants this stuff.

It all constitutes a fascinating lesson in what I suppose is the basic economic question, and that is, what makes things valuable? What's the "right" or "realistic" price of a bottle of beautifully made Napa wine?

The answer is that there is no correct price of anything. Things are valuable exactly to the extent people think they are, and always under constantly changing sets of circumstances. We'll all know the correct, just price of high end Napa wines, soon. When they start selling. Is $5.99 unthinkable? But that's six times better than $0.

Meanwhile, California wine producers face the same situation as would-be home sellers since the sub-prime housing crash. Their assets are worth less than their debts. This is especially true of the custom crush companies which don't even have real estate to sell off. A lot of cute little boutique labels, which may have had a loyal following, are going to "vaporize." Or so Alder Yarrow's sources tell him. Is the "shitstorm" even actually on its way, and are hundreds of Napa winemakers and banks "fucked"? (I do wish the sources had been less foul-mouthed. The mixed metaphors are a separate problem.) The astute and experienced readers who commented on his post seem to fall into three groups: those who agree the sky is falling, those who say nonsense, everything is fine and getting better, and those who say yes, Napa is hurting but the wine making trade has always been iffy, and this economic cycle will purge the lightweights who had no business being there.

Meanwhile, the wine sits, the banks sit, Napa sits. Here are some things I would do.

If I were a consumer, I'd use this time to my advantage, to explore interesting and fairly inexpensive product from Italy, Spain, Chile, from anywhere and certainly from less glamorous regions of California (Paso Robles, anyone?). Or I would just shop the sales, as consumers do, and make a mental note to look, in the next few years, for the coming glut of good California Recession wines, already nicely aged.

If I were a wholesale distributor, I think I'd look the wineries in the eye and say, extremely politely, "I hear you're drowning in inventory. I'll pay you X bucks a case, take it or leave it."

If I were a liquor store owner, I think I'd look wholesalers in the eye and say, extremely pleasantly, "I hear they're drowning in inventory. I'll pay you X bucks a case, take it or leave it. And no deals about a twenty- or a fifty-case 'drop' (a drop is a delivery amount and/or a required purchase quantity). Send me three." And to any outraged sputterings about "realistic" or "true" value, I would answer, "Yes, you're welcome, I'm trying to help you sell your wine."

And if I were the CEO of a great big place like Gallo, why, my goodness. I would be salivating now at the prospect of buying up dozens -- scores? hundreds? -- of defaulted properties in Napa Valley. Imagine slapping that 0-85000 bar code on a lot of new bottles, and quietly presenting Plushland Hills, or who knows? Cakebread, Duckhorn, or Silver Oak to the world as a Gallo brand for $12.99, $9.99 on sale. I imagine Gallo would have as much sense as Rhett Butler under these interesting circumstances, wouldn't you? -- or as any savvy consumer hanging on to his money and deciding what price is right. " 'Slow money on the upbuilding, fast money in the crack-up,' " Rhett reminds Scarlett O'Hara when they discuss how to get rich when countries (read industries) rise and when they fall.

But I merely ... speculate. And I do bet Gallo will be okay. 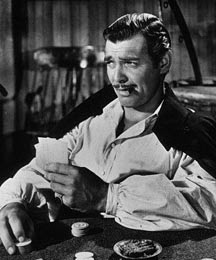