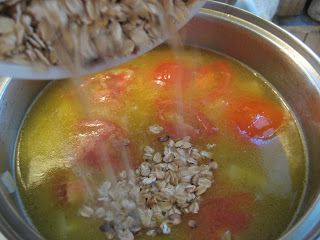 From The New York Times Bread and Soup Cookbook, by Yvonne Young Tarr (1972). "Unbelievably delicious," she writes, giving it three asterisks alongside the title, which indicates it's a recipe that her family frequently requested.

The idea of oatmeal being anything other than a porridge served plain at breakfast may seem too odd; and yet as luck would have it, I encountered Mexican oatmeal soup at about the same time I found a "receipt" for a very old dish called a "flummery caudle," in William Carew Hazlitt's Old Cookery Books and Ancient Cuisine (yay, Project Gutenberg!). A flummery caudle was a mixture of oats cooked in water, left to thicken overnight, and then seasoned with wine, mace, nutmeg, lemon and orange juice, and butter and sugar, and eaten for breakfast.

Just reading that expands the mind, and prepares it for the combination of oats, chicken stock, tomatoes, and garlic, to be eaten for dinner. What makes it authentically Mexican? Mrs. Tarr -- and yes, even in 1972, she was not Ms. but Mrs. Tarr -- does not say.

Toast the oats in a large heavy skillet, until they are browned but not burned. Put the toasted oats in a bowl and set aside.

Melt the butter in a skillet, and add the onions and garlic and cook gently until they soften, about five minutes or so. Then add the tomatoes, broth, and salt, and pour in the oats. Bring to a boil and boil for six minutes over medium heat. Serve hot.