There's nothing like the word French, in any recipe -- in any human endeavor, for goodness' sake -- to make the thing seem special. My modest Webster's dictionary lists no less than eighteen items, from knots to flowers to a way of departing a social gathering ("French leave") carrying the sacred modifier. Really there ought to be nineteen of these at least. The dictionary writers forgot the French twist hairstyle. And does anyone mind that tagetes patula (French marigold) comes from Mexico?

No? Good. So then what makes this potage a "French" spring soup? Perhaps the addition of cream at the end. Perhaps just the name. It comes from the Good Housekeeping Cookbook, published in 1963. Good Housekeeping, whether the magazine or its cookbooks, usually serves as a reliable source of worthy recipes, but I must say this particular edition also includes the worst professional food photography I have ever seen.

This is a little surprising, because you can tell they were trying. By the 1960s, food styling and photography had begun to come into their own as arts. The use of more natural lighting and more gracefully staged backgrounds had begun to give pictures of food the look of something you would actually cook and eat and put on your table. This is as opposed to the blurry surrealism of food photography in cookbooks and pamphlets from the 1940s and '50s, in which crowded banquet tables groaning with colorful roasts, fruit salads, and platters of baked Alaska seem to have been quickly snapped in some kind of glaring, depthless anti-light, spinning somewhere in outer space. Yes, the photographers at Good Housekeeping were trying -- there's a bit of art in the napkin and the fake grapes draped over the wicker basket, and in the bottle of oil-and-vinegar (truly "French"!) salad dressing poised nearby. It's just the food stylists who had no clue. Or perhaps, by sheer coincidence, all the recipes that got the color-plate treatment were duds? Slices of cold roast beef neatly layered into, and neatly cascading out of, a huge, footed, clear glass bowl, do not make me ever want to prepare or eat "Roast beef hearty party salad." The same goes for "Honeydew salad supper," which seems to be red strawberries and white cottage cheese stuffed into the pale green melon, and "Shrimp casserole Harpin," which seems to be orange glop.

But the potage printanier, French spring soup, is a winner. If you'll indulge me, I'll provide the picture. 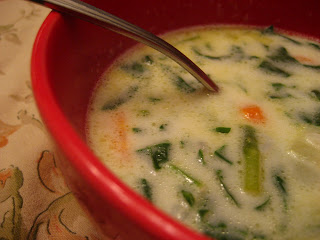 You begin the recipe by sauteeing 3 chopped leeks and 1 chopped onion in 3 Tbsp butter, until they are nicely softened, about 10 minutes or so. 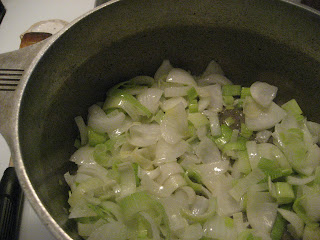 Bring the soup to a boil, cover, lower the heat, and simmer 15 minutes. Next, stir in 1/4 cup uncooked rice and 12 stalks asparagus, chopped into 1 inch pieces. Cover again, and continue simmering for another 25 minutes. 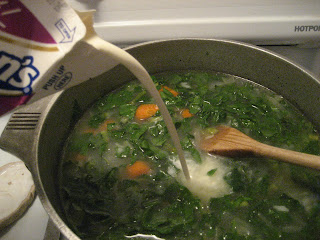 You may notice that the recipe calls for 5 and 1/2 teaspoons of salt in total, which is almost 2 Tablespoons. Cookbook writers before about the mid 1970s do not seem to have been concerned with our great bugaboos, salt and fat; they wrote mostly for women anxious to get the most out of their food dollars, not for women anxious about health. James Beard in one of his books frankly complained that half the problem with most people's cooking was that it lacked the salt needed, not to taste salty, but to taste right. Don't be shy, he exhorted. In fact, if memory serves, he may have been the master who declared that no soup will taste right unless a full Tablespoon of salt is allowed for every quart of liquid. That would put him in happy agreement with the test kitchen staff who laid down the salt instructions for this potage. I mention it all, not to quail before the modern bugaboos, but to allow that indeed this soup is very salty -- very good, but very salty -- and to allow that perhaps you will want to use a more discreet hand with the measuring spoons, for taste's sake.

And as for that beef salad: perhaps you will want to judge the photo for yourself. If we call it French beef salad, will it look better? 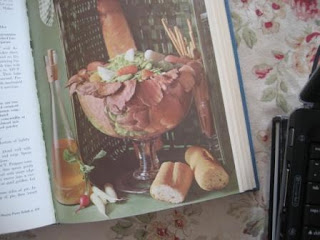