It's been a mild winter, so the photo of berries in snow is not quite appropriate yet. I offer it up as a kind of token or remembrance of what surely must be coming. 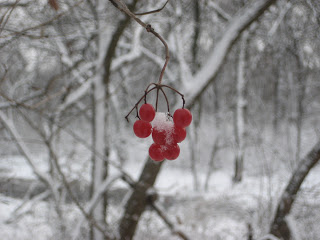 What a striking thought, even for a storybook character. Most people hate winter, hate its gray days, its  cold and barrenness and bad driving conditions. But wouldn't it be a pleasant thing to have a disposition such that one didn't? -- didn't, after all, hate half the year? Or, what seems like half the year.

If we aren't already blessed with that disposition, perhaps we can create it. No really. Even if it does make us sound like hopeless saps. We might go back in time and consult the best authors about how mankind has ever coped with this ever-grim season. We might amuse ourselves with learning what work people did then, what they ate and drank, how they beguiled the time. Not for nothing did they invent Saturnalia and Christmas.

Assuming it is true for a start that the vast majority of all people, everywhere, have always been subsistence farmers, then our ancestors' experience of winter is already rendered totally different from our own. No less an authority than Virgil re-introduces us to the season:

Winter's an off-time for farmers; then they mostly enjoy their gains, hold jolly
Suppers amongst themselves.
Genial winter invites them and they forget their worries;
Just as, when ships in cargo have come to port at last,
Glad to be home the sailors adorn their poops with garlands.
Yet even now there's employment in season -- acorns to
gather
And berries off the bay tree, and olives, and blood-red myrtle: Now you can lay your traps for the crane, your nets for the stag,
Go coursing long-eared hares, or whirl your hempen sling
To bring the fallow deer down --
Now when the snow lies deep and streams jostle their pack-ice.


This is from the Georgics, translated by C. Day Lewis in 1940. The passage seems to tell us that winter, when no farming can be done, is the time to forage and hunt. "Genial winter" is startlingly pleasant, but the reference to acorns seems sinister. A little earlier in this Book 1 of the Georgics, Virgil had briefly sketched the whole history of agriculture and had noted that if you do not work hard at your farm and have a bit of luck with the rains,

Vainly alas you will eye another man's heaped-up harvest,
And relieve your own hunger by shaking an oak in the woods.


He didn't mean, of course, that you would shake an oak tree and then walk away. He meant you would gather the dropped acorns and, in some fashion, eat them. The Oxford Companion to Food says that if the tree was the "holm or holly oak," Quercus ilex var. rotundifolia common around the Mediterranean, the acorns might have been "comparable to and eaten like chestnuts." If the tree was the Q. robur of Britain or northwest Europe, the acorns would have been tannin-filled and "only used as human food in times of famine". Either way, oak-tree shaking in ancient European winters did not represent a genial situation.

Virgil also wanted to know why winter came at all. In Book 2 he hopes his chief goddess, Poetry, will reveal to him

The reason why winter suns race on to dip in the ocean,
And what delays the long nights.


Five centuries before his time, Herodotus' answer was that storms in upper Libya routinely blew the sun "out of his course" and far to the south (The Histories, Book 2, translated by Aubrey de Sélincourt, 1954). This not only shortened the days and lengthened the nights, but affected seasonal evaporation rates from rivers and explained the flooding of the Nile in summer, which was unique. All other rivers flooded in winter, when they were swollen with rains and when the sun, blown thus far away into Africa, was busy burning down upon the Nile but on nothing else. In summer the sun returned to "his normal course in mid-heaven." (A quite Eurocentric view, no?) The Nile then enjoyed relief from evaporation, and rose into flood just when all other rivers submitted to the sun's drying heat again, plus were missing the burden of their winter rainfall.

Our ancestors' actually living in a mental world so vivid that they believed -- or at least Herodotus, historian, traveler, "person of great charm and Shakespearean width of interest in humanity" believed -- that winter came because the wind blew the sun away makes our own complaints about the season seem awfully plodding. So it's cold and gloomy and the Christmas shopping crowds are annoying and the roads can be bad. Well, yes.

While we marvel at the image of the sun whirling away over Libya it might be fun to segué into a recipe from antiquity, not necessarily a wintry one but one that does happen to come from the very oldest Western cookbook anyone knows. This is De Re Coquinaria (the Art of Cooking) by one Marcus Gavius Apicius, a Roman gourmet from around Virgil's time. But wait. -- We do want to be scrupulously scholarly. This is a problem. We foodies are forever being righteously scolded that any recipe from any period before, say, 1940, is by definition a chronicle of something only the horrible Rich would have eaten, something filled with expensive meats or fruits or sauces that the poor could never have known; therefore, all recipes before our own time are by definition inauthentic, if not just plain trite. It's not that no one prepared or ate them, it's just that they somehow still aren't real or right enough.

Now. Granted. Apicius' flamingo tongues do sound a bit overcultivated. And yes, in famine our ancestors did choke down acorns, and worse. But on the other hand, what was so impoverished -- or what was so exceptionally grand -- about Virgil's cranes and olives, or about the spelt bread, barley wine, fresh fish and pickled ducks that Herodotus saw in Egypt? (Herodotus called Egyptians "next to the Libyans the healthiest people in the world.") Let us go back even further. In the Odyssey we meet Homeric heroes who eat the simplest things. Venison and wine. Pork, "loaves," and wine. Barley. Cheese alone. So were these heroes rich or poor? In the present political and scholarly climate it seems so important to categorize people, and to have one's hatreds all in order.

We're not haters, so for the moment we'll put aside the question, and we'll put aside the scarcely touched Apicius, too. Here instead is a kind of recipe for roast pork, from Book 14 of the Odyssey, translated by Robert Fitzgerald (1961). The cook is a swineherd, Eumaios. The guest is noble Odysseus himself, returned to his home but disguised as a stranger.

Bronze axe in hand, he [Eumaios] turned to split up kindling,
while they drove in a tall boar, prime and fat,
planting him square before the fire. The gods,
as ever, had their due in the swineherd's thought,
for he it was who tossed the forehead bristles
as a first offering on the flames, calling
upon the immortal gods to let Odysseus
reach his home once more.

Then he stood up
and brained the boar with split oak from the woodpile.
Life ebbed from the beast; they slaughtered him,
singed the carcass, and cut the joints.
Eumaios, taking flesh from every quarter,
put lean strips on the fat of sacrifice,
floured each one with barley meal, and cast it
into the blaze. The rest they sliced and skewered,
roasted with care, then took it off the fire
and heaped it up on platters. Now their chief,
who knew best the amenities, rose to serve,
dividing all that meat in seven portions --
one to be set aside, with proper prayers,
for the wood nymphs and Hermes, Maia's son;
the others for the company. Odysseus
he honored with long slices from the chine --
warming the master's heart. Odysseus looked at him
and said:

"May you be dear to Zeus as you are dear to me for this, Eumaios,
favoring with choice cuts a man like me."