What with Christmas only a week away, it seems appropriate to revive this entry into the "Baking 101" catalog that I began to compile during my brief stint as Examiner.com's Chicago Baking Examiner. Here we learn a little about sugar, even consulting children's books for basic information. Consider: what ingredient do we suddenly eat more of, during the holiday baking season, than sugar? Perhaps something outranks it, maybe butter, but we would still be dismayed to learn how much our consumption of the white sweet stuff skyrockets come December. The stock kids at the store haul out pallet after pallet of it, four pound bags stacked high, sometimes tracking a thin sugar trail across the floor if there's been an unnoticed spill. Hard to believe there was a time when our ancestors did not know sugar -- nor chocolate, coffee, or tea, nor very much good wine -- and made their Christmas cakes and cookies festive instead with the subtleties of honey, almonds, saffron, and rose water, and their meals festive with homemade beer of who knows what quality.

So, sugar. Examiner.com liked everyone's posts to be short and "news-y." 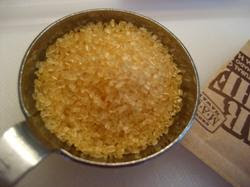 White, refined sugar was not known in Europe until after Crusaders brought it back from the middle East around the year 1100. Even then, sugar was used primarily as a medicine. Physicians mixed it with other drugs to disguise their taste. Sugar in cooking and baking was a luxury reserved for the rich until about the 1700s. What finally made sugar more available to all classes was simply the massive production levels achieved, in the sugar islands of the Caribbean and in South America, through the use of slave labor.

All plants contain some natural sugar, which usually is concentrated in the plant's fruit. Even a lemon has 1% sugar. Sugar cane -- technically a grass -- has more sugar in it than any other plant except sugar beets. Its sugars are found in the juices inside the mature cane. To eventually get solid white sugar crystals out of the plant, the canes have to be chopped and pressed, and the sticky juices repeatedly mixed with water, boiled, evaporated, and whirled in a centrifuge. Each time this is done, the liquids whirled away become another batch of molasses, and the solids left become a whiter, more refined sugar.

Raw sugar, pictured here, is sugar that been through a centrifuge and had some molasses whirled away, but has not had all that molasses coating washed off all the crystals. White sugars (granulated, cubes, superfine, or powdered) have been redissolved and reprocessed not only to remove the molasses but to eliminate the impurities within the crystals which also contribute to sugar's naturally brown color. The commercially available "brown" sugars, light or dark, are refined white sugars which have had molasses added back to them.